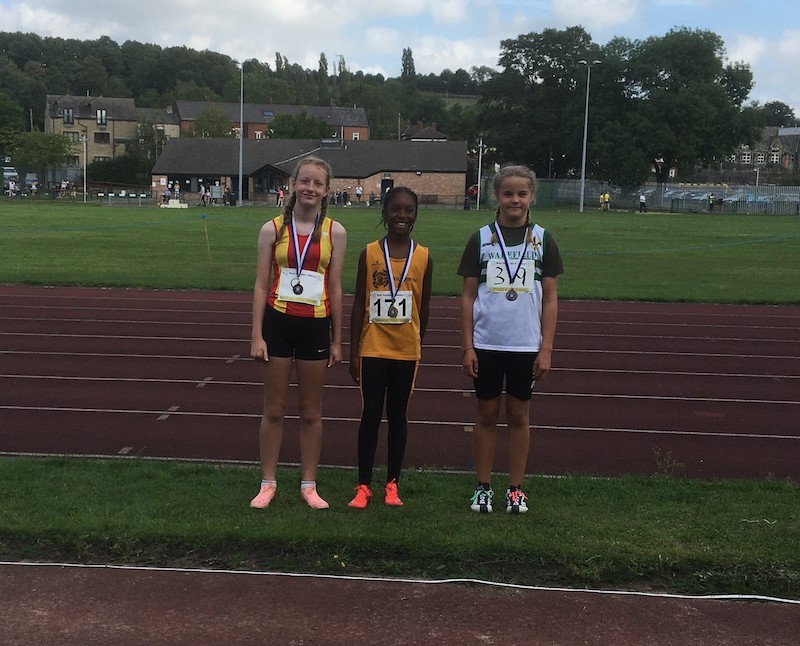 The final outdoor meeting of note for our athletes this season took place on Sunday 11th September. We had 13 athletes signed up to compete at this event across a range of events and ages. A headwind in the final straight meant there was little realistic chance of getting a PB or even a season’s best and this was reflected in most of the sprint times being down on previous events. However, it was the same for everyone competing and the good news was that such a small group of athletes could come away with such a big haul of medals, and those who didn’t get a medal did themselves proud with some fantastic performances.

Here’s a breakdown of the results from our athletes, for the full results see the link below:

Soraya Thomas: Tremendous performances for Soraya winning the 75m, winning the Long Jump with a big personal best (3.71m) and coming second in the Shot Put also with a new PB. She also collected her trophy for being the best female athlete overall in her age group in the league.

Tom Martindale: A successful day for Tom coming 2nd in the Shot Put with a PB, 3rd in the Long Jump with 3.56m a PB and 3rd in the 75m. Tom also collected his trophy for being the 3rd best male athlete overall in his age group in the league. A great haul for his debut season in athletics.

Liv Cottam: Just missed out on making the finals of the 100m and 200m but managed a big PB coming 7th in the Long Jump. Liv only started athletics recently and so is competing against athletes who have been doing it for much longer but she more than held her own.

Jess Martindale: An excellent 2nd place in the Shot Put with a superb new PB but in the long jump unfortunately she had 3 fouls. Had she not fouled the jumps she was doing may have been good enough for a medal, regardless Jess will have learnt from the experience.

Chloe Law: A Superb 2nd place in the 100m final followed by 6th in the 200m final and 4th in the Long Jump where she was just 1cm off third place. A busy day with heats to make it into the finals meant 4 races and a Long Jump in one day – a big effort. Chloe also has the advantage of having another year in this age group.

Emily Wood: 1st place in the 800m with a well-judged race and another PB – she has improved her track times with every race this season. Emily has competed for the club in cross country for several years, so it was great to see her have a go at track this year and she’s been well rewarded.

Florence Jones: 2nd place in the 800m with a string finish to achieve another PB. She just missed out on the 100m final and came 6th in the Long Jump. Like Chloe, Florence still has another year in this age group and is proving to be a good all-rounder as she also represents the club in cross country.

Joey McLaughlan: 8th place in the 100m final and then 7th in the Long Jump. Joey is one of the youngest boys in this age group and if he keeps showing the determination, he has shown this season he is sure to build on his own personal bests because he is so enthusiastic.

Sam Standing: 3rd place in the 200m in a time of 26.9s – only marginally outside his PB even though it was into a strong headwind. Long Jump 5th place – had he been closer to the take-off line on his best jump he may well have collected another medal and PB but it’s all about the experience and this was his first year competing against athletes who have been competing for a few years.

Eve Dutton: 4th in the 100m and 4th in the 200m. Both races contained tough competition and unfortunately Eve narrowly missed out on a medal in both events. However, more great experience and it’s the end of a busy season where she’s been ever-present for the club at both the West York’s League and the senior Northern Track and Field League.

Isabel Richardson: 1st in the 1500m. Isabel was dominant as she ran away from the rest of the field from the gun for a victory by a huge margin. She clocked a time of 4m 51secs which is impressive given than she ran it solo and if pushed may have been able to go quicker.

Eddie Hinchliffe: 1st place Javelin. Arguably the performance of the day in the entire competition given that he won with a new championship record. He was a clear winner of the event with 55.10m and beat the previous record that dates back 33 years. Its good to see records being broken by a Holmfirth Harrier.

Will Lander: A great day as he took 1st place in each one of the sprint disciplines: 100m, 200m and 400m. 3 gold medals in total was a tremendous effort and is just reward for Will who consistently turns out for the club and makes himself available for all the Track and Field league meetings.

Well done everyone who competed. Also, a big thankyou to all the officials and volunteers from our club who gave up their time to help make it happen, Officials: John Buckingham and Brian Heywood; Parent Volunteers: Liam Martindale and Andy McLaughlan