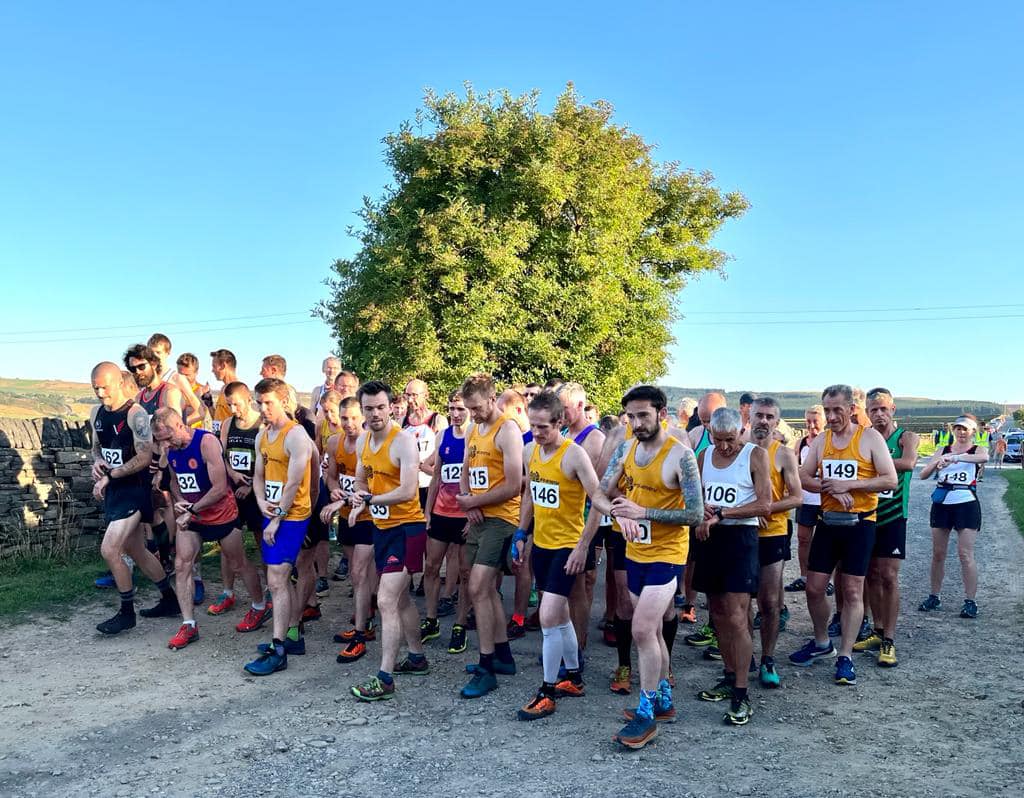 Evening everyone – hope you had a good weekend. Time for the latest Fell Update, which is probably shorter than usual, thanks to the holiday period! We had a couple of championship races in August – first up, a return to Cartworth Moor CC for the Denis Stitt Memorial on Thursday 11th August, where we had 30 Harriers amongst the 61 competitors, with plenty of prize-winners on a very warm evening!

It was also the Burnsall Classic on Saturday 20th. I haven’t seen the final official results yet, but my spies tell me we just had 2 seniors taking part, so well done to Adam Sunderland (28th in 21.36) & Keith Baird (33rd in 22.19), for bagging some decent points for the champs!

In terms of the senior Fell Champs, after 11 races, the men are currently being led home by Tim Brook, who has completed 7 races, plus the Calderdale Way Relay, so is on 186 points (although he needs to complete the remaining Short race to qualify). Hard on his heels, we have Adam Sunderland, Keith Baird & Curtis Firth, on 162, 152 & 151 points respectively. For the ladies, it doesn’t look as if anyone will be able to complete the required number of races, which is a shame. Injuries & other priorities seem to be winning out!

Coming up, we have the Bleaklow Blitz on Sunday 11th, followed by the Cross Keys Road & Fell Relay on Saturday 17th September. So far I can see that we only have 4 entered at Bleaklow, so time to get your entries in, as I don’t think they will take EOD – Mark Law & Andy Shelbourne did this last year & it looks a decent race. Plus it’s a bargain at £6.80 to enter!

As I’ve mentioned previously, still needing volunteers for the 2 fell relays in October – the Hodgson Brothers on Sunday 2nd, where we definitely have 1 team entered & I’m hoping we will be allowed another (we are first reserve for what is always a popular & over-subscribed event) & the FRA Fell Relays in the Scottish Borders on Saturday 15th, where I have entered 4 teams (Mens, Ladies, V40’s & V50’s), so just waiting to hear if they have all been accepted. I have booked a number of rooms at the Days Inn Hotel in Lockerbie on the Friday night before the FRA’s & the club usually subsidises the cost for the runners, so no worries on that score. Please let me know ASAP whether you can run or not – trying to avoid any last minute scrambles!

Elsewhere in September, we have a few local races to consider, including:

That’s all for now – don’t forget to let me know about the relays.