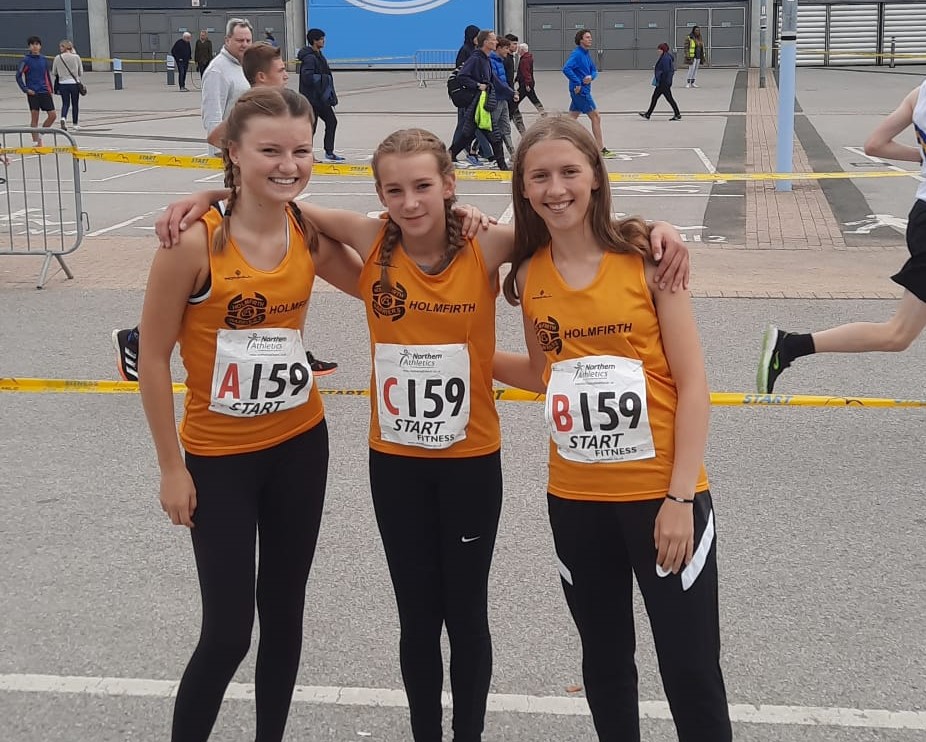 Holmfirth Harriers turned out in force last weekend as they fielded two men’s teams, three women’s teams and a u15 girls’ team at the Northern Athletics Autumn Road Relays at Sport City in Manchester. 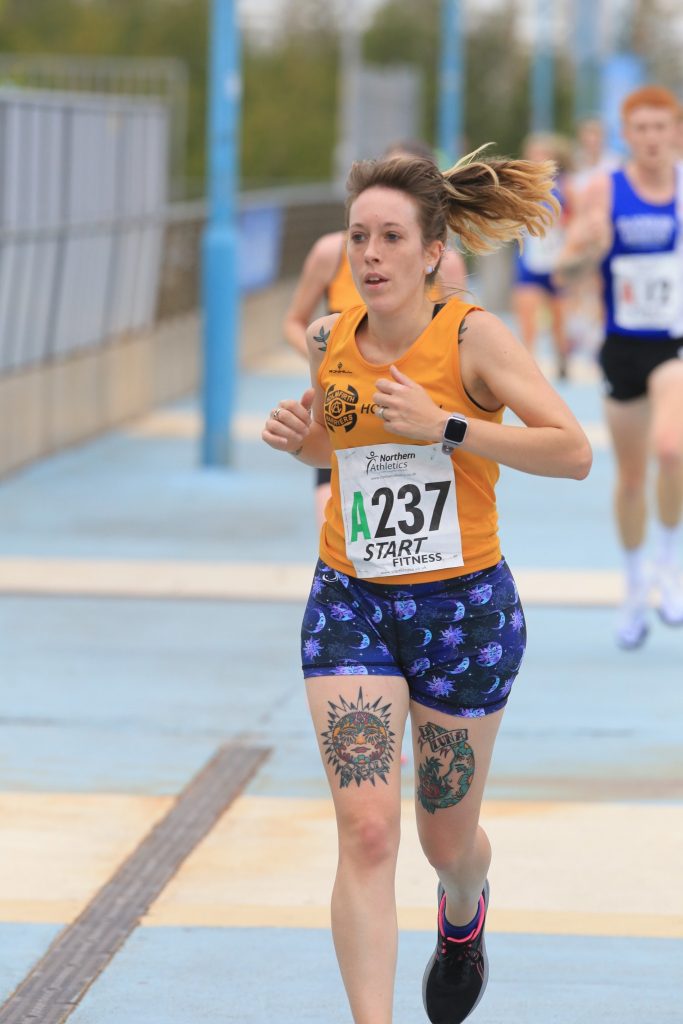 Both men and women ran a flat and fast 6.8km course, with the men in teams of six and the women in teams of four. Each leg began on the track at Manchester Regional Arena – which was the warm-up track for the Commonwealth Games – before the runners headed out into the Etihad Campus and ran two laps around the stadium and car park before finishing back on the running track.

Isabel Richardson got the women’s ‘A’ team off to a good start in 38th place (26:14) in a field of 83 runners on leg 1. Claire Leaver-Hewitt took over and ran strongly through the field to take the team up to 28th place (26:16), before Ruby Sykes’ fantastic run further improved the team position as she returned in 14th (24:46). Helena Croft then ran the anchor leg and only dropped three places (26:30) as the team finished in a very credible 17th place amongst some very strong competition. 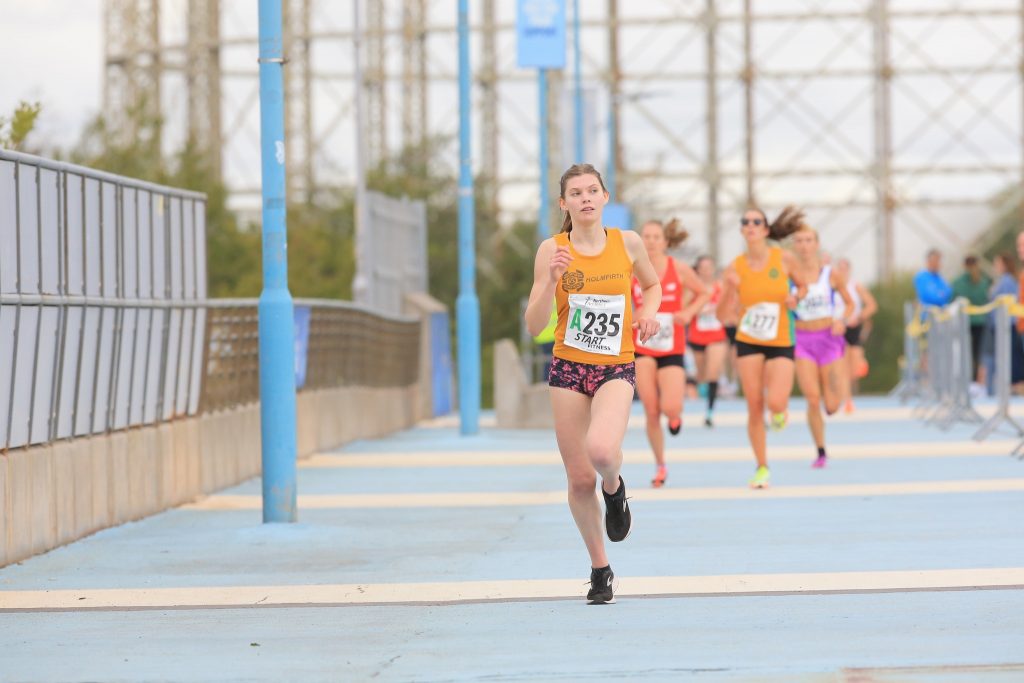 The ‘B’ team’s race began with Helen Haigh running a storming first leg coming back in 25th (25:28) despite only recently coming back from injury. She was followed by Helen Standing – demonstrating great team spirit as she ran despite not feeling 100% – who came back in 47th (29:28). Amy Smith then ran strongly on leg 3 and only dropped one place as she came back 48th  (29:56), before Nicola Brown’s excellent run maintained the team’s overall position on the anchor leg (29.25).

Sophie Cromwell led off the ‘C’ team on the first leg, coming back in 82nd (31:45) and claiming a new 5k PB for herself. Liz Woodfield – taking part in her first race for nearly two years – ran the second leg and did fantastically well to take the team up nine places (30:22). Becky Burdon then ran the third leg after stepping in for the team at the last minute and had a very strong run as she only dropped four places to came back in 77th place (34:27). Noreen Edery – another runner coming back from injury – ran the anchor leg, and despite being incorrectly told to do an extra lap by a marshal, still managed to come back in 78th place (46:20) in what was an excellent performance considering she ended up running 9km!

The women’s race was won by Salford Harriers & AC in a great spectacle where the lead changed hand three times. Leeds City eventually finished in second place, with Vale Royale edging out Lincoln Wellington for the final podium place. 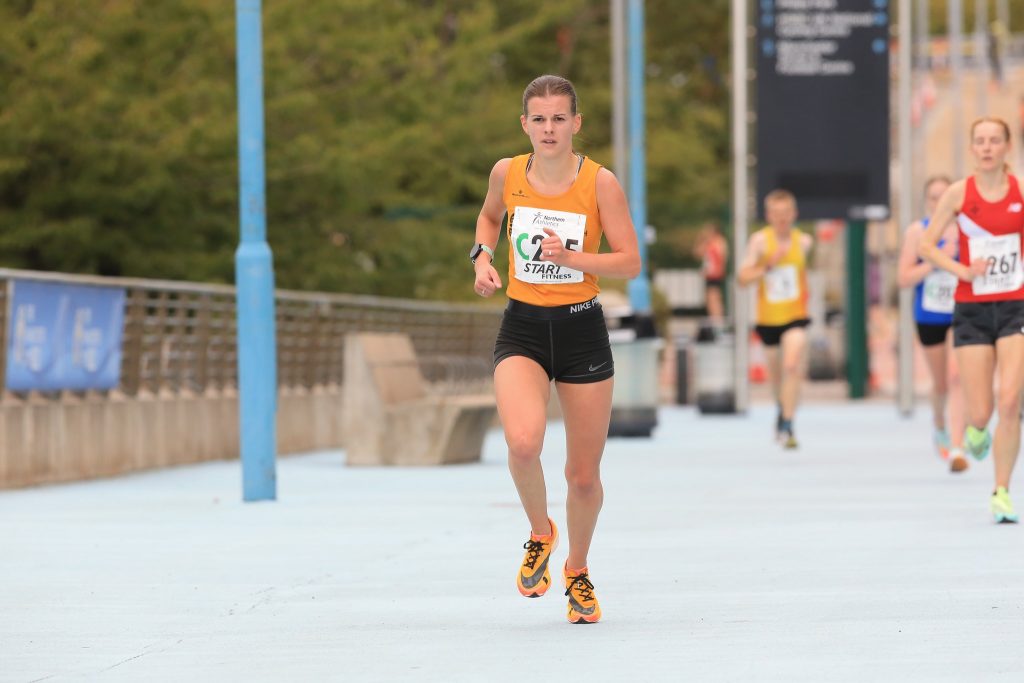 The men’s event had a record entry of 110 complete teams from across the north of England, which was a great spectacle to see as the first leg runners congregated in front of the starter on the track. Kai Sunman ran a very well measured first leg for the ‘A’ team, as he refused to get carried away in the frantic start and instead steadily worked his way through the field to come back in 35th place (21:19). There wasn’t much to separate Philip Hewitt on leg 2 (24:33) and Alex Hannay on leg 3 (24:35) as both ran well, but the sheer quality of other clubs meant that several places were lost. Oliver Glover ran an excellent fourth leg to claim back 12 places (23:24), before Tim Street had a solid run to climb another four (22:53). Lewis Byram ran the anchor leg (22:32) and brought the team home in 53rd position. Unfortunately this wasn’t enough to qualify for the National Autumn Road Relays in a couple of weeks’ time, but the team will no doubt be back next year to have another go.

Michael Sanderson ran the first leg for the ‘B’ team, coming back in 108th place (25:02). Craig Sheard then ran almost two minutes quicker than he did on this same course last time out, and did fantastically well to only drop another five places on leg 2 (27:56), before Adam Sunderland reclaimed one place as he came back in 112th (27:44). Matthew Rose continued his recent excellent form as he took the team up to 109th (26:39) – clocking another sub-20 5k in the process – before Brandon Holroyd took the reins for leg 5 and climbed seven places to come back in 102nd (26:34). Tim Brook – who was a late replacement – then ran the anchor leg, and despite racing in the YVAA Grand Prix in the morning still managed to clock the quickest time of the ‘B’ team as he brought the team home in 95th place (24:42). 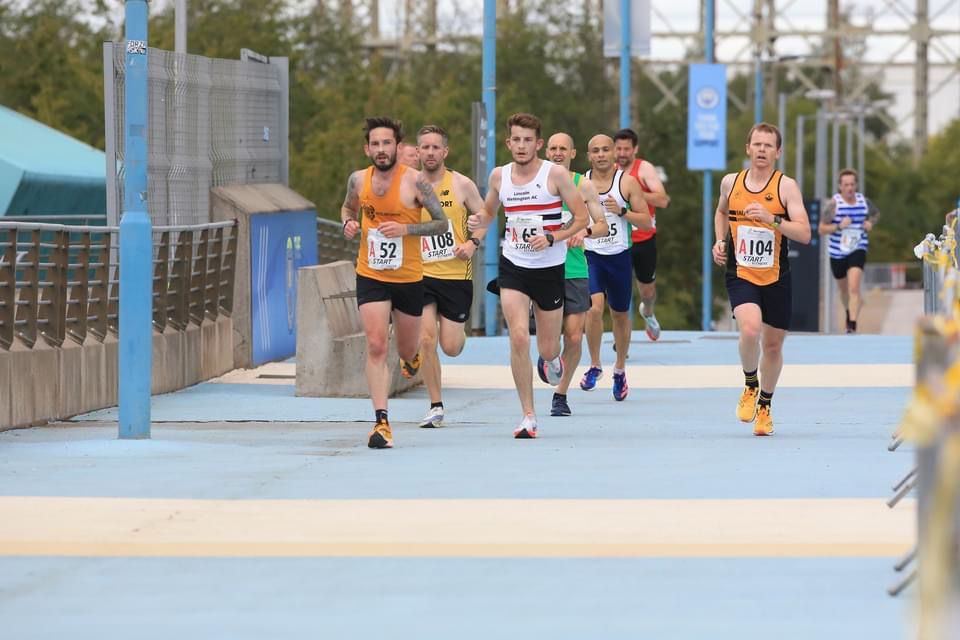 The men’s race was won by Leeds City AC – the third successive year that they have won this event. Hallamshire claimed the silver medal, whilst Blackburn came third.

The under 15 girls was the only junior race with representation from Holmfirth and the trio did really well amongst tough competition. Isabel Coulson was first off in a busy field of 46 athletes. She ran a great time of 15:31 and handed over to Sophie Mayes who ran 16:43. The field was beginning to thin out by the last leg and Florence Jones did well to pick up a few places, bringing the team home in 40th place in 16:34.  There were a few incomplete teams in this race, so it was excellent to see Holmfirth fielding a complete team.