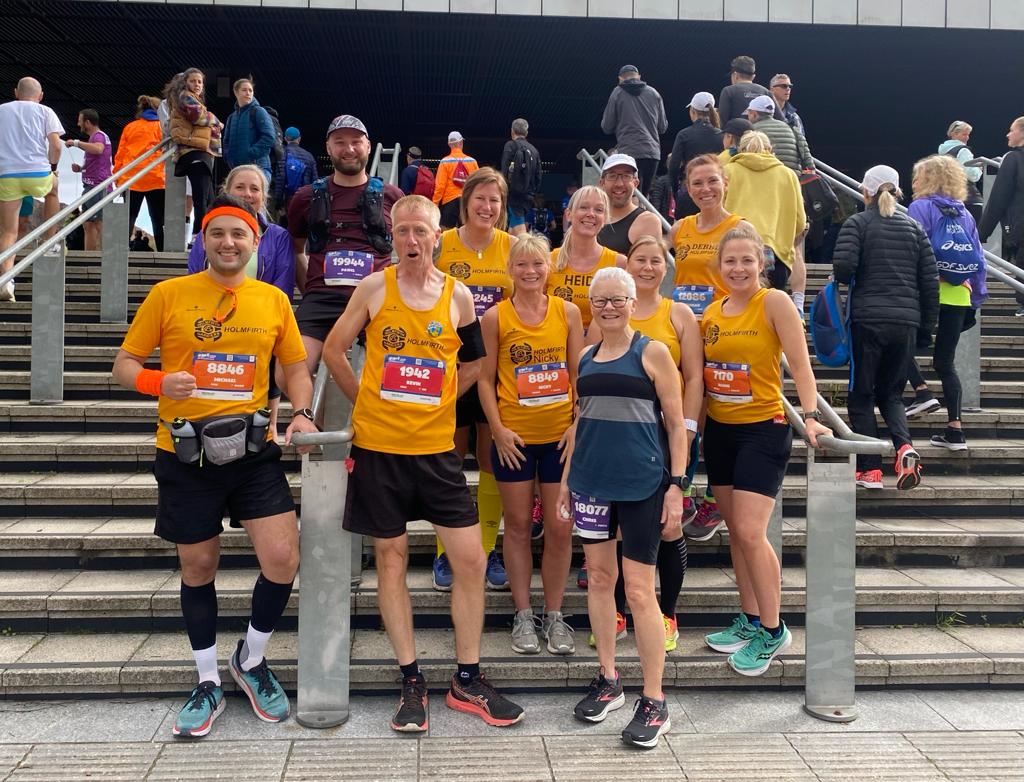 Just a quick round-up on what everyone’s been doing on the road during May.

The Leeds Half Marathon was the fourth race in this year’s championship and was held on Sunday 8th May. The undulating race starts in the city centre before heading out towards Headingley and Meanwood. It then passes by Kirkstall Abbey, before a fast and flat return to the city centre where it finishes in Millennium Square. Nearly 4,000 runners took part this year, with the race being won by Joe Sagar of Spenborough & District AC in 1:08:07.

Seven Harriers made the trip across to Leeds on Alex Hannay in 1:23:19, whilst the first female was Erica Byram in 1:29:13. There were also a few personal bests recorded, with Anthony Waring (1:30:50), Andrew Clarke (1:57:11) and Deborah Clarke (1:57:12) all recording their fastest times over the distance. Special mention should also go to Sophie Heap, who was (I believe) racing in her first half marathon; she certainly could have chosen an easier one!

Full results can be found here: [Leeds Half Marathon Results]

In terms of the Men’s Championship, Anthony Waring (72 points) has now raced into the lead courtesy of his good run at Leeds. Michael Sanderson (57 points) has dropped to second, with just 10 points separating him from Kevin Dessoy (47 points) in fifth.

In the Women’s Championship, Amy Smith (80 points) still leads the way, although no other women have yet competed in more than once race. There are still six remaining though, with six results to count; anyone could still therefore win the overall championship.

Amy (63 points) has slipped to second in the Age-Graded Championship however, as Anthony Waring (75 points) has also assumed the lead in that competition. Rob Kersey (57 points) is not far behind in third place despite having taken part in one race less, with Kevin Dessoy (53 points) and Michael Sanderson (51 points) completing the top 5.

The organisers of the Burnsall Feast Sports have announced that they will not be staging the 10 mile road race this year owing to issues regarding traffic on the roads. This is a huge shame, and I know many members were looking forward to the ‘double header’ of completing the road and fell race in the same day. I have therefore removed this race from the Road Championships and have replaced it with the Askern 10 which is taking place two weeks earlier on 14th August. Entries are not yet open for this event, but I will make members aware once they are.

We had a great turnout of 51 runners for the Dionne Coburn Memorial Club 5 on Tuesday 17th May, and it was especially good to see so many new faces getting involved. The race was won by Damian McQueen in a time of 29:38 – just seven seconds ahead of Curtis Firth (29:45) who claimed second place. Helena Croft (30:30) was the fastest female, whilst Sarah Hall (42:03) was the first ‘novice’. Damian’s time also meant that he claimed the Tony Mellor Cup for the fastest handicap.

Andrew Clarke, Deborah Clarke, Tracey Newman, and Nicky Evans all ventured across to Cheshire on Sunday 1st May to race in the Alderley Edge Bypass 10k. The race features a fast out-and-back course in countryside and farmland on fully closed roads. Despite going into the race with no expectations, all four runners managed to record PBs; a great effort by all!

Elsewhere we had no fewer than 12 runners taking part in the Edinburgh Marathon on Sunday 29th May. Kevin Dessoy was the first male back with an excellent PB of 3:10:42, whilst Nicky Ottaway was the first female back in 3:47:27 – a fantastic time in her first marathon. Pawel Przedaszek was also racing his first marathon (and his first race for the club!), whilst Heidi King (4:17:02) also recorded a PB; well done to everyone that took part!

Next up in the Road Championship is the Dr Ron Hill Hyde 7, which takes place on Sunday 19th June. This is the final event in the ‘Tour of Tameside’ running festival and features an undulating race on closed roads.

Places are still available should anyone wish to sign-up: [Dr Ron Hill Hyde 7]