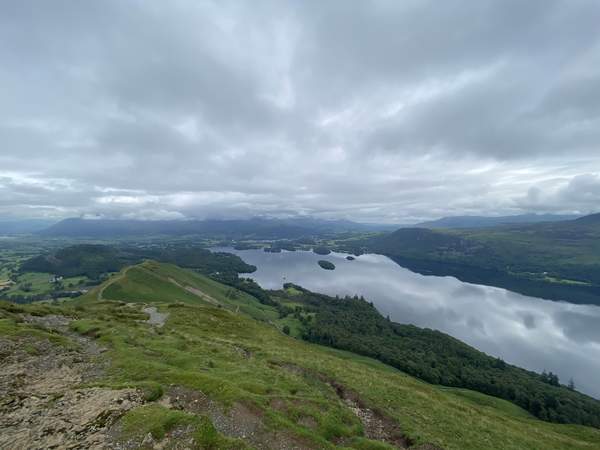 Tim Street describes his successful attempt on this lakeland classic.

Not quite as serene as it sounds, Abraham’s Tea Round is an approximately 30 mile route with circa 12,000 feet of ascent (and descent – more of that later) that starts and finishes at the doors of George Fisher in Keswick. You’re then to go and summit Catbells, Robinson, High Stile, Whiteless Pike, Grisdale Pike, Hobcarton Crag, Eel Crag, Sail, Causey Pike, Rowling End, finally onto Barrow and a shuffle back to Keswick. No time limit,

It was a route that’d always interested me, and perhaps held a special significance, as the Street family had been visiting and eating in the George Fisher café in Keswick for the previous 3 decades. Some of my earliest memories were based on looking at the hills from the window of the café, so when the route was created (and branded, with the offer of a free Buff on completion) it became too hard to turn down.

My brother Jon has had a relatively recent rejuvenation into the world of fell running, most recently completing the Bob Graham Round last summer, so when he suggested a weekend for us to head up to Keswick and have a go, it was an easy decision – although with trepidation, as he’s a little more trained for this type of adventure than I! I’ll have to suggest a Parkrun next time to even things up.

Having stocked up at Booths with the customary basket of bananas and various sugary snacks, we set off around 9AM with the usual spring in our step, and stomachs slightly too full of breakfast. My brother was keen to follow record holder Brennan Townshend’s GPS trace (but mercifully, not attempt to run at his pace), so we dutifully set off through Portinscale to beat the majority of the public to the summit of Catbells. 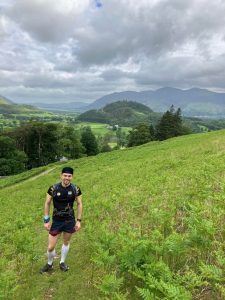 All smiles heading up Catbells

The first observation was that it was windy. Really windy. This was clearly stated on all the mountain forecasts, but it’s so hard to believe that on the valley floor! We swiftly descended to Little Town and reflected on what was to come.

The paths across to Robinson were pleasant (the reverse ‘Bob Graham’ route), the weather calmer, and we were both enjoying ourselves. The summit came quickly enough, and I’d noted that we’d already got through 3,500ft of ascent, which was a nice morale boost. The strength of the wind on the summit soon reminded us to get moving, and we started the long, grassy descent to Buttermere.

Jon is elegant going downhill. Light on his feet, flowing smoothly, a natural. Bloody annoying, to be honest. On the other hand, I have a habit of clunking downhill with a mixture of fear, a history of sprained ankles always in my mind, and jolting my quads as I stutter down the hill. Arriving at the lake, it dawned on me that the descents were going to be my challenge today, as I massaged my sore quads to try and get them to wake up. 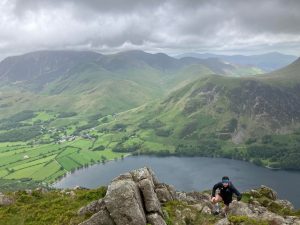 The long slog up to High Stile was therefore a slight reprieve of sorts, before another huge 2,500ft descent back to Buttermere. Jon was continuing to skip ahead and make encouraging noises as I grunted behind, eventually reaching Buttermere itself with complaining legs and for myself, slightly low spirits. I somewhat petulantly demanded a 15 minute break for some food and water at the café, which did the trick of bringing me round, and we set off up Whiteless Pike with purpose.

Jon suffered his own energy dip here, which did give me some relief that I wasn’t going to be the weaker member of the team all day! We reached the runnable Newlands fells in relatively good time, and started the long trip over to Grisedale Pike. This is one of two slightly cruel ‘out and back’ elements of this route, and combined with the ever increasing wind and the general fatigue, started to make things difficult for me. My downhill running was becoming more of a stagger with every passing foot of descent, but we pressed on.

We reached the summit of Eel Crag, which effectively marks the high point – all downhill from there! I continued to make my awkward way down the paths, with Jon fully rejuvenated by this point, as we ticked off the beautiful summits of the Coledale Horseshoe route – Sail, Causey Pike, and Rowling End. The final summit, Barrow, is reached via a final cruel down and up, before the descent back to Portinscale and through to Keswick. 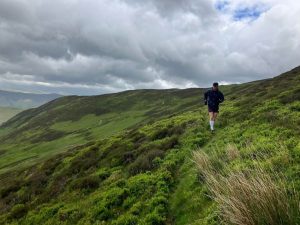 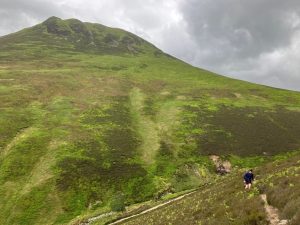 I was a broken man by this point. I stuffed my face with gels and drank all sorts of concoctions – Jon even gave me a good bollocking, but nothing was effective! My legs were shot to pieces, so I was reduced to a 12 minute mile shuffle back through the roads to Keswick. 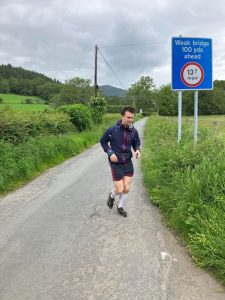 Jon said to me ‘you’ll get an energy boost when we get to Keswick’, to which I replied ‘I bloody doubt it’ (I wasn’t great company by this point), but he was right – there’s something about being around people, and being so close to the end, which pulls something extra from you. Summoning up a blistering 9 minute mile pace, we ran past Moot Hall (to confused onlookers, who applauded, clearly believing this to be a Bob Graham Round finish – I suspect I looked to be the one who’d been out for 62 miles), and onwards to touch the doors of George Fisher in a time of 8 hours and 25 minutes. An incredibly nice woman immediately congratulated us both, took photos, and we stumbled over to The Round in Keswick for the best part of any long run – eating our body weight in burgers, macaroni cheese, and drinking beer.

I’d absolutely recommend the route to anyone – these are some of the finest fells in the Lake District, and George Fisher do a fantastic job supporting the local area and advertising the route. Plus, you get a t-shirt and Buff on completion – what’s not to like!

Jon immediately followed up by asking if I would be attempting the Bob Graham Round. His timing was probably poor. 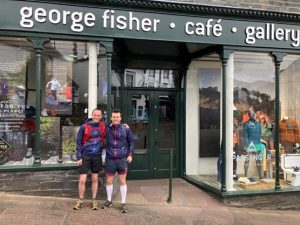 Finished – all smiles once more! 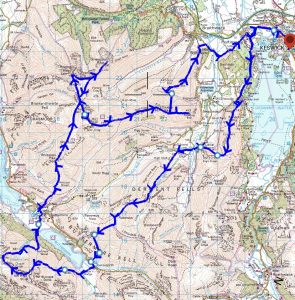