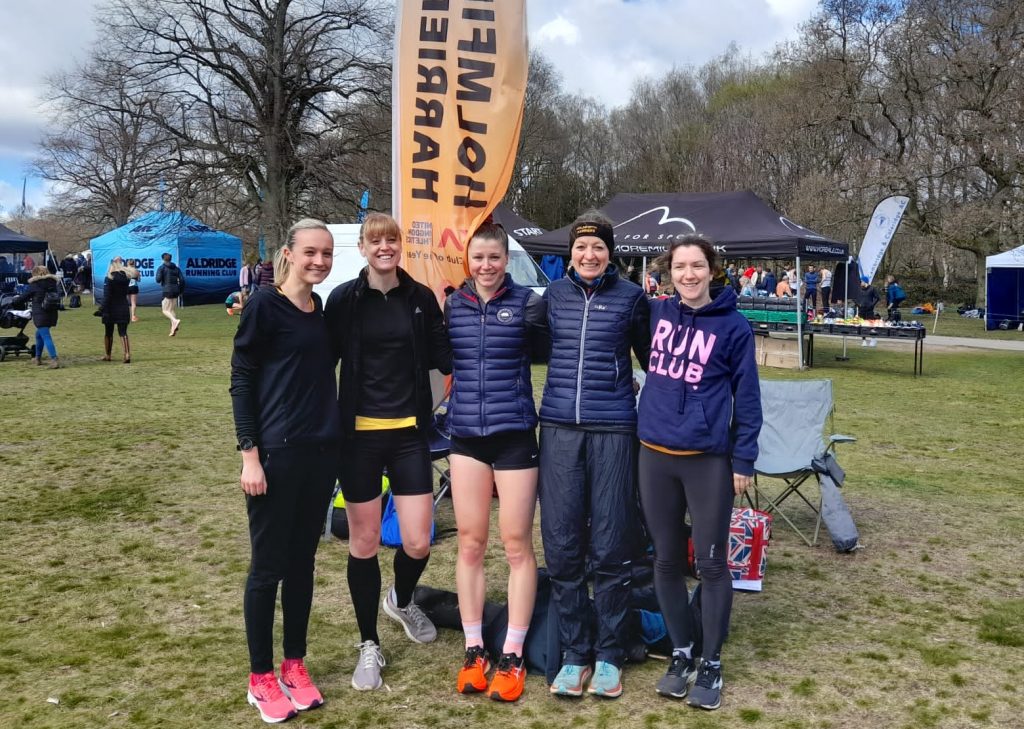 Time for another update regarding what’s been happening on the road in April.

The Salford 10k was the third race in this year’s championship and was held on Friday 15th April. It’s a two-lap course which is both fast and flat, and subsequently it attracted a relatively strong field. There were 438 runners in total; although only one runner dipped below 30 minutes (and interestingly he has only been running for three years and travelled over from Sweden especially), the top 43 (i.e. 10% of the field) were all under 35 mins with the first 126 – just under a third of all runners –  being sub 40.

Ten Harriers made the relatively short journey for the race on what was a pleasant day with favourable running conditions. First back for the club was Phil Hinchliffe in 35:38, whilst the first female was Amy Smith in 44:33. The nature of the course also meant a few personal bests, with Michael Sanderson (38:52), Kevin Dessoy (41:33) and Nicky Ottaway (47:09) all recording their fastest times over the distance. All runners were rewarded with a Crème Egg (or two!) upon finishing, and during the post-race discussions it was interesting to note how many Harriers actually missed the hills!

In terms of the Men’s Championship, Michael Sanderson (52 points) currently leads Phil Hinchliffe (50 points) courtesy of the bonus points acquired from taking part in the Club 6. Only eight points separate the top five however, so there’s plenty of scope for this to change. In the Women’s Championship, Amy Smith has been first back in all three races and subsequently accrued the maximum 75 points; nobody else has competed in more than one race to date. Amy also leads the Age-Graded Championship (58 points), as she has raced in more events than any other member. Kevin Dessoy isn’t far behind however with 53 points from two races, with Rob Kersey one point further back on 52 points. Remember that each runner’s best six races count however, so even if you haven’t competed in a championship race yet there is still time to take part and accrue plenty of points!

The National Road Relays were held at Sutton Park, Birmingham on Saturday 9th April. Unfortunately the men failed to qualify, meaning that we just had one women’s team of six out representing the Club. They performed commendably to finish 22nd overall, despite Helen Haigh having to effectively hobble the last leg due to injury.

A week later saw the Yorkshire Road Relay Championships being held at St Thomas A Becket Catholic Secondary School on Saturday 16th April; the seniors had 16 runners representing the Club as we fielded three men’s teams and one women’s team. The course itself was 4km long and featured four laps around a tarmac cycle track. It was mostly all flat, although there was a short incline after around 200m of each lap. There was absolutely no shelter however, and temperatures of 18˚C made it hard work for the runners.

The men’s ‘A’ team narrowly missed out on a medal by 41 seconds as they finished fifth overall. The women’s team also came fifth, although special mention should go to Isabel Richardson who ran the fastest leg of all women competing on the day (13:46) at just 17 years of age.

These team events really are a fantastic day out and a great way to get to know your teammates a little better. Contrary to popular belief, runners of all abilities can compete, and the Club will also pay your entry fee. We’ve had 31 different members compete in the Yorkshire, Northern, and National Road Relays over the last few weeks, and it would be great to expand that number even more in future.

Elsewhere we had five runners taking part in the Therme Manchester Marathon on Sunday 3rd April. Tim Brook (2:48:33) clocked a PB as he was the first Harrier back, whilst Jamie Wood (2:48:59), Alex Robinson (3:01:35) and Nici O’Dowd (4:07:56) all put in excellent performances in their first outings over the distance.

The Dionne Coburn Memorial Club 5 is being held on Tuesday 17th May. At the time of writing we have 26 members signed up to compete, but that’s a long way short of the 57 that competed in 2019. You can read more about the event and sign up to race on the event page.