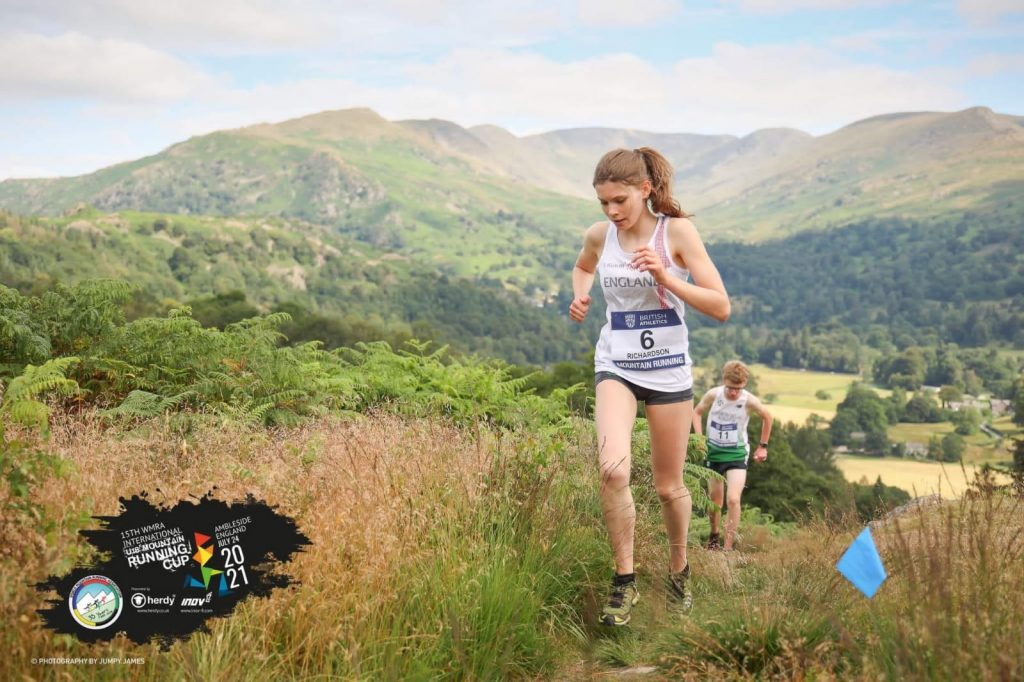 Huddersfield teenager and Holmfirth Harrier Isabel Richardson, 16, made her international debut recently, representing England at mountain running in the International Home Countries Youth Cup. The race was held in Ambleside on a 5km course that included a tough 300m ascent, with England up against strong opposition from Scotland, Wales and Northern Ireland.

The four-strong England female under 18 team was made up entirely of Yorkshire girls, selected by their performance in a trial race. They arrived at an uncharacteristically sunny Lake District the day before the race, where they could recce the course, collect their new kit and have an evening of team bonding. Staying in university accommodation at Ambleside, it was a short walk the next morning to the park where the race would start.

Although COVID-19 forced the race organisers to scrap their original plans of hosting runners from a number of European countries, the recent lifting of restrictions meant it was still possible for a scaled-back version of the event to go ahead. However, the influence of the pandemic was not entirely absent, with all competitors having to run the first stretch of the race wearing face coverings, until they were clear of the park and heading up the hill.

As the trial race for selection to the England team covered the same course a month earlier, the girls were able to make home advantage count in the early part of the race. However, it was Scotland who came out on top, with sisters Isla and Anna Hedley finishing first and third, either side of England’s top-placed runner Eve Whitaker. With three runners to count, it was a nervous wait at the finish line as England’s next two runners, Rebecca Flaherty and Isabel Richardson, finished in fifth and seventh place. Despite England’s fourth runner, Eve’s sister Lexi Whitaker, finishing ahead of Scotland’s third runner, the team scoring system meant that Scotland came away with gold by the narrowest of margins.

Scotland also pipped England to gold in the boys race, by a single point, with Northern Ireland taking bronze and Wales finishing fourth in both races. Racing done, rivalries were left behind on the course, as fell running legend Kenny Stewart handed out the awards and competitors rested their weary legs and tucked into a vegetarian chilli laid on by the hosts.

Isabel, a member of Holmfirth Harriers Athletics Club, first took up fell running at the age of 9 taking part in local races and having gained experience from this, was Year 7 national schools fell running champion two years later.

Prior to races being cancelled due to the pandemic, Isabel became West Yorkshire schools cross country champion (Years 10/11). Throughout the pandemic Isabel remained focused on her training, and with the recent resumption of races she was a member of the gold-medal winning Yorkshire under 19s girls team at the inter-counties fell race in June 2021. Isabel is coached by fellow Holmfirth Harrier and international fell runner Katie Walshaw.

Next race for the England Mountain Running Team is the Junior U20s Home International to be held in Northern Ireland, early September. Good luck everyone.

Racing is only part of the story….