After the 50 mile run last month, I felt another challenge would be a good idea.  Never been to the Lake District before, so a marathon race up and down Scafell Pike should tick the box (and it does!)

Before we get into the race itself, here is the elevation profile to give you some idea. 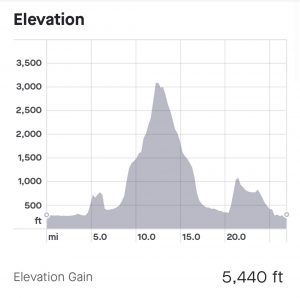 The organisation of the event was fine. I was able to register the day before and they also had a drop bag option. T-shirt and medal were ok.

On the morning of the race it was overcast and was quite warm.

The start is a fair way from the finish. So after dropping off my bag, I would have been about a 30min walk to the start. Fortunately, Jayne (the Boss) was around to help out.

The start was quite comical as we had a single gate to go through after about 30yards.

Around 240 started the race and the first bit was next to the Derwentwater lake.
Nice and flat until about 5miles, so all going well after taking off the waterproof and putting back on.

The first climb was not too bad and we then dropped back down to the stream and onto the checkpoint with the dropped bags. Swapped a couple of bottles and off I set up towards Scafell Pike.

Some of this was runnable at the start and then it was a walk. Nothing like the nice path up to Snowdon and with the rain and mist it was making the rocks pretty slippy.

After a bit of rock climbing and clambering, I reached the top in just under 3hours.

At about 15miles, you were able to run and the pace picked up.

I was feeling good when I got back to the first checkpoint with the dropped bag. Another couple of bottles swapped, bit of food and off I trotted.

Just after 20miles came the hill I was warned about. I soon realized that my legs had done enough uphill, so resorted to a slow walk. It felt like it took forever to reach the top and then it was a struggle to get going again. I persevered and pushed towards the finish line.

I completed the 26.9mile course in 6h 27min and was just in time for the presentations of the winners.

Overall, I was very happy with the run. It was tough going and probably the hardest race I have completed. It was a pity that the cloud and rain didn’t allow me to see the views of the Lake District. Also given the conditions, my feet came away with only a couple of bruises and I didn’t fall over. 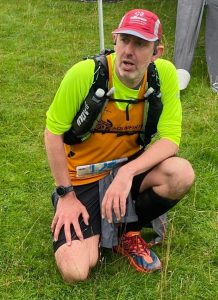