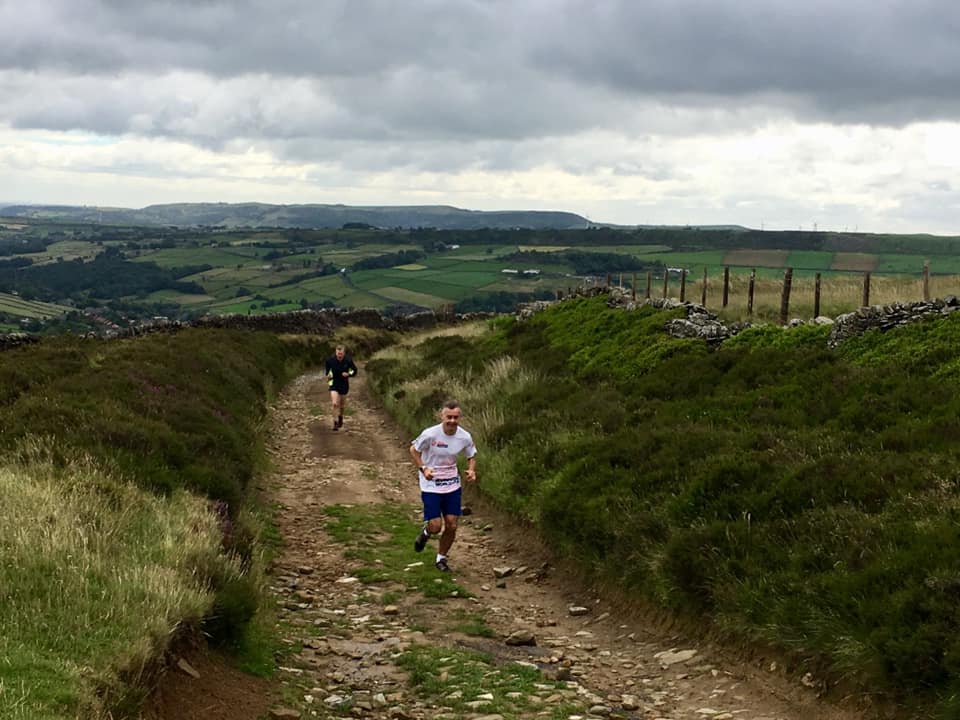 Organised by Rupert Bonnington of https://virtualrunningchamps.com/

There’s no fuss, no medals, no tees, YOU’RE RACING FOR PRIDE. That’s what we were told. Oh yes, and there was a flashing animation with club vests from the fell running teams across the north. Enter your club, and your clubs vest will be added to the animation… that was a good hook. Oh and there’s prizes for category winners and also random spot prizes from our sponsors Inov8, Pete Bland Sports & Mountain Fuel Sports Nutrition.

Plenty of us signed up… but did we realise what we’d entered, and would we have entered if we did? This was the format:

Like a fell champs there is a Short, Medium and a Long.

The first race was fairly easy to find the distance and climb for various club members suggested a range of routes – the Denis Stitt race route, Black Hill, Wessenden valley etc. The trick was to find a route that had enough climb, but do you spread it out over the four miles, or do you prefer an out and back? Hmm.. lots to think about. In the end a popular route was Black Hill starting from Holme Castle which resulted in almost exactly the right amount of climb. Nobody wanted to run extra ascent. We even managed a socially distanced head to head race under covid rule of 6.

Competition was tough with 350 entered across the various clubs, and a fastest time of 23 minutes. Quite a few registered from Holmfirth and in the end 11 submitted results. John Ewart achieved an impressive 2nd in his age category, and Rob Kersey 9th. The team came of in 17th place – not bad against those eye wateringly quick times which some runners posted, and given that some courses were very different under foot.

On to the middle distance event. 8 miles and 1800ft of climb. This was quite a challenge around the Holme Valley, with covid travel restrictions being talked about. Loops were suggested that seemed to be more trail running and possibly have too much tarmac. Should we run Black Hill twice, with some kind of shorter loop? What about the Meltham area? In the end the groups who had been running together for the short distance trained together on a few test routes and then diverged into different groups for the time they submitted. The best way to approach this seemed to be train together first to become familiar with the course and then have a small race, with 2-6 runners setting off handicap distances apart.

John Ewart came up with a particularly punishing route which involved running from Butterley Res up to West Nab, down to Meltham and them back UP West Nab a second time. This achieved the exact amount of climb and some fast downhill running where valuable seconds could be gained. This was certainly where those more experienced on the fells made headway. It also became essential to know the route, with some runners taking wrong turns up on the moorland tracks and missing out on potentially easier and faster paths.

This time 315 runners completed the distance, 8 of them from Holmfirth. The event was won by  James Appleton of Keswick in 52 miles. From our club’s side of things, Michael Sanderson was fastest for Holmfirth with a speedy 1hr 11min. John E WON his age category in an impressive 1hr13 and was delighted with his prizes from Mountain Fuel. ‘The race that keeps on giving’ was his caption on facebook.

Now to the long distance event… how on earth do we find 12 miles with 3000ft climbing around here? Back on to facebook – there was lots of talk of the Crowden Horseshoe route, but it was too rough for fast running and we’d seen from the results before.

In the end it proved complex to plan a route even with various online mapping tools. Jon Burdon, Bob Dickinson and John Ewart decided to go ahead with the previously successful format of racing against each other, after setting off handicap distance apart. The route was to be Hayfield to Edale and back via Kinder Low and Kinder Edge. The route was carefully mapped out and measured up. Running was good but there was no time to recce it first. The tricky part of the route was running back along Kinder Edge. There was swirling mist and of course various small tracks, only one of which took you back to Kinder Low. All three runners made small mistakes at some point, with John’s final one resulting in him heading down a different part of the hill. No matter, just keep running until you get to 12 miles and hope the ascent is right! Jon Burdon and Bob were a bit surprised when John E didn’t turn up at the finish but were impressed when he turned up having run a lap of honour… an extra climb over Jacob’s Ladder was punishment for his slight error in navigation!

John ran 2 hours 19 min putting him comfortable ahead of Jon and Bob who finished in 2h23min. He won his age category yet again despite healthy competition. Well done to everyone who took part. Results are here for the overall event: http://www.timingupnorthresults.co.uk/Results.aspx?CId=16576&RId=6036