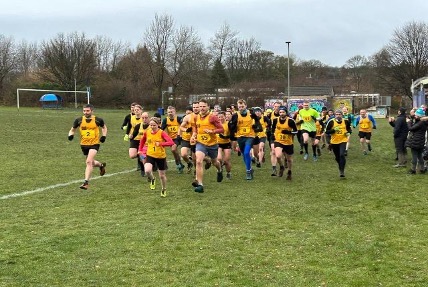 The club staged the 102nd running of the Tinker Cup Handicap, its longest standing race. The race is a sealed handicap which starts and finishes in the recreation ground to the rear of Honley Cricket Club.

We woke in the morning to snow on the tops and icy conditions, but still had 46 dedicated runners line up at 2pm ready to brave the conditions, which had improved slightly from the morning.

Our new Tinker cup winner was Lucy Byram who had a very strong run, Lucy’s winning time after adjusting for the handicap was 56.15 and her actual time was 53.53. Full results are here.

Oliver Glover was first across the line, winning the Ian Roberts trophy in 51.27 as well as being first ‘novice’. The novice category was introduced in 2012 to ensure handicappers have a year to understand the form of new members and participants and this is the first time a novice has won the fastest time, a fantastic achievement given route knowledge is normally thought to be advantageous!

Katie Walshaw was first female back and second overall, recording a time of 51.44 to take the Norman Haigh Trophy. Katie had won this trophy 10 times since 2008, making today her 11th win!

Jamie Wood had another great run coming back 3rd place overall in a time of 52.10 and 15th on the handicap.

The first female Novice back was 17 year old Annie McLean, who was also the youngest competitor of the day and did an amazing time of 59.11. 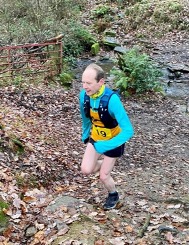 Everyone navigated the ice and brambles and made it home safely, we even gained a new club member Graham Parson 6th novice (72.22) who registered as a member with us on the day so he could take part in the prestigious Tinker cup. Welcome to Holmfirth Harriers, Graham!  A special thank you goes out to all the landowners who kindly grant us permission to run over their land and ensure this race is able to continue every year.

Today was the first time Helena Croft (me!), Ladies club captain, coordinated the Tinker Cup along with a small, fantastic team of Harriers. I want to take the opportunity to again thank Diana Lee, Alexander Hannay, James Spence, Richard Croft, and Roger Bradley who have all worked tirelessly since the end of September, to bring the Tinker Cup together. By the smiles in all the photos everyone seems to have had a fun time, even the ones who took a slight detour.

Thank you to everyone who volunteered or marshalled, and all the donations provided, including O’Briens bottle shop and beer cafe in Holmfirth and Maurten sport who gave us a very generous donation of prizes.

We also had the pleasure of two special awards being presented for 50 years’ membership to Holmfirth Harriers; Andrew Dyson and Ian Moore.  Both presented by Helen Haigh club President and Rob Kersey, Honorary Life Member. Both Andrew and Ian have been members since 1970, but with the race being cancelled in 2020 due to covid, we were unable to make the presentations then. So they have now been members for 52 years! They were both recognised for their contributions to the club; Andrew as Treasurer for a long period including during the Neiley Clubhouse project and Ian for his running achievements and dedication to team events. 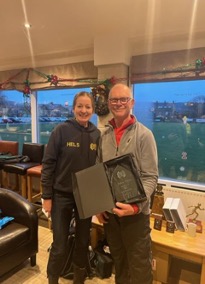 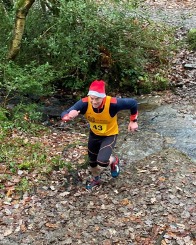