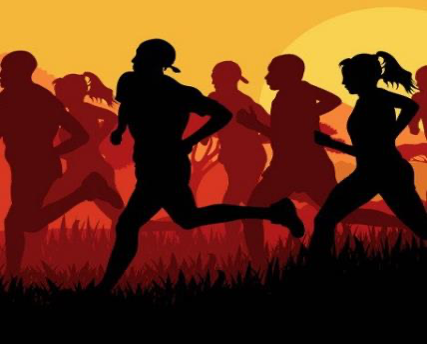 More Rambling from Your President

Not having the usual communications with members of the club during announcement at training nights or indeed at first hand at the moment, I thought that perhaps I should do another ‘Ramblings’ to bring everyone up-to-date with the HH year so far. Looking back at past issues it was 10/11/19 that I did the last one, so almost exactly a year.

Well what a year it has been for club runners generally. The year started in the usual way with plenty of opportunities to race on the road, fells and CC. All the YVAA races were planned and early preparations were started, for what was to be my last year for organising the YVAA, Honley Vets Multi-terrain GP and the Holme Moss Fell Race. In January we all heard mention of a new virus spreading initially in China and then ever outward, with deaths rapidly increasing worldwide. On the 10th March I ran the Thirsk 10 mile road race and the following weekend we went into lockdown.

All competitive running stopped, clubs were closed and club members were only allowed to run on their own. Much misinformation was seen in the press and media about how long you could go out for your ‘one exercise session per day’, some of it not helped by erroneous statements by politicians. In fact we were never restricted on how long we could go out or how far we could run but I’m sure, like me, you may have come up against those who thought we should only be out for 1/2hour or 1 hour and not far from home. Fortunately most of our members would have had access to plenty of off road running where there was little chance of meeting others, although I did come across the odd land owner who did try to discourage me from using footpaths across their land, as if I was leaving a trail of infected earth behind me!

Fortunately the paranoia about runners seemed to ease and later we were allowed to run in groups of 6. This allowed numerous small groups of club members to organise their own social runs and were greatly enjoyed after weeks of solo running.

Next we saw the new phenomena of Virtual Racing spring up. These were sometimes organised by individuals or clubs and free to enter and over a multitude of distances on the road and some on the fells / moors. Next commercial interests and those who had to cancel events got into the act. We saw virtual races appear where you could pay to run in a virtual edition of a cancelled event and so get the medal / T shirt that went with the event. A number of club members took part in both the free and paid versions, and posts on the club Facebook group suggested they did much to keep people interested and gave a purpose to training.

With no club training groups to keep fitness levels high it was all too easy to just take it easy on our lone runs or social groups of 6, I certainly noticed a loss of pace after a few weeks, that I couldn’t just put down to the ageing process! Phil Hanson came to the rescue of his Speed and Stamina group and organised multiple groups of 5 (plus him as coach) to keep the sessions going while the club was closed. Much praise was seen on club Facebook group.

Eventually communication from EA informed us that they were working with government to come up with a way of reopening clubs and restarting racing. To this end a sub-committee was set up to look into making the club Covid-19 secure and prepare for reopening when we got the go ahead. Phil Hanson, chaired this group and did much of the work in getting the RA’s written and getting the building ready. Roger Bradley, as usual, helped with the later and Michael Hall, Tim Cock, John McFadzean and I have also been involved helping where we could and coming to a consensus on the way forward.

After one false start, we were eventually able to open on 8th September. At first we just opened for some groups each night and then on the 15th, the full club. We managed to open for 8 weeks with staggered start times and all the Covid-19 precautions such as masks, temperature checks, one way system in the building and records of who runs in each group (for test and trace purposes) in place. A few minor adjustments were made after the experience of the first couple of weeks and training nights were going very smoothly, with this new system in place. Numbers were not as high as pre-pandemic but we were regularly getting 40 – 60 senior members attending plus around 50 juniors.

Unfortunately, as you will all be aware, all that came to a stop on the 2nd November when I again closed the club for the latest lockdown.

This also meant a postponement of our Covid-19 Club 5 and 10 mile handicaps that had been planned for November and December. However, Jon Burdon has organised a Virtual series of events for club members ranging from 1500m to 10K, some on and some off road, hopefully catering for a large spread of the membership. Details are on the club website and Facebook Group. They are free to enter and you have until the 17th November to Register and till late December (I think) to complete the runs.

For those of you that did not attend the AGM all the documents, Minutes of Meeting, Section Secretaries’ Reports, Treasurer’s Report and Accounts and Trustees Report on work done on the building and car park, will shortly be on the website. Given the situation most officers have continued in post but we do have a new Club Secretary. We welcome Claire Leader to this post and thank her for offering to take up the reins.

We have of course now reopened a second time and let’s hope people are sensible at Christmas and we don’t get another massive spike in infections leading to yet another lockdown, the strain on livelihoods, not to mention health and deaths is already terrible, with vaccination on the horizon we all need to do our utmost to keep everybody as safe as possible by our behaviour.

It would seem unlikely that we are going to be out of this pandemic, to an extent that we can go back to a ‘normal’ way of life, for at least 6 months and possibly a lot longer. Let’s just hope all our members come through this unscathed.

One good piece of news is that the Committee agreed earlier this year that Jon Burdon should be employed to develop a new website for the club. This is almost ready for launch now and may even be live by the time you get this Rambling. Jon has surveyed members to ask what features they would like to see and it is hoped that we can keep this updated more easily, thus making it a better resource. Thanks are also due to Matthew Rose for agreeing to act as the link between Jon and the Committee and using his IT knowledge to deal with day to day questions Jon may have, without constantly referring to the Committee and consequently slowing down the process unnecessarily. I have viewed the website and to me it is a great improvement. The intention is that this should be your first point of call for information about anything to do with club. When you get notification that it has gone live please have a look when you have a few minutes or when you are fed up with the TV over Christmas!

I wish everyone continued good health and look forward in hope of a better 2021 and certainly 2022.