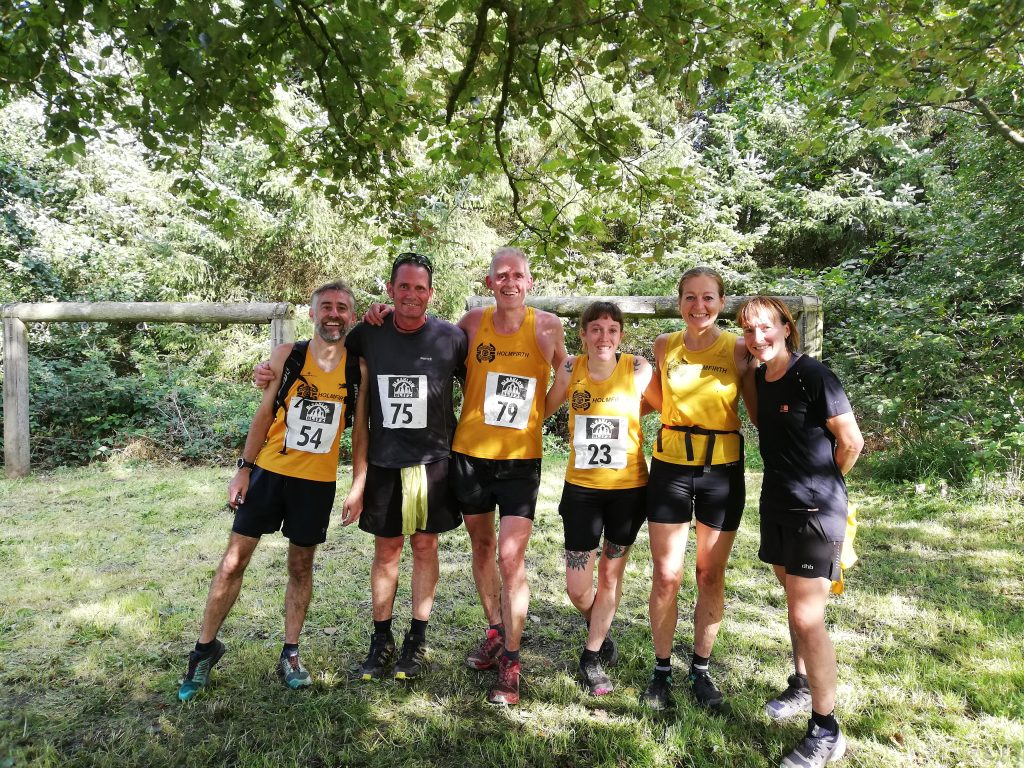 Evening everyone – hope you’re all coping with the first blasts of Autumn?! Time for another Fell Update it seems! Couple of events to report on since last time.

First up for the seniors on Sunday 11th September was the Bleaklow Blitz, in only its 2nd year of running & word had got out, as it was fully subscribed before race day. We had 7 Harriers amongst
the 82 starters heading out from Torside up onto Bleaklow & back again – 8 miles & 1500 feet of climb. First back for the club & first lady wasHelen Haigh, 18th overall in 1.14.41, whilst hot on her heels & stealing a march on his Fell Champs rivals was Adam Sunderland, 21st overall in 1.17.20. New recruit Sally Coldwell was next to finish, 33rd overall & 3rd lady in 1.21.41, with Jim Durrans close behind, 39th overall in 1.25.00. Taking it steady in his first fell race since January, Phil Hobbs finished 56th overall in 1.35.52, just ahead of Sophie Cromwell, loving her fell-racing & finishing 59th overall & 8th lady in 1.38.32. Last but not least, Bill Hunter had an outing & finished 74th in 1.49.33 – long may it continue! Prizes were limited to the 1st man & lady, but we did all get a mug, some sweets & a lollipop! We’d have been the first ladies team had it been awarded!

Last Sunday (2nd October), it was the Hodgson Brothers Mountain Relay up in Patterdale. After initially only being offered one Open team place, we were able to take advantage of another club dropping out & the Vets, who had been on standby, also made their way up the M6 on a lovely sunny morning! As ever, we had changes in the make-up of the squad, right up to the day before, but everyone who ran did themselves proud in what is always a tough day out.  The Open Team of Adam Sunderland, Curtis Firth, Katie Walshaw, Lewis Byram, Gavin Baxter, Helen Haigh, Tim Street & Tim Brook finished 34th overall in 4.43.45, whilst the Vets Team of Barbara Hinchliffe, Debbie Hall, Ian Goulding, Keith Baird, Mark Law, Andy Shelbourne, Jim Durrans & Chris Beadle were 65th in 5.56.29. At the sharp end, Keswick maintained their grip on the Mens trophy, winning for the 5th consecutive year in 3.34.23, whilst for the Ladies, Ambleside managed to hold off last year’s champions Helm Hill in a very close battle, winning by just 2.5 minutes in 4.36.48. Rolling back the years, Borrowdale clinched the Vets Team prize, finishing 11th overall in 4.11.19, whilst Black Combe scooped the Mixed Team competition, finishing 12th overall in 4.11.29 – a new record.

Elsewhere, have seen a few out & about, including Tim Brook at The Yorkshireman (Full), where he was 5th overall & 2nd V40, Curtis Firth at the Skipton Trail Half and then The Lap – 75km round Windermere, where he finished 3rd Man, Keith Baird at Grisedale Horseshoe, Andy Shaw at Shelf Moor & a few at the last Trunce, including Sophie Cromwell, Kevin Yewlett, Barbara Hinchliffe (1st FV60), Tracey Newman & Richard Whale (or Laurel & Hardy as they’re now known)!

With just 2 races to go, it’s very tight at the top of the Fell Champs, with Adam Sunderland, Tim Brook, Keith Baird & Curtis Firth battling it out for the top prize. They’ve all entered the next race, Race You To The Summit, on Saturday 29th, so let’s have a few more there to spice up the competition!

Congratulations once again to Isabel Richardson, who was selected to run for England FU20’s at the Junior Home Countries International on 3rd September, held this year in Ambleside. In a very strong field, Izzy had another good run, finishing 7th & 4th English counter, helping the team to 1st place, so well done to her.

I still need a couple more volunteers for the British/FRA Fell Relays on Saturday 15th October up at Broughton in the Scottish Borders. Minibus & hotel booked for Friday night – club pays, so please let me know ASAP if you can run!

Coming up in October/early November, as well as Race You To The Summit, there are a couple of other local races to have a go at:

Don’t forget to let me know if you can race at the Relays next Saturday!