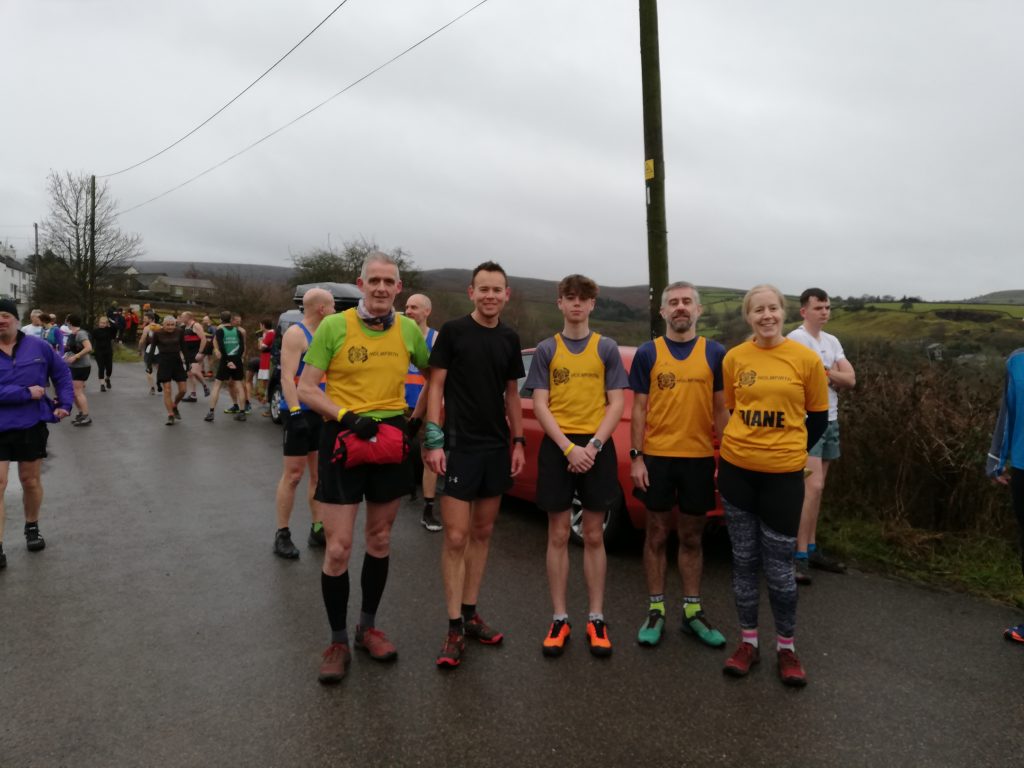 Evening everyone & a Happy New Year. Time for an update to whet your appetite for the year ahead!

So that’s 2022 done & dusted, where we saw pretty much a full return to racing after the previous two Covid-affected years – onwards & upwards for 2023! With the relays & championships all signed off in November, there were just a few races in December to keep people entertained if they fancied an outing & we did spot a few amber vests out there.

A few of us headed over to the Mytholmroyd race on Sunday 4th December, lured by the promise of a can of Vocation ale from the race sponsors for all finishers! It’s a tough 6.2 mile, 1640 foot Medium race, with a very steep start from the valley floor to the top of the moor, down the other side & back again! In a tightly-bunched Holmfirth V50-fest, Jim Durrans was first back, 83rd in 71.13, managing to stay ahead of Phil Hobbs (86th in 71.56) and David Milton (108th in 78.14). David’s better half, Joanna Gurney, running for Lytham St Annes, had a great race, finishing 49th overall & 1st FV50 in 64.23 & it was good to see Mike Prior back racing again after an injury-hit couple of years.

I think the freezing weather put off anyone hoping to complete a Tinker Cup/Stoop double over the weekend of the 17/18th – certainly having seen the photos, it looked pretty treacherous – they had to use the bad-weather route & couldn’t even start in the quarry bottom, as it was covered in ice!

New Year’s Eve saw the final race of the year – a Des Gibbons production at Wormstones over in Glossop. Short & sharp, with around 1350 foot of climb in just under 5 miles, but pretty much all runnable at the front end I imagine! First back & fresh from claiming the Harriers Mens Championship, was Tim Brook, who was taking it steady (apparently) but still finished 10th overall & 1st V40 in 40.14! Next back, in his first race as a 16 year old, was Jack Sunderland, who was eager to hold off the challenge of his dad & comfortably managed to, finishing 24th in 42.20, whilst Adam was a little further back, involved in his own battle with a 6’5” leprechaun & came back 47th in 45.49.  Looking forward to their pints at the Beehive, we then had Phil Hobbs (94th in 53.41) and Diane Lee (136th in 62.03). This is a great race & a good way to blow off the Christmas cobwebs – it’s certainly pretty popular, as there were 164 runners, with a good turnout from many different clubs, including Penistone, Saddleworth, Pennine, Dark Peak & Glossopdale.

The senior & junior calendars for 2023 have been updated to the website (many thanks to the Web Editors, who continue to do a great job)! As ever, we’re trying to get as many Harriers to take part in these races as possible, particularly the English Championship events & once again I’ve tried to mix it up, with local races, evening races & some further afield to choose from. There will also be additional points available for those representing the club at the fell relays & national Championship events.

First up for everyone (seniors & juniors) will be a return to the perennial favourite Stanbury Splash on Sunday 15th, which holds no fears for anyone wanting to try out the fells for the first time!

Pretty quiet elsewhere in January as you’d expect, but there are a couple of other local(ish) races coming up in the next few weeks if you fancy it:-

Hope to see plenty of you over at Stanbury Splash on the 15th!