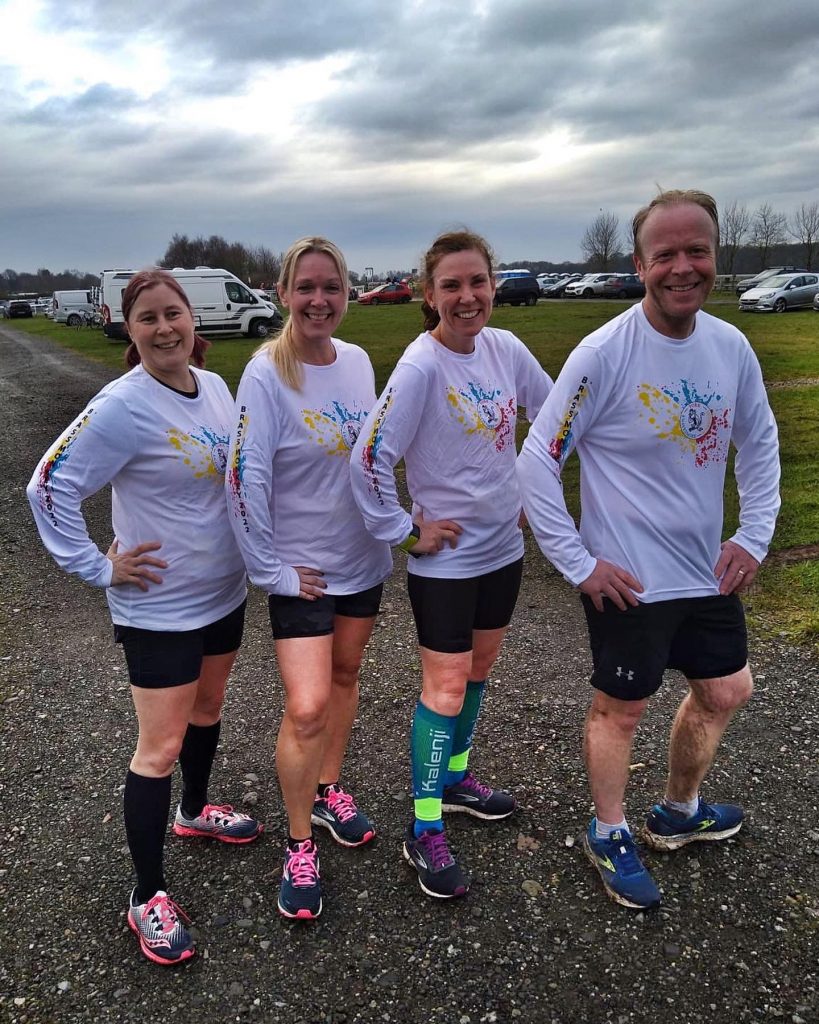 A very popular race, positioned in early January, and for me an important focal point I use to pull me through the winter months.

This year was no different, mid October, entry opened. 1000’s joined the queue and were annoyingly entered into a random position. I was out walking the dog, put myself in the queue and it was a good few hours before I could declare victory and secured a place.  Historically I’ve assisted many harriers and provided an entry service – this year it was disallowed and you were only allowed to secure two places, which I did for a fellow member.

I’d had a very disruptive year, lockdown, injury, weight gain and lack of fitness but on 1st June I decided to pick myself up. I entered the Yorkshire 10, Percy Pud 10k and here the Brass Monkey.

Through Garmin I picked up a Half Marathon training plan and targeted 1:38 for my race in October (bonus it was only 10 miles). That went perfectly to plan and I completed the race in 1:15:43 (7:31mi/ml and equal to 1:38:42). Straight off that I used the same plan and targeted 1:36. I followed the plan and put a few parkruns in, slowly I started to improve from 24 minute 5ks to 21:58. I was on track but the speed sessions were sometimes brutal, nonetheless I did them!

I’d lost touch with many in the club but was keen to avoid travelling alone. There’s something good about sharing the pre-race nerves, plans and having a good catch-up that  makes the day better than the race itself. I put a call on Facebook and was pleased to be offered a couple of seats, I took the first offer which was to join the Lockdown Linda’s!

Unfortunately, Covid had created challenges; Alice had just recovered and come out of isolation and took the difficult decision not to race, and with days to go, Naomi fell victim scuppering her race too.

Race day, 16th January – the weather was pleasant with no rain forecast for York where the race is held.  Alison Smith (and mum), Debbie Beck, Heidi and I travelled over arriving at the Racecourse just after 8:30am.  In contrast to previous years, the main HQ was not accessible and as much as possible we had to cater for our own needs, change in the car, portaloos – some leaving lasting memories –  and race prep.

The race started at 10am, and heading into the race it was very well organised, with highly visible pace makers, enthused and excited runners and good weather!

I describe the race route as a lollipop –  with the first couple and last couple of miles to include the only real climbs on the course; the rest is slightly undulating but very runnable making it ideal for very fast times!

Whilst nervous, to achieve my goal time I needed to run around 7:18 pace and whilst tempted to go harder, stuck to my plan(sage advice previously given to me by Mike Pennington heading into a marathon) .  The first half was quite conversational and it was nice to establish myself in a group and support those around me targetting 1:40. I knew I was running consistent mile splits and with that confident that subject to something going wrong, I’d finish between 1:36 and 1:38.

Water was provided in paper and plastic cups and I opted to have a drink at each. If anything I’d say the last one made my stomach a little unsettled which possibly affected my final miles!

Our group was splitting up as we heading into the second half of the race. The annoyance of those carbon sprung Nike trainers were worse than my memories of Tim Cock “groaning”! There were loads of folk wearing them – not me; after injury earlier in the year, I’d returned to my faithful Brooks.

Over the next 30 minutes all the Harriers came in and I had the pleasure of providing some verbal encouragement and support to the team.  We were all pleased with our performances, having achieved our personal goals and all optimistic for the road ahead.

Catching up afterwards, it was great to learn that Helena Croft had a fabulous run, her first since 2016 and a massive PB, a London championship qualifier and very respectful time of 1:24:31.

The results for the harriers were as follows:

The Brass Monkey (aka Matthew Rose) 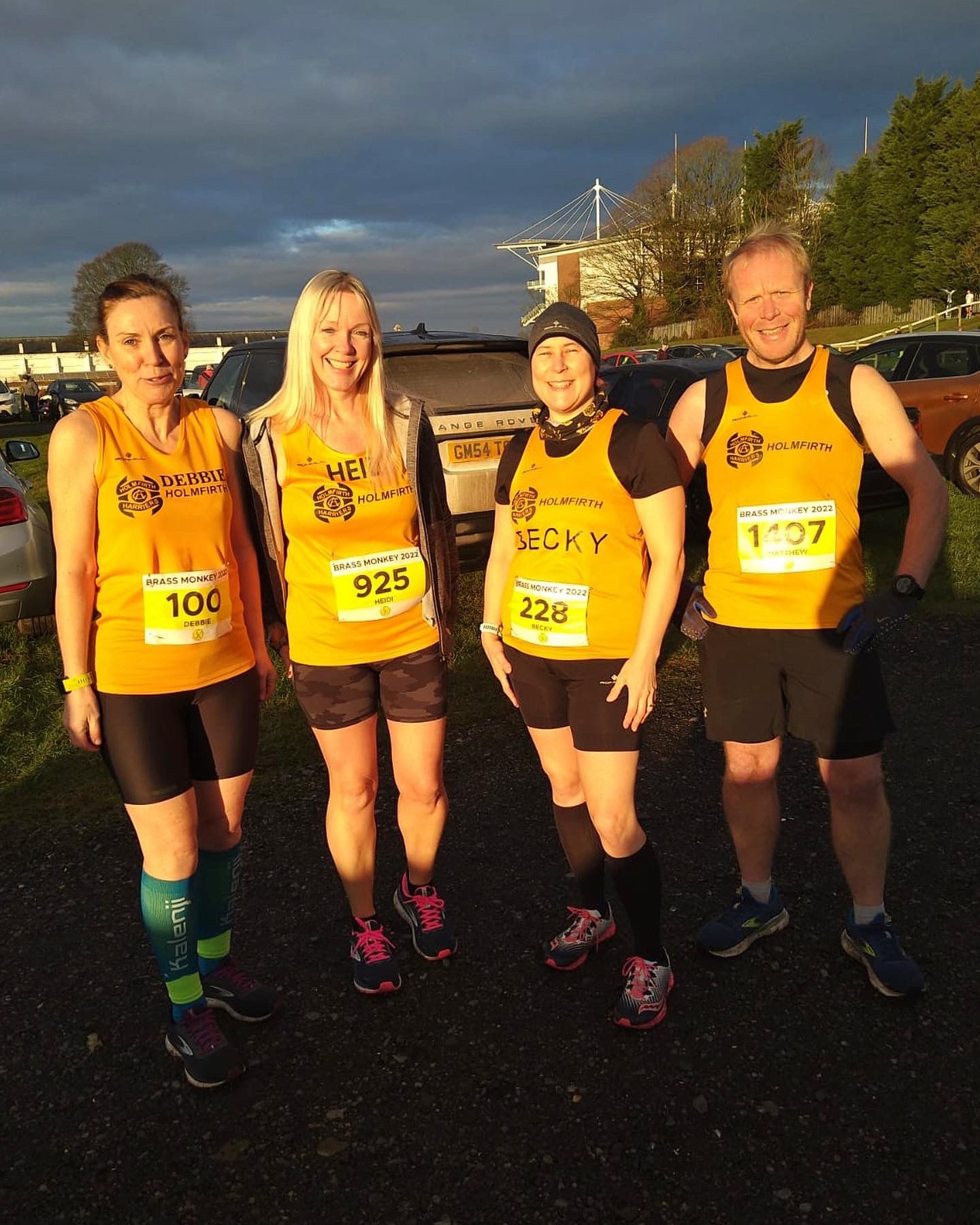 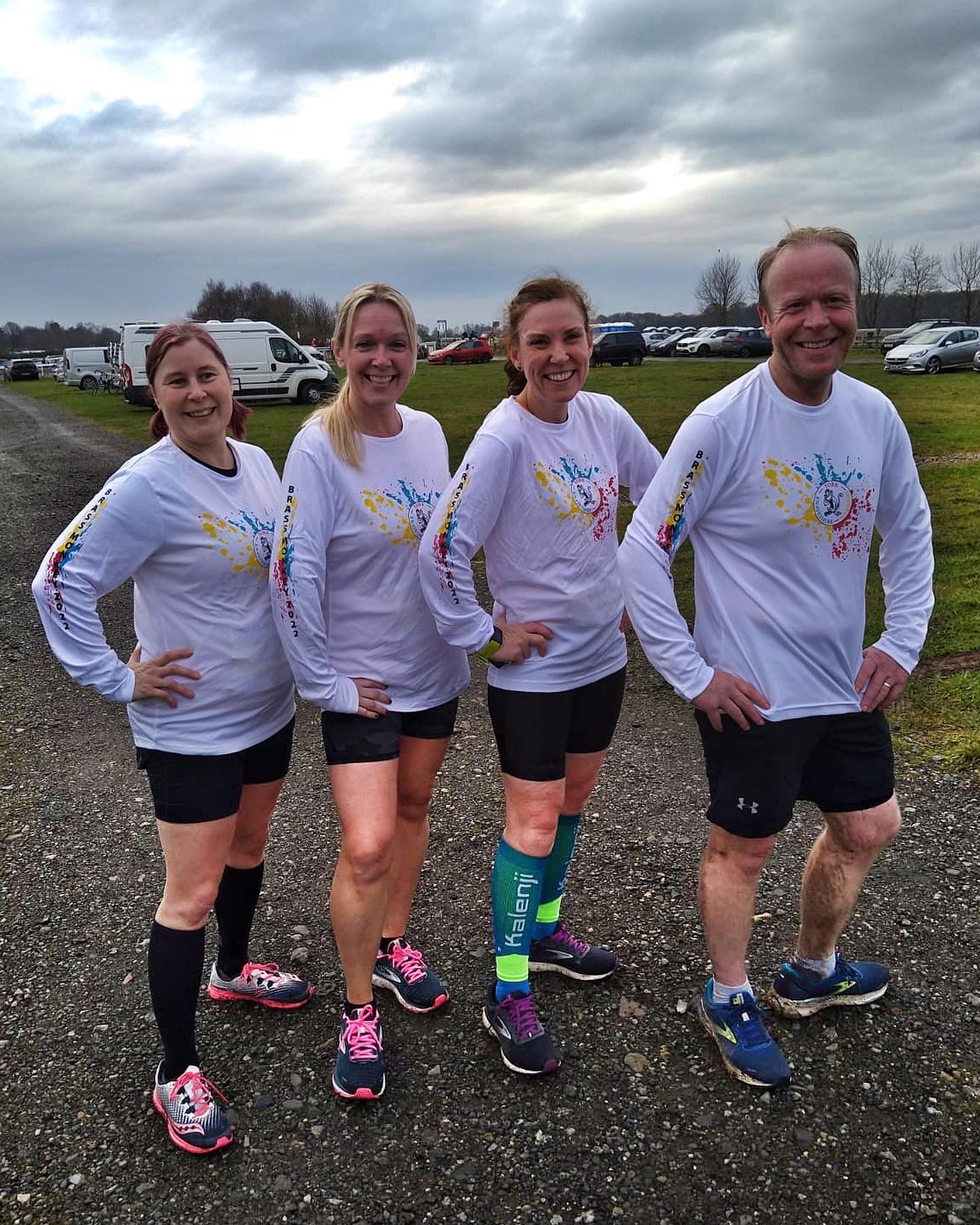 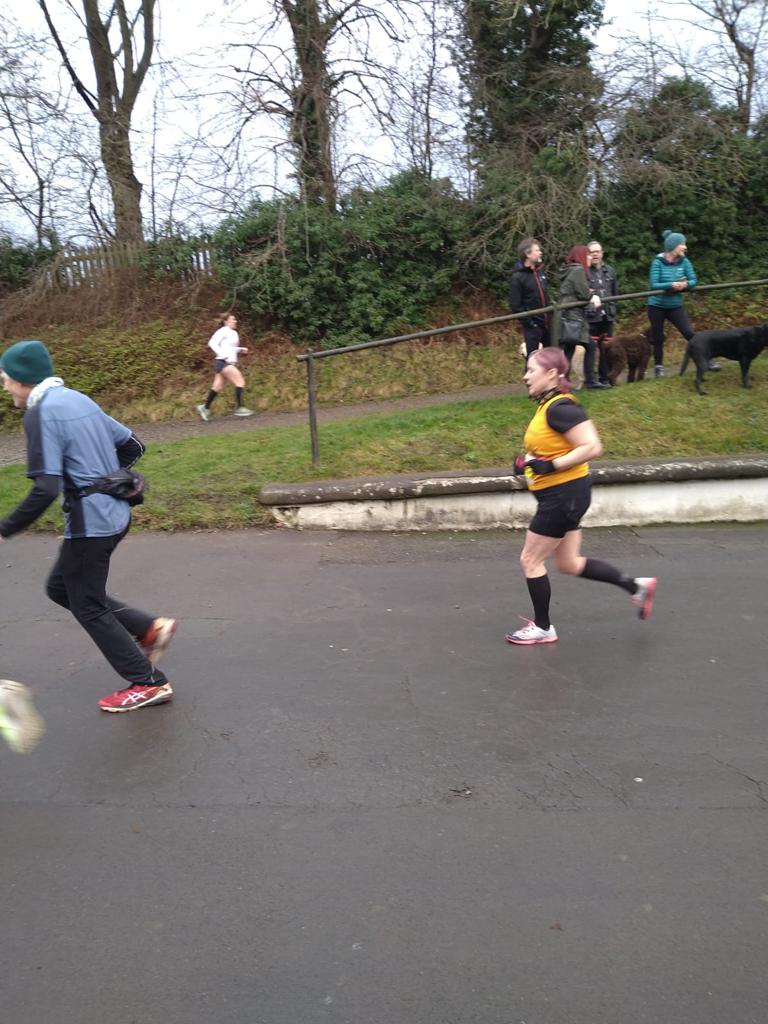 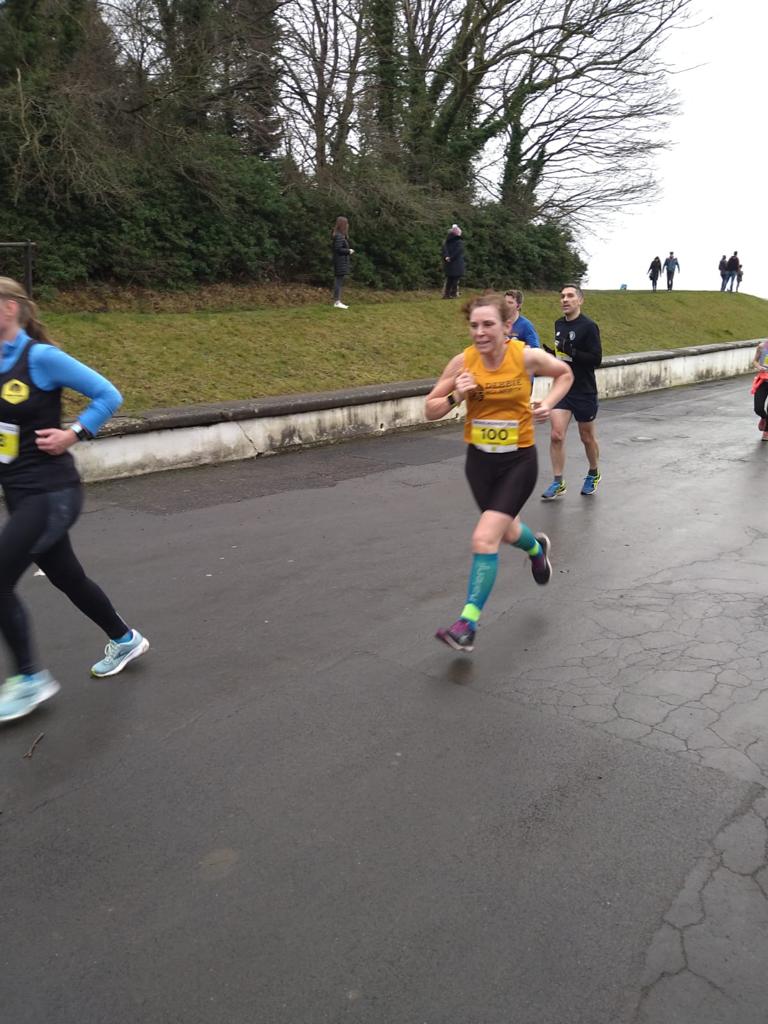 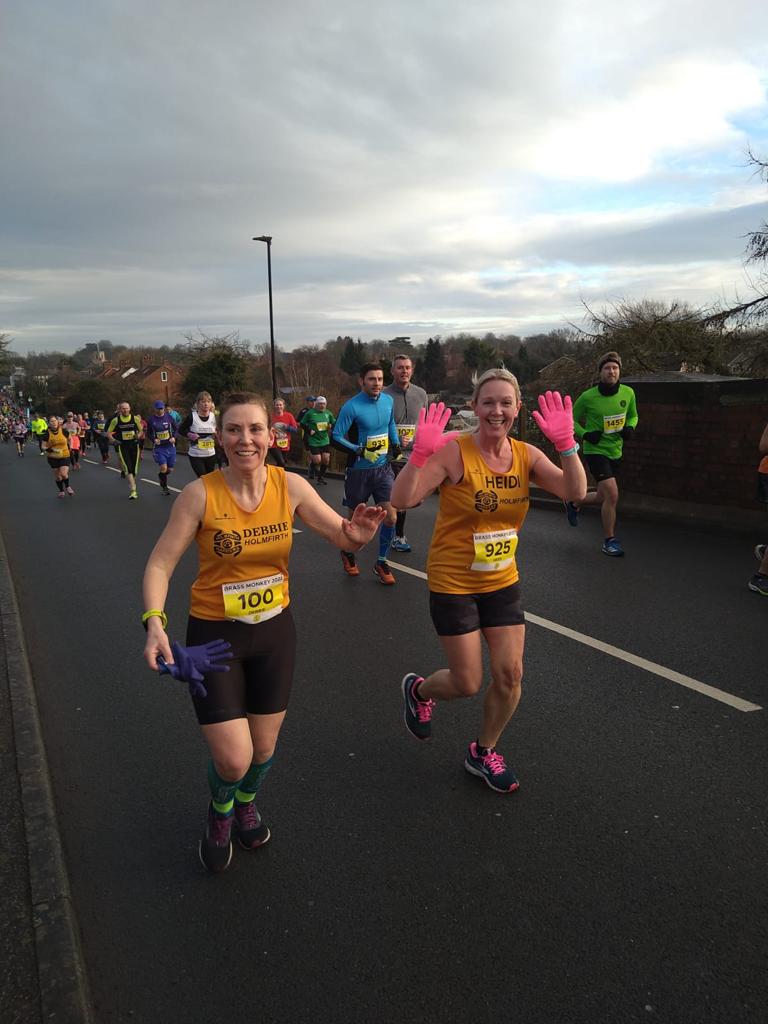 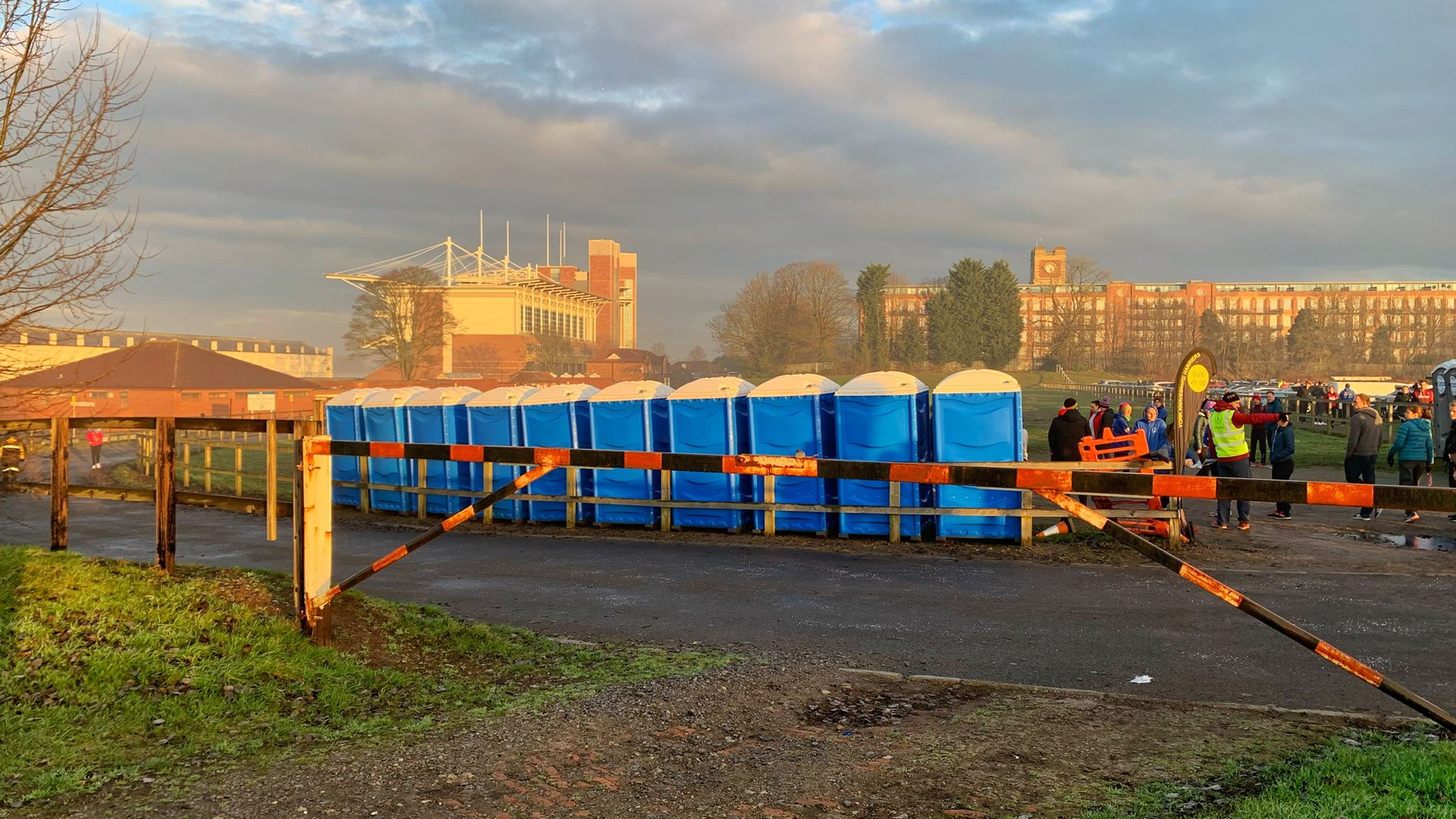 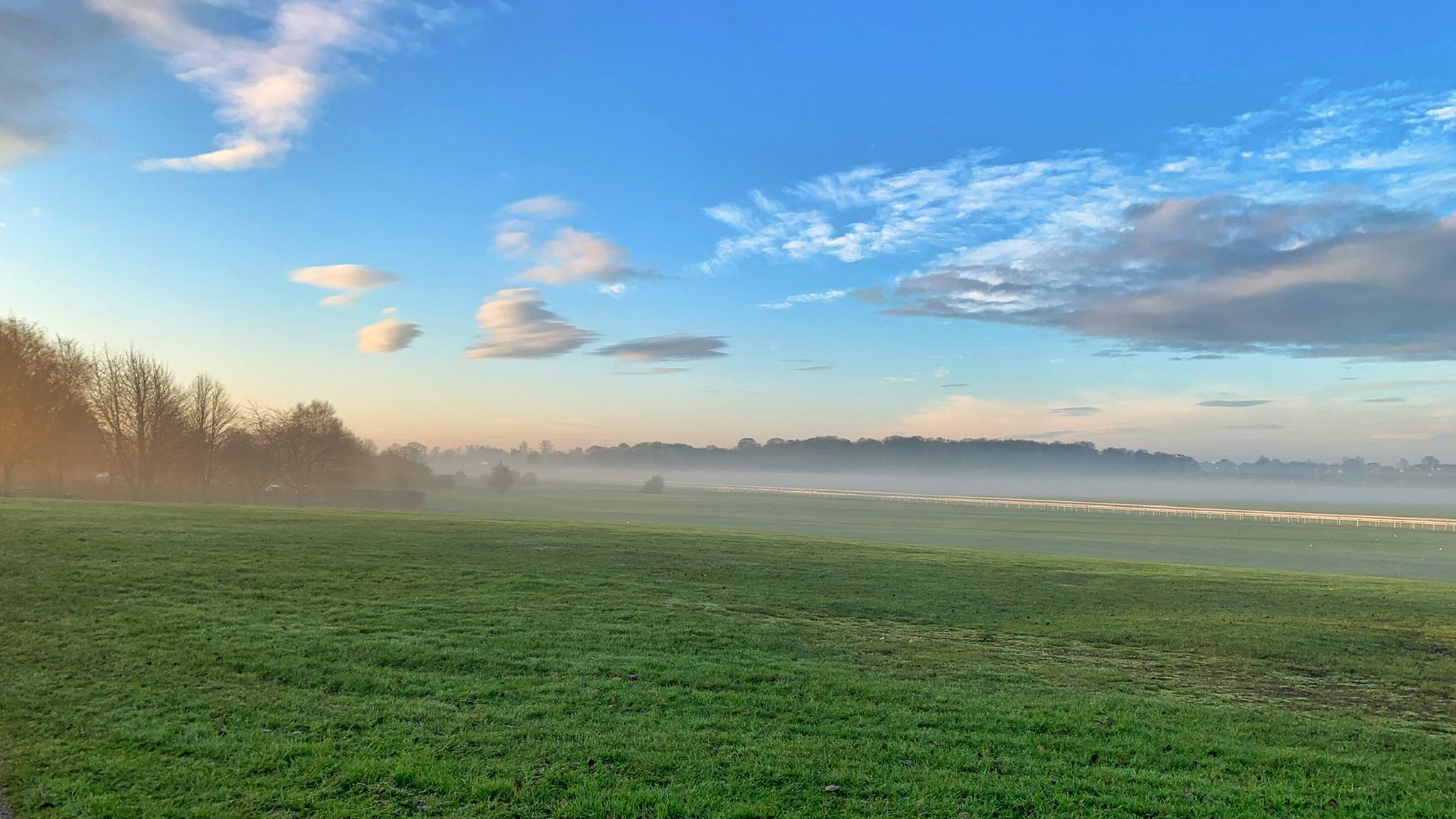 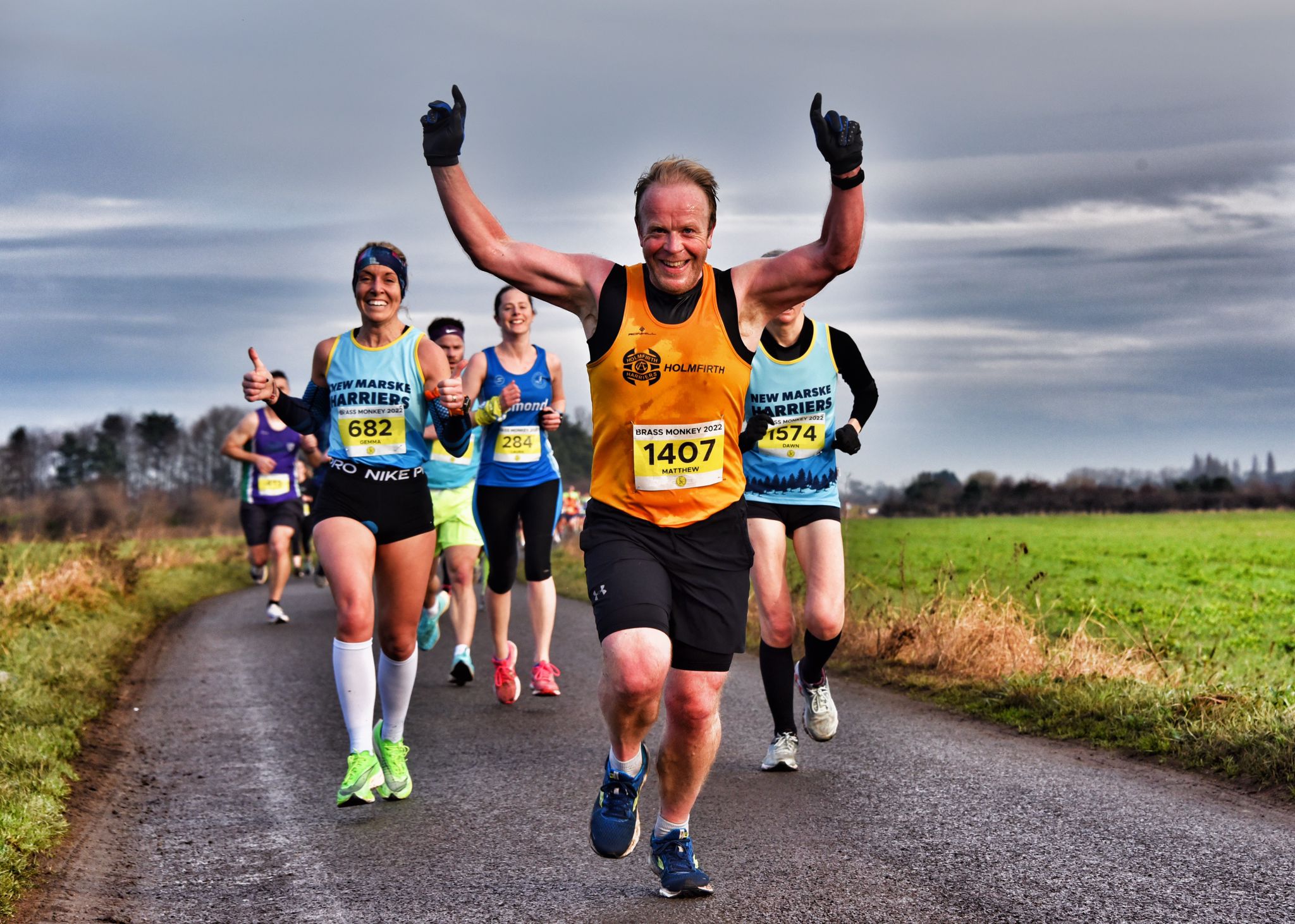 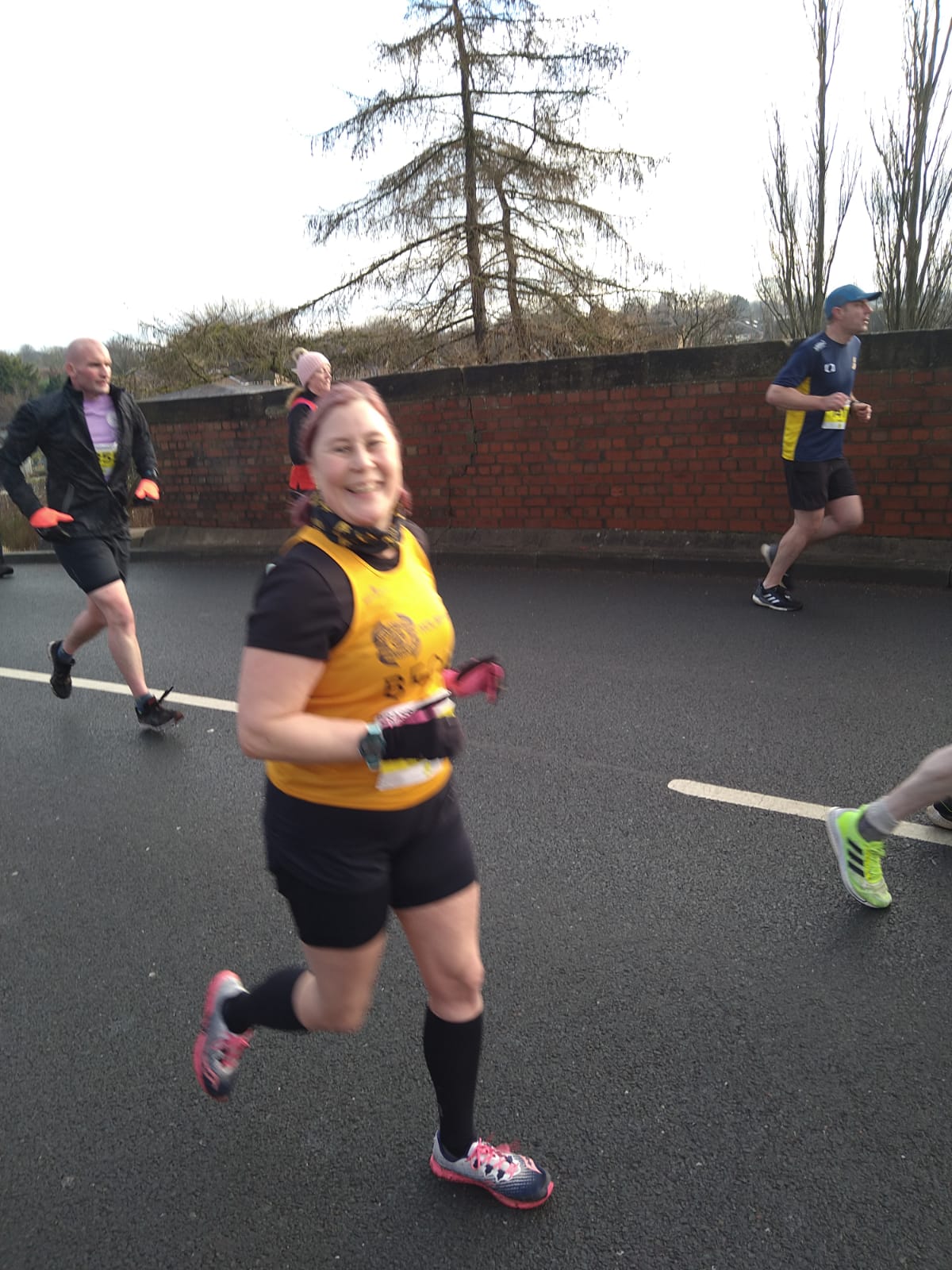 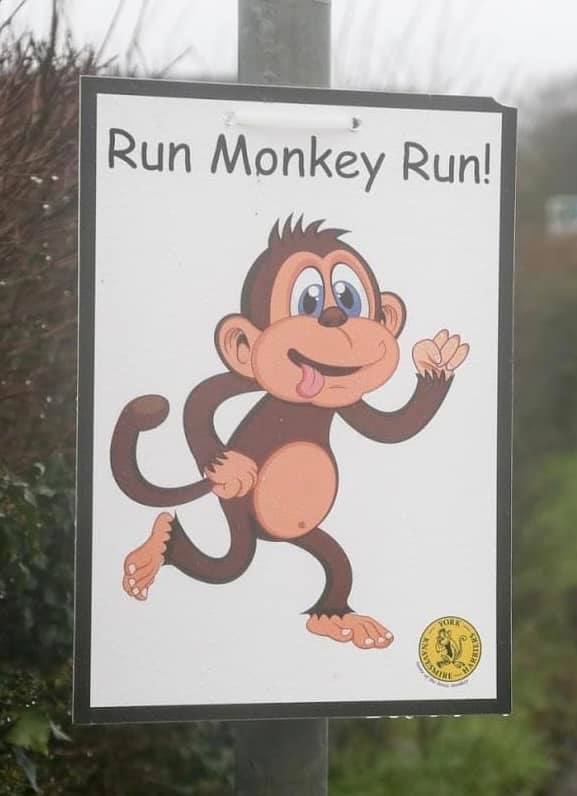 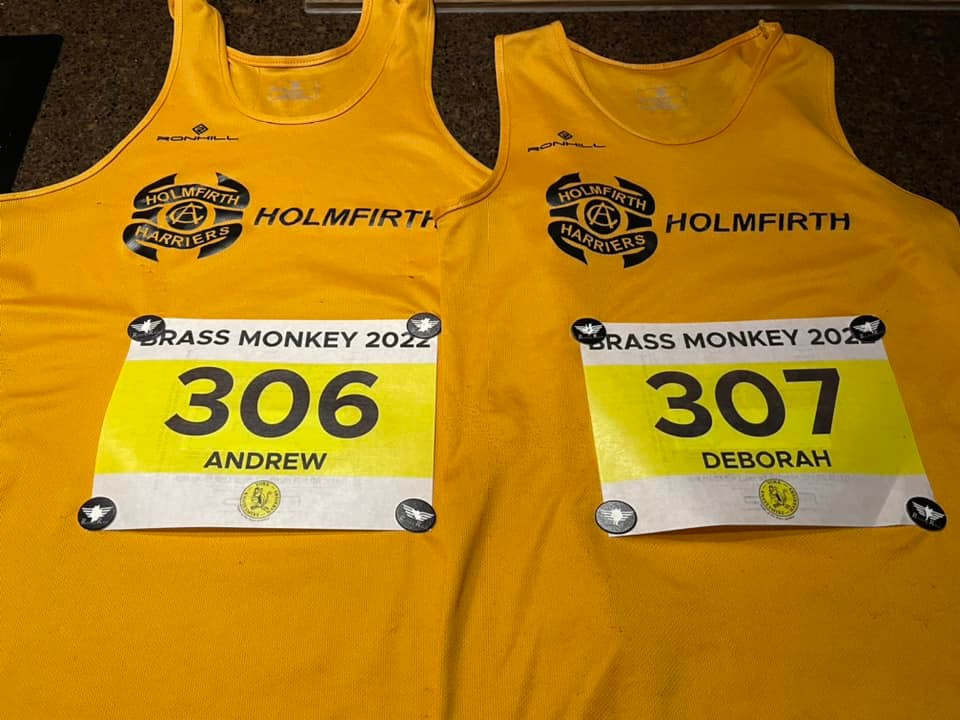 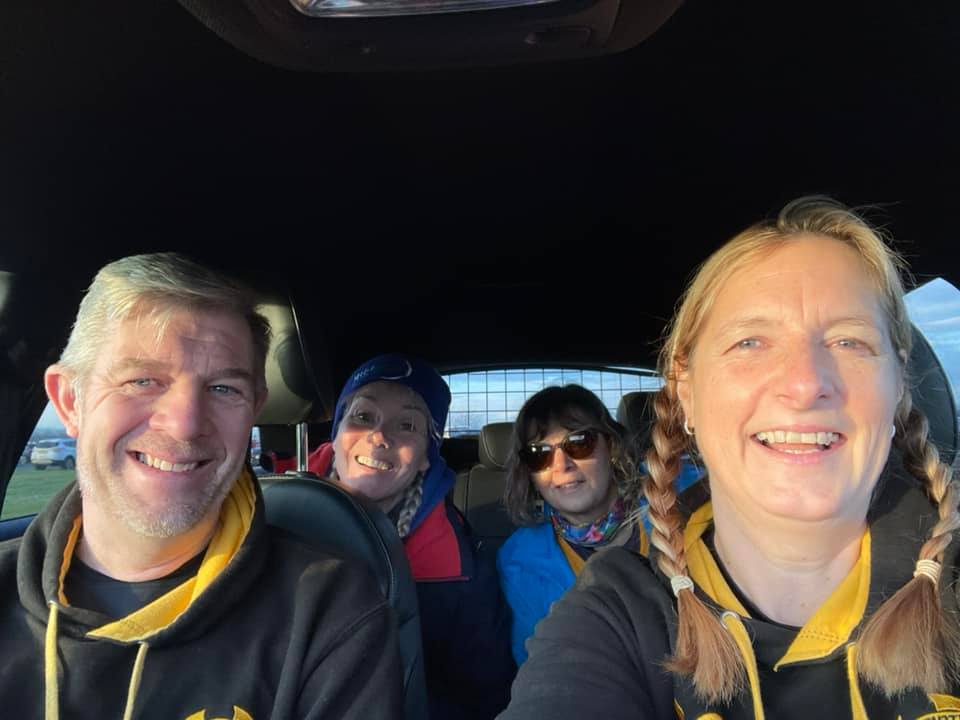 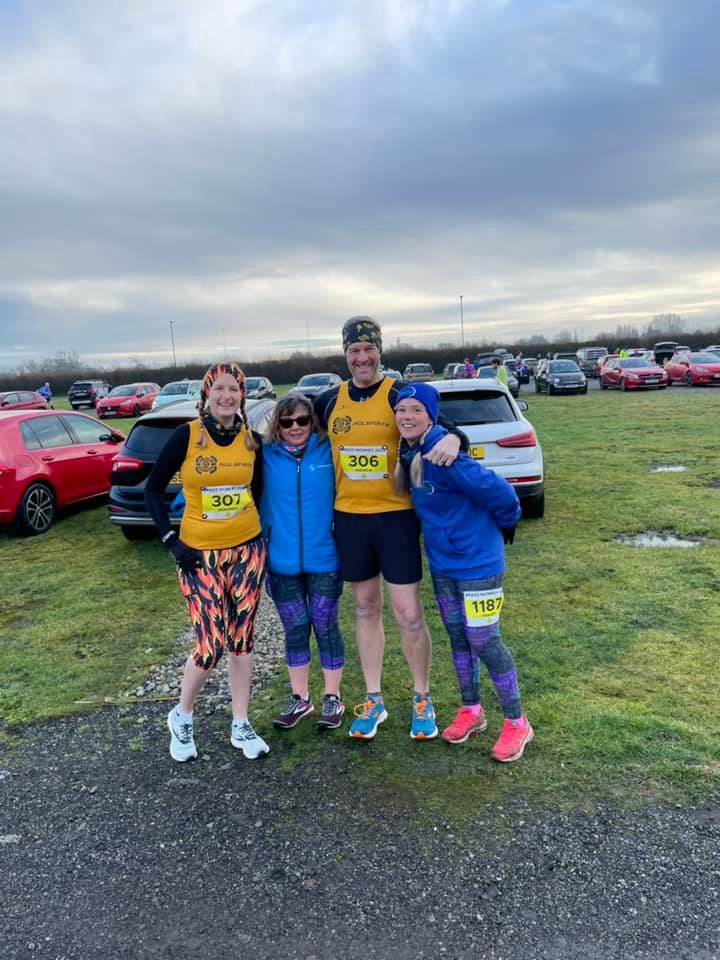 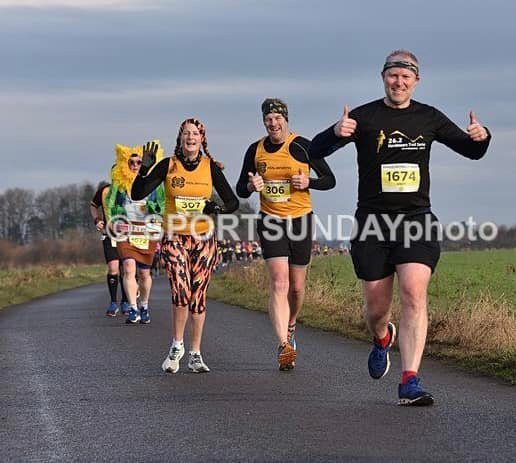 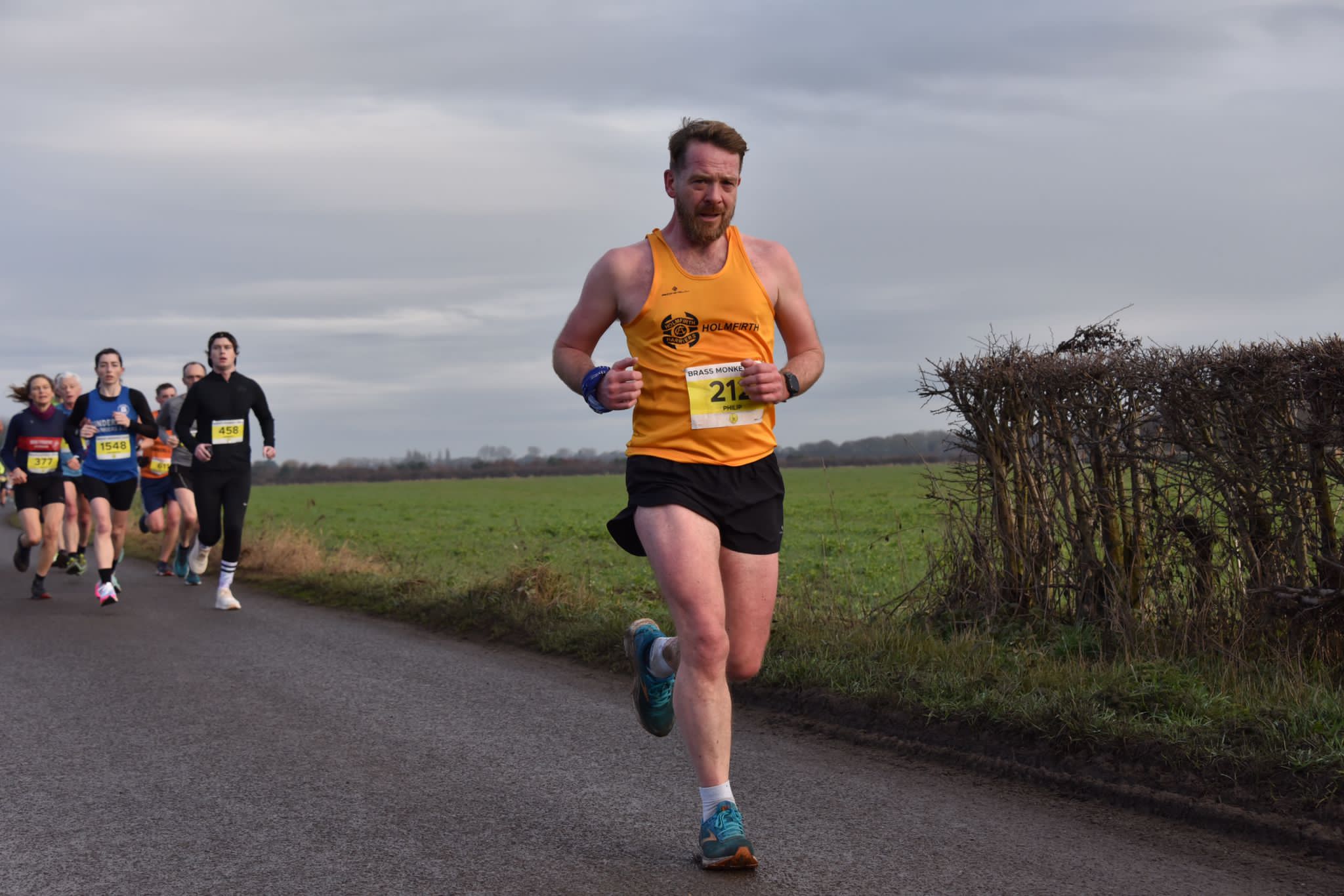