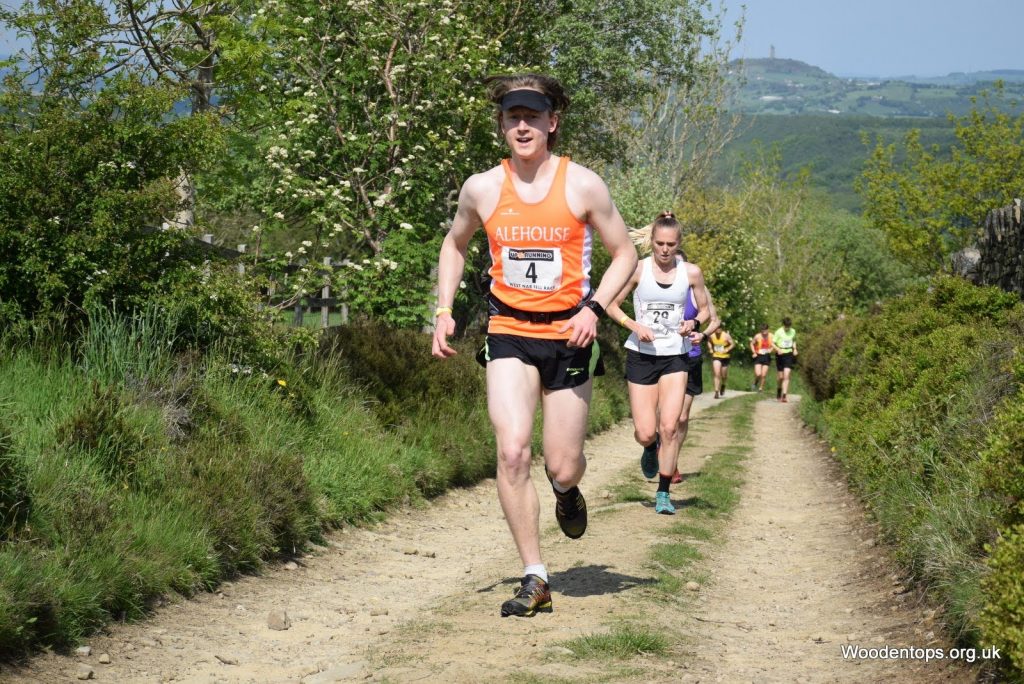 After the disappointment of seeing pretty much the whole of last year’s race programme cancelled due to the pandemic, it was with a mixture of trepidation & relief that we were able to host the first of this year’s English Junior FRA Championship races. After a great deal of planning, made more onerous as we had to ensure the event complied with the ever-changing Covid regulations, we were thankful when the rain finally stopped and the sun shone on the many competitors from across the country who made their way to Meltham. As if to emphasise the crazy nature of the times we’re currently living in, the only kit requirements on the day were for a waterproof top, hand sanitiser & face-covering! But it was great to see so many there, all eagerly looking forward to renewing rivalries & friendships that had been put on hold for over a year. From the 500 pre-entered, on the day we had nearly 300 runners in the junior races & over 100 in the senior race, which was fantastic to see.

We re-designed most of the courses this time, to try & alleviate any early bunching on the narrow paths on Royd Edge, so other than the U9’s, all the races went straight up the bridle-path to the gate above Sun Royd Farm, which was a steady slog in the increasing temperatures over the course of the afternoon. However, first away were the U9’s, whose short & sharp 5 minute blast went alongside the stream before heading up and back into the finish field. The U11’s had to run to the far end of Royd Edge, conquer a short & steep descent, before negotiating the heather and bilberry bushes in making their way back along the track. In a very competitive age-group, Harry Cliff from Calder Valley took the boy’s honours, ahead of Ambleside’s Joseph Green & Rossendale’s Charlie Dobson. For the girls, the Rob Jebb/Sharon Taylor pedigree came to the fore, with Helm Hill’s Isla Jebb just pipping Bingley’s Marcie Ford in a photo-finish, followed in by Annabel Hinds of Settle Harriers. Top Harrier in the 37 finishers was Henry McFarlane, in an excellent 12th overall, backed up by sister Annabelle in 21st (8th girl) and Ruby Baxter in 24th (10th girl).

The U13’s ran a similar route to the U11’s, but with an added loop through the quarry above Sun Royd Farm & because of the numbers involved, we had to split the boys & girls races. Although the first 2 boys took a wrong turn, they were so far ahead of the remainder of the field that it wouldn’t have affected the overall result, so we decided simply to add some time to their finish time, rather than disqualifying them. As such, Joshua Hatton from Wirral AC managed to stay ahead of Daniel Campbell from City of York, with Chorley’s Henry Ward back in 3rd place. For the girls, Calder Valley’s Clara McKee carried on where she left off in 2019 & comprehensively beat everyone in her age-group (including most of the boys), posting a time of 14.13 for the 2.8k, 130m race, ahead of Estelle Lowe from Westbury Harriers & Helm Hill’s Millie Jebb. Harvey Baxter was the highest placed Holmfirth athlete, finishing 23rd overall in the boys’ race with a time of 17.09.

Like the U13’s, we had to split the U15’s boys & girls for their 4.7k, 220m race, as we had over 50 boys and 30 girls taking part. The athletes encountered a bigger loop above Sun Royd, crossed the beck in Royd Edge Clough on a couple of occasions before returning via a steep climb up Royd Edge and a fast downhill sprint back down the bridle-path to the start/finish field. Jack Sanderson from Settle Harriers comfortably won the race in a time of 19.35, nearly a minute ahead of Jacob Reeday of Wharfedale Harriers (2nd in 20.28) & Charlie Pickens of Calder Valley (3rd in 20.30). For the girls, Maisey Bellwood from Keighley & Craven also had a convincing win, finishing in 22.31, ahead of Graihagh Turner of Penistone (2nd in 23.11) & Meg Hoshiko of Wirral AC (3rd in 23.25 in what was her first ever fell race)! Top Harrier was Declan Levay, 16th overall in the boys’ race, with a time of 22.52, followed by Harry Gilligan in 31st and Alexander Gilligan in 50th.

The U17’s were also split into boys & girls for their 6.1k, 335m race, which took the athletes right up to the Wessenden Head Road, before returning to loop round Sun Royd Farm, down across the stream and another loop round the old Royd ruin, back across the stream and the stiff climb up Royd Edge, followed by the fast descent down the bridle path to the finish. Charlie Allmond from Ambleside took it all in his stride, winning comfortably in 27.54, ahead of Chorley’s Jacob Deacon (2nd in 28.45) and his team-mate from Ambleside (& one half of the Bowen twins) Harry Bowen (3rd in 29.09). For the girls, there was another convincing winner, with Amelie Lane of Wharfedale coming back in 30.06, well ahead of Jess Bailey from Leven Valley (2nd in 30.57) & Eve Whitaker of Harrogate Harriers (3rd in 32.26). Best placed for Holmfirth was Joe Minchella, finishing an excellent 10th in 30.58, which earned him a call-up for the Yorkshire team at the forthcoming Inter-Counties race, so many congratulations to him. Annie McLean also had a great run, also finishing 10th in an excellent 36.06, ahead of Jack Sunderland, who is right at the bottom end of this age-group, so it was a big step-up for him and he ran well to finish 23rd in 36.27.

Finally, it was the turn of the Seniors & U19’s, who headed all the way out to the summit of West Nab before turning back to follow the same route as the U17’s as part of the 8.1k, 520m race. The U19’s had a race to themselves, setting off some 10 minutes before the 1st of 3 waves of seniors and as you might expect, posted the fastest times of the day. First back, in a stunning time of 37.05, was Toby Middleton of Horwich RMI, holding off the challenge of Tom Spencer (2nd in 37.19) and Edward Corden from Stockport Harriers (3rd in 37.32). For the girls, Lexi Whitaker from Harrogate Harriers carried on her good form from 2019 to win in 46.53, just pipping Lucy Bednall of Buxton AC (2nd in 47.18) and Ambleside’s Chloe Rylance (3rd in 50.40). Our very own Isabel Richardson also had a great race, finishing 4th girl in 52.12, which earned her a Yorkshire call-up for the Inter-Counties, so well done to her!

Because of the numbers involved (over 100 runners), the seniors & U23’s set off in 3 waves, which made it more of a time trial and meant that the first runner back wasn’t necessarily the fastest! Once everyone had finished (including the ‘V70 legend’ Antonio Cardinale), we were able to sort out the final placings and it was Huddersfield runner Owen Beilby, representing Wharfedale Harriers who posted the fastest time, coming back in 38.30, ahead of Bowland’s Oliver Heaton (2nd man in 38.45) and Honley local Tom Kaye (3rd man in 41.22). The U23’s also had a good battle, with Middlesbrough’s Ben Bergstrand first back in 38.58, keeping ahead of Sam Soles of Buxton in 39.33. For the ladies, it was our own Katie Walshaw who triumphed on the day, finishing 8th overall in 42.42, ahead of Emma Clayton (2nd lady in 43.39) and Fay Walsh of Ilkley Harriers (3rd lady in 51.44). Finty Royle from Chorley had the FU23 category to herself, but still produced a great time to finish 27th overall in 47.21.

With many Harriers helping throughout the day, we didn’t have as many competing as usual, but there were still 10 amber vests out there. In winning the Ladies race, Katie took the honour of being the first Harrier home, but there were also some other decent performances, with Lucy Farquhar 6th lady, Andy Shaw 5th V50 & Barbara Hinchliffe 2nd FV60, so well done to them.

There are so many people who helped us stage the event, so many thanks to the landowners, to Meltham CE Primary School & the Carlile Institute, to the FRA Committee (particularly the Junior & Covid Co-ordinators), to Kirklees SAG and the residents of Meltham, to Pete Bland Sports for sponsoring the junior races, to Up & Running (Sheffield) for sponsoring the senior race and to the many Holmfirth Harriers who helped before, during and after the day. But mainly a big thank you to everyone who competed – you all understood the challenging nature of holding the event in these crazy times and did everything that was asked of you, without any grumbles or groans. Here’s to a return to normality in 2022!