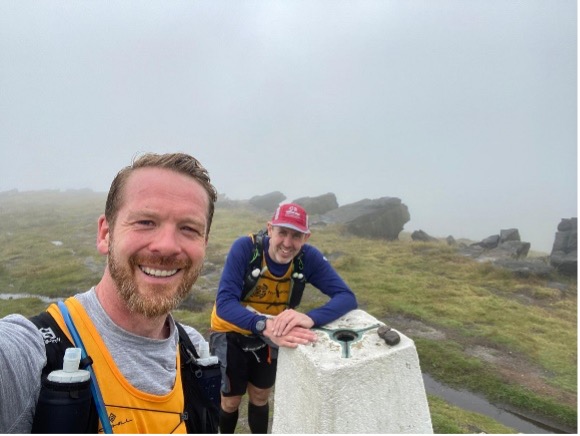 First attempt at such a long distance and joined by Clark Hind and Philip Brown.

Organisation of the inaugural event, after being cancelled last year, seemed to go well and I arrived extra early to get the very heavy bag checked for the mandatory kit. Plenty of runners looking forward to the challenge ahead.

The number entered was 68 and I think most started, with 46 finishing.

The elevation for the race was over 7,000ft and just over 50 miles.

My race was in 3 parts, where I was good, not so good and then awesome.

At the start we all started together, although that would be the last I would see of Clark.
It was raining and the decision was waterproof on or not. Quite warm, but put is on. After a mile, most were taking it off, but decided to stick with it.

The weather the entire day was ok. Rain in the morning and then clearer in the afternoon (thankfully not like the last weekend)

Ran together with Philip for the first 8miles and then on my own. Passed the first checkpoint in Holme village at mile 9 with no issues and onto Hade Edge.

From Hade Edge up and over to Holme Moss and Black Hill which were boggy and energy sapping. An eventful part was the rope crossing due to the torrent of water.

Change of wet clothes just before the 2nd checkpoint (20½ miles) and saw Jonny McLean and Michael Sanderson who were running the 50Km and started 1 hour after us!

Also, Philip caught me up and we tagged along for about 8 miles into the top end of Marsden (Even had a selfie!) until I was starting to slow down to a walk and Philip carried on running. Runners starting to pass me and my first really thought that I would not be able to finish.

A family support crew awaited at mile 33. Really needed this and after drinking all the electrolyte drink and taking on more food, set off.

By the time I saw them again at 35½, I was feeling better and starting to run again.
I am now feeling that I am going to finish and caught my first runner.

3rd checkpoint was at 38 miles. I had caught 2 more runners and I had some warm rice pudding and that was superb. I had been having cold pizza and malt loaf until that point from my backpack.

Another runner passed before meeting up with the family at 46½. They informed me that 3 runners had not long gone past and that included a fellow Harrier.

At 49½ miles I passed 2 and caught up with Philip. I said hello and offered to run in with him. He was happy to see me continue running, so off I went.

In the last 500m, I managed to catch another runner and sprinting for the line I finished in a time of 11hours 25min and took 12th place. Philip finished in 11hours 28min in 14th place.

Clark ran 31miles in 5hours before pulling out.

Overall I am very happy on a personal level and this is something I have had set and worked towards since January.

Philip entered pretty late in the day and the previous training run of the last 30miles was his furthest too. Even more remarkable is the fact that Philip had run every day for over a year and has continued after the race.