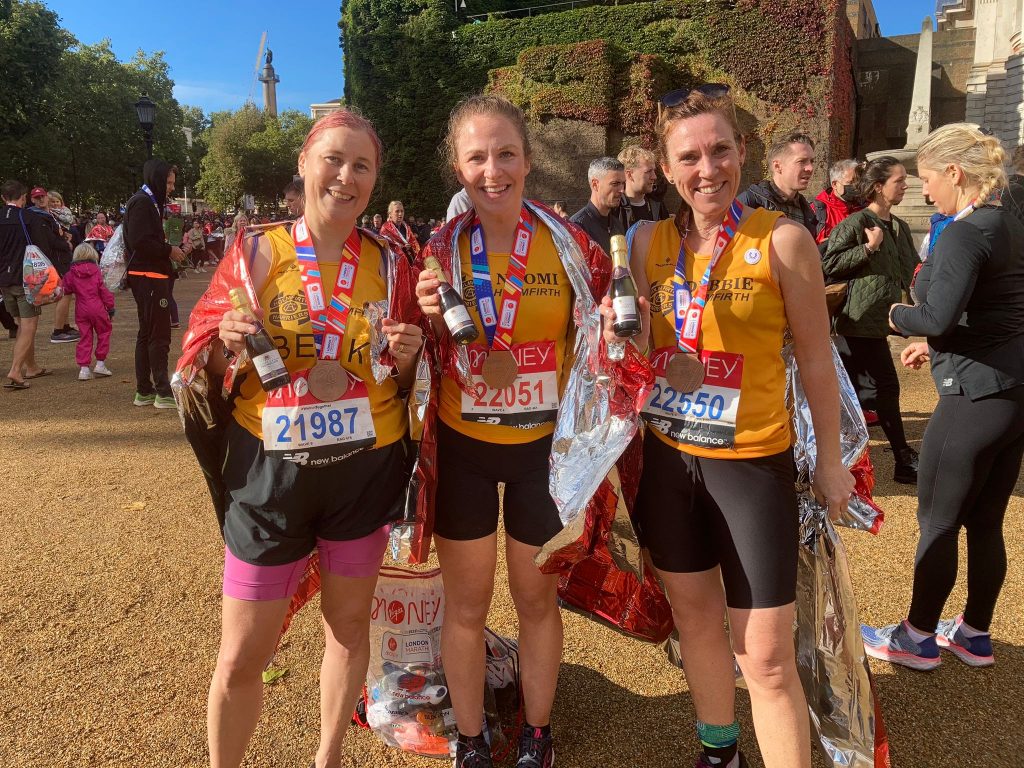 No fewer than eight Holmfirth Harriers competed in the 2021 London Marathon and were supported by quite a gaggle of giddy folks who travelled down to cheer them on, excited to be back at a mass participation event.

The Journey Here – Getting a Place and then … Training

At least half of the runners entered with club places. Becky, Debbie, Naomi and Zoe got places for 2020 and Andrew for 2021. Zoe has deferred her place. The club is allocated a small number of places to award to members upon application. The successful applicants are active members of the club who attend regularly, volunteer and represent the club in races.

Getting a place in the event was hard, but training was even harder than normal this year. With the uncertainty around the 2020 event, most runners were already in training for the first date and then also ramped training back up for the deferred date before it was finally deferred to October 2020 and became virtual. Becky Burdon actually did a full 20 week training for the virtual event and then again for London in October 2021. Every runner has their own story and has worked incredibly hard over years to reach this milestone. Pressure is high as many know this might be their only opportunity.

Becky followed the Matt Fitzgerald 80/20 training plan and cross training to prepare for her race, with about 20 weeks of training. Debbie and Naomi followed plans from Runner’s World which have proved useful and provided results for runners from our club in the past. Why not ask them if you want to pick up tips yourself? Coaches from the club can also provide you with advice if you are interested in preparing for this demanding distance.

“The training I followed was put together based on what I had said I wanted to try over the summer months. With the main focus I wanted to have a go at track racing, I have trained on the track but never raced it other than a grass track when I was at high school (30 years ago). While the track meets were intense, I really enjoyed them, meeting new people along the way. The Holmfirth summer track league was fun and I also enjoyed going to Trafford every 2 weeks for their open track meets where I have met some very well known athletes. The next thing I got put into the training plan was off road running, previously I have done everything possible to avoid off road running (other than the few x country races each year) I’ve now started to gain a liking for it and want to continue off road running when possible to further improve. The off road running was mainly as recovery runs and to reduce the risk of injury from training on harder surfaces. The final hurdle I had was to rehearse the marathon pace until it came the norm through track  and treadmill sessions. The 4 month training journey was fun.”

Tim Brook, a new member, came to the event with some marathon experience (Geneva 2017, Manchester 2018 and Boston UK 2019.) It was his first London Marathon. Asked about his training, he said…

“I didn’t really have a specific training plan. I knew over the summer I was doing a few meaty races which would help keep me in shape: Scafell Sky Race (23.6 mi, 9,000ft climb), Peak Skyline (29.6 mi, 6,500ft climb) and a few weeks ago I did Yorkshireman Marathon (3,200ft climb) which I’ve done a couple of times before. I mixed those races with midweek speed sessions and long road runs when I had time. I also did various trail/fell races over the summer as that’s my preferred terrain. Ordinarily I would probably do a 20 mile road race leading up to a marathon (eg Trimpell 20 up in Lancaster) to hone the marathon pace but I never got a chance.”

A final tip from Tim…

“Don’t try registering at ExCeL on the Saturday unless you’re a big fan of really really long queues. It took me nearly as long to do the bag drop and pick up my bib numbers as it did to run the marathon! “😆

Restrictions meant the start was staggered differently to normal, and the Expo was organised in a different way too. There were a lot of rules and procedures to comply with, including a last minute covid test. There was a definite sense of relief when all this was over and the runners actually, finally, knew they could start.

The crowds, whilst smaller than normal, were still significant and it was hard to spot runners. Damo flew through mile 6 so fast but was just spotted by supporters. At the same point, Becky and Naomi disappeared into the crowds of runners somehow.

“I couldn’t ask for a more perfectly planned day, the weather was kind, the atmosphere was electrifying, the bag collection seemed to go for miles when I was struggling to walk yes I would’ve run for another 1/2 mile at the finish if needed but I couldn’t walk.”

No wonder he couldn’t walk after that time. Damo was also responsible for inspiring another pb of the day…

Matthew rose and Damo set Naomi the 3:45 (good for age) target after the brass monkeys 2020 when she was only planning to just complete the race with her friends … but she is very competitive when given a target.. the rest is history! She had a great race … messed with her watch the night before tried to set a pace which she had not done before then set off. She thought it felt easy and overheard someone say they were trying to complete in 4 and half hours so thought she had set the wrong pace.

“I was running 10 minute miles until I hit mile 20 when I quickly did the maths!”

You never know – it might have helped! Naomi ran an amazing pb time of 3:44.

Debbie Beck and Becky Burdon ran together (despite not planning to) for much of the course. Debbie ran ahead in the end before cramping up on the finish line in from of the TV cameras. Help was at hand straight away and she recovered quickly – probably the best place to become sore suddenly! Becky ran a great time. Tip for all you would be marathoners – London isn’t a pb course. Becky’s Garmin had her running 27 miles! This isn’t uncommon at London with all the weaving between crowds – not many people get to follow to accurately marked blue line on the road… 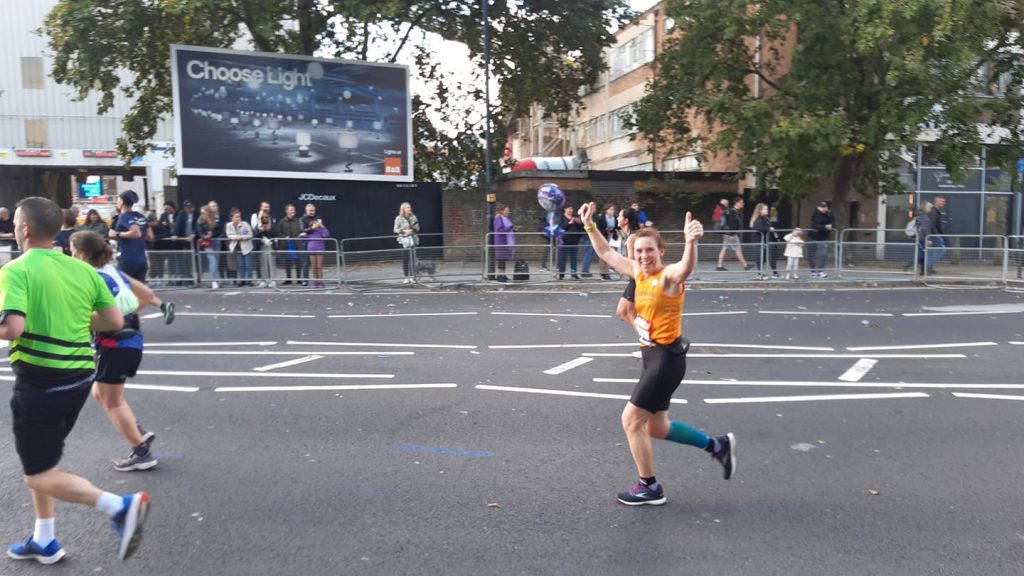 Claire Leader ran a great race. She stopped to help another runner on the course and has commented:

“Remember that not everyone gets to finish a marathon. Watching a guy go over in front of you is quite a sobering experience and it doesn’t matter how much training you have put in that can happen to any of us. Also you have to be fairly stupid to be planning on doing it again 7 days later. As I was walking to Blackheath I heard a lady say to her friend you have done all your training in Denby Dale you can cope with any hills here, I turned round and said oh I’m from Honley, the other girl was from Lindley and had only just met her friend. Very small world.”

Good luck next weekend in Manchester Claire – you must be mad!

Well done to Laura who has been ramping up her training nicely over recent months (4:51) and to Tim (2:49) who is new to the club – fantastic achievements.

Deborah and Andrew had an absolutely amazing day and enjoyed the tremendous atmosphere. Their highlights were running over Tower Bridge, the amazing noise and support and just the emotion and pride felt as running towards the palace at the end. Afterwards they enjoyed a massage and meeting guide dogs in training at their reception. They were also captured having a quick kiss on TV. 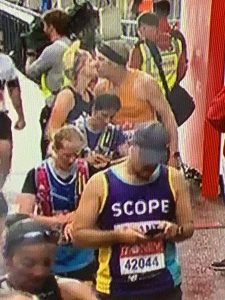 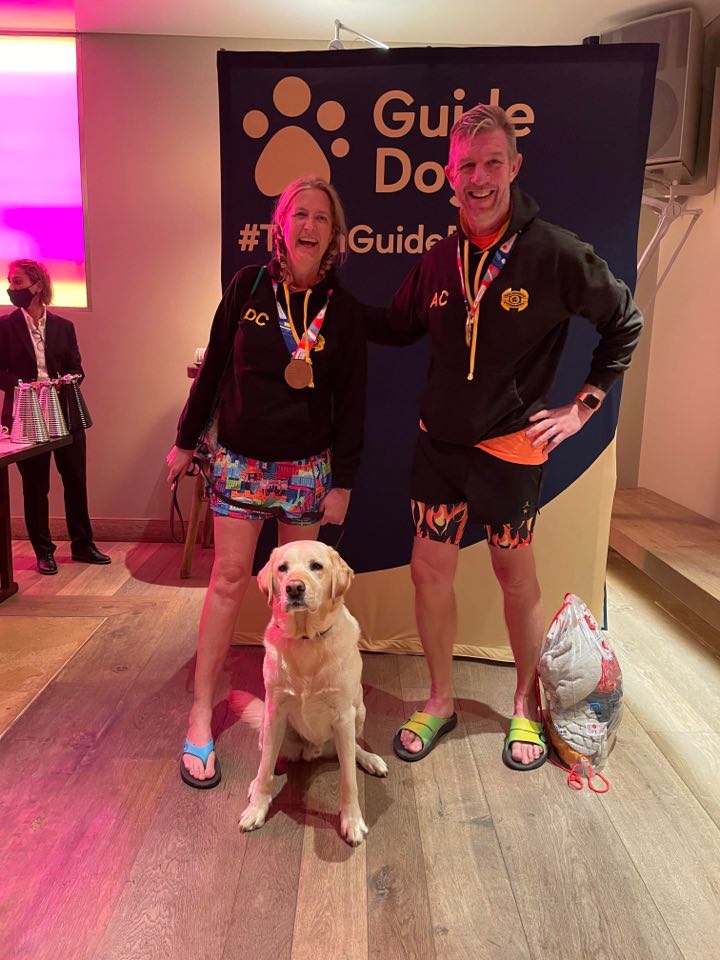 HUGE congratulations to everyone who took part. Who knows where your running will go next?