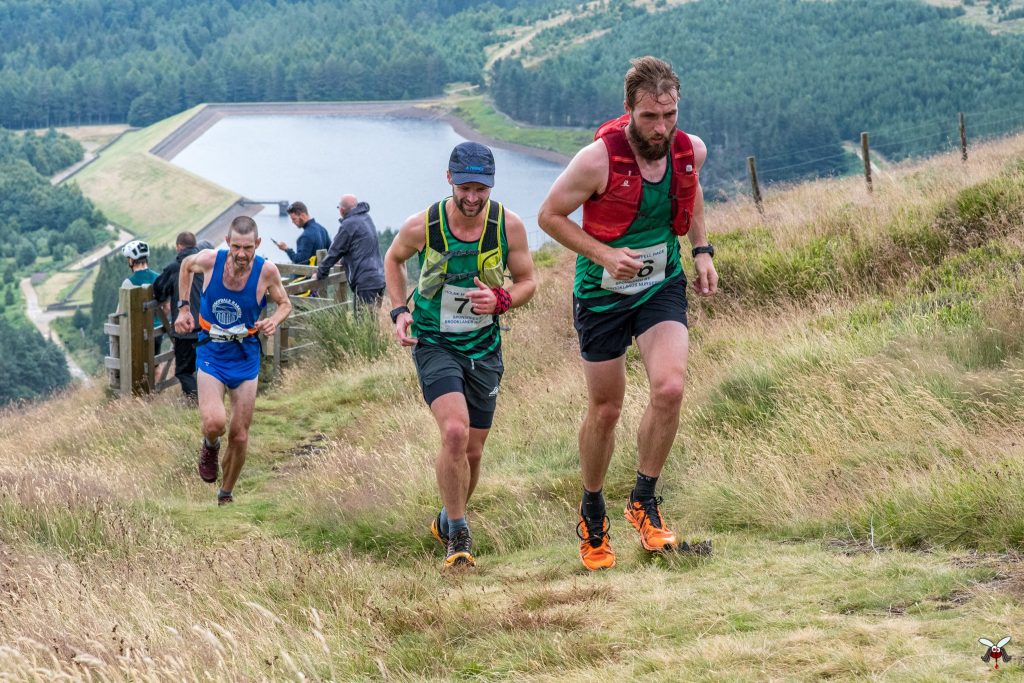 The weather forecast for the day (whichever one you looked at) was supposed to be warm with some light rain from about 2pm. As you know, it turned out to be very wet and windy with poor visibility in many locations. Runners also reported to us that the conditions were very slippery.

Although it wasn’t particularly cold, quite a few of the marshals did get very cold during the long spells they were out on the fells and at the finish field. Our large marshals tent blew down and was irretrievably damaged during the race, while full of marshals and equipment and will need to be replaced with profits from the race. The gazebo used to protect the prizes had to be held in place by 4 people. Then at the end, all the equipment was put away wet. So, it was all very challenging. I didn’t get chance to thank the marshals, but I think you will all acknowledge the massive effort you all put into making this happen.

We had 159 entries (151 pre-entries, 8 on the day) but only 90 starters and only 80 finished, presumably because of the conditions. Only 13 women actually raced, of which 11 finished. 76 pre-entries did not run, presumably due to the uncertainty of whether the event would go ahead or not, due to the heat and fire restrictions in the Peak District National Park. We shouldn’t complain, because that contributed somewhere in the region of £900 and this will enable us to make a massive contribution to the Holme Valley Mountain Rescue Team.

At the front of the race, Dronfield runner Michael Kenyon (Dronfield) seemed to have victory assured after the first descent into Ramsden Clough. However, he did say he lost a considerable amount of time trying to find a way up to Laddow Rocks, but I think most runners say that. At that point he had a scare as he caught a glimpse of Ben Tetler (Glossop) within 2 minutes of him, but then he picked up the pace to finish nearly 5 minutes ahead.

In the ladies’ race, Holmfirth’s Helen Haigh’s victory was never in doubt as she opened up a lead by the finish, of nearly 26 minutes over 2nd placed Imogen Jones (Pennine), who finished first equal in last year’s race.

Slaithwaite Striders won the mens’ team prize easily, with all 3 counters crossing the line together, holding hands, in 3rd, 4th & 5th place. There was no team prize awarded to the ladies as no team had 3 finishers.

All runners & marshals had the opportunity for the free refreshments at the end. The cakes were all donated by Holmfirth Harriers members. The raffle also had 28 prizes donated by club members. The raffle was drawn while the race was in progress, then the winning numbers were stuck on a board, so that people could go home earlier if they wanted to. Tim still hasn’t collected his bottle of Champaign prize.

A massive thank you to everyone who helped with the race, especially in those terrible conditions. It never seems enough to say thank you, especially as many of them were on their feet, or out in the wilds for many hours.

A lot of praise for the marshals was received from the runners. This of course makes the organising more enjoyable. I’ve also received one justifiable complaint and we will take this on board to try and make the event better next year.

We try to make a small profit on the event, but this year we’ve made a lot more money than we intended to. So, we are donating £600 to the Mountain Rescue. This will probably be a one-off donation because next year I’m going to reduce the cost of entry.  We have also, just today, used the income to replace all the first aid kits and we are going to buy a new marshals’ tent from the estimated remaining profit of £310.20.

This year we have experienced serious problems getting this race going, and after all the Covid problems we had last year. We only got the permit from one landowner 10 days before the event, despite applying in January and continuously chasing them up. They are just 1 of 11 stakeholders where we need to apply for permission to run the race.

Then of course, last week we had the extreme heat and fires on the moorland, so The Peak District National Park understandably closed the open access land in the area of the race, with the probability that it would not be open over the weekend. Race preparations were put on hold, but on Friday morning I was able to confirm that the National Park would be open from Saturday at midnight, so we hastily resumed all the preparations.

The event requires about 50 marshals to be able to run. It’s widely recognised that this event is too big a job for one person. Moving forward we will need to form a committee to manage all the tasks such as:  managing permissions, entries, results, banking, flagging and cutting, flagging, refreshments, general equipment, marshal recruitment, marshal equipment, prizes, raffle, first aid, display notices, race day set up & event retreat, race promotion communication to the Harriers website & Facebook, race reports and co-ordinating. If we don’t get volunteers for these tasks (acting as a committee), then the race will definitely die out.

The date of the next race is provisionally on 23rd July 2023.