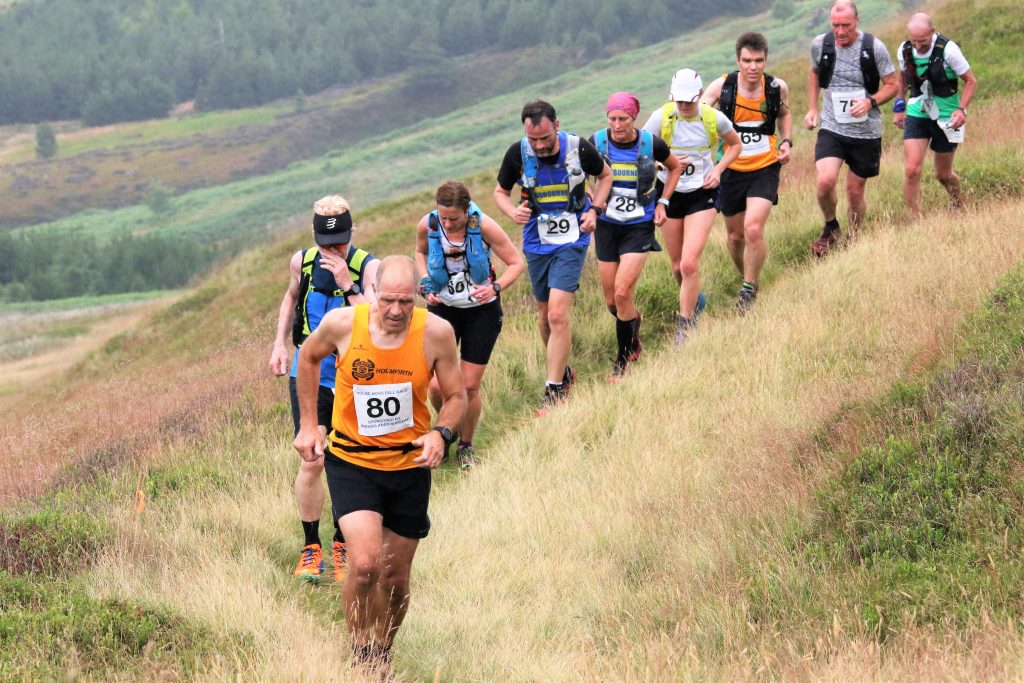 Hi everyone – bit of a damp one this week, but hope you’ve managed to get out & dodge the showers.

Another month gone, so it’s time for the latest Fell update, with another busy month, split either side of the heatwave, which was definitely too hot for walking, let alone running!

Well done to everyone who either ran or helped out at last Sunday’s Holme Moss race. As you know, it was touch & go whether the race could go ahead after the heatwave & the fire on the moors, but thankfully, we had some rain that dampened everything down, so Andy & Jean got the nod from the National Park & the race could take place. Unfortunately, the weather forecast was rather unreliable & we all got very wet & blown about in the strong winds!

We had 7 Harriers amongst the 90 starters & first back, apparently ‘taking it steady’ was Helen Haigh, who pipped Curtis Firth on the line, finishing 15th overall & 1st lady in 3.17.57, whilst Curtis was 16th in 3.17.58 – a great effort in his first attempt at the race. Another race novice, Jamie Wood, will be the first to admit he suffered in the 2nd half of the race, but still clocked a decent time of 3.27.56, finishing 26th overall, whilst Phil Hewitt, who seems like he’s been around for ages, but was also running the race for the first time, stuck it out to finish 31st overall in 3.36.38. Mike Sanderson, banking on the race being called off, had already raced twice in the week, so looked a little weary, but still did very well to finish 33rd overall in 3.40.35! Keith Baird had another solid run, finishing 43rd in 3.56.13, whilst last but not least, Barbara Hinchliffe battled round in the worst of the weather to finish 55th overall, 6th lady & 1st FV60 in 4.12.47.

Clearly saving themselves for this weekend, we then had 4 runners taking part in the Montane Lakeland 50/100 event from Coniston, with some tremendous performances from everyone involved on what will have been a very soggy night/day in the Lakes. Martin Page had some unfinished business in the 100 after last time & judged his race to perfection, finishing 15th overall in 25.29.54. David Milton has taken part in a few of these races now & has earned his t-shirt, finishing in 34.18.18 – probably won’t be at S&C tomorrow!  In the 50, Tim Brook was taking on this distance for the first time & will have been pleased with his performance, finishing 26th overall in 9.35.39. Matthew Rose broke his foot in his first ever fell race & ever since has steadfastly stuck to the road, up until this year! Having followed his training on Strava this year, he was definitely in the right shape to take on the 50 & must be so pleased to have completed the race in 11.33.13 – well done fella!

Elsewhere, you’ve all either been recovering from past efforts or saving yourselves for new ones, as I can only see we’ve had a few racing at the last Trunce (No.6), so well done Mark Law, Sophie Cromwell, Barbara Hinchliffe (1st FV60) & Richard Whale.

As I mentioned last time, we have started the planning for the October Fell Relays. I have pre-entered 2 teams in the Hodgson Brothers on Sunday 2nd, so hopefully we’ll be accepted for both once again. And entries open tomorrow for the British Relays, which are in the Scottish Borders on Saturday 15th. I’ve had a few volunteers so far, but really need some firm commitments so that I can weigh up how many teams to enter. The club pays for the entry fee & the hire of the minibus for both events, so you’ll only need to contribute towards the fuel. And as we’ll be staying over on the Friday night at least for the British, the club will also subsidise any accomodation costs. So please let me know ASAP if you’re available for one or both!

In terms of the Fell Champs, we have 2 races coming up in August. You should all have seen the email from John Ewart regarding the Denis Stitt on Thursday 11th August – so if you’re not planning on running, then he will be able to find a job for you on the night, so please volunteer your services!  A week later on Saturday 20th, it’s the Burnsall Classic – a true short, sharp, up & down race! Sadly, there is no road race this year, so we won’t have anyone completing the double. However, Graham Ellis is organising a Parkinson’s Awareness Walk on the 10 mile route, setting off at 11.00am, so if you can support that event, you’ll be finished in plenty of time for the fell race!

Elsewhere in August, we have a few local races to have a go at, including:

That’s all for now. Don’t forget to let me know about the Relays.