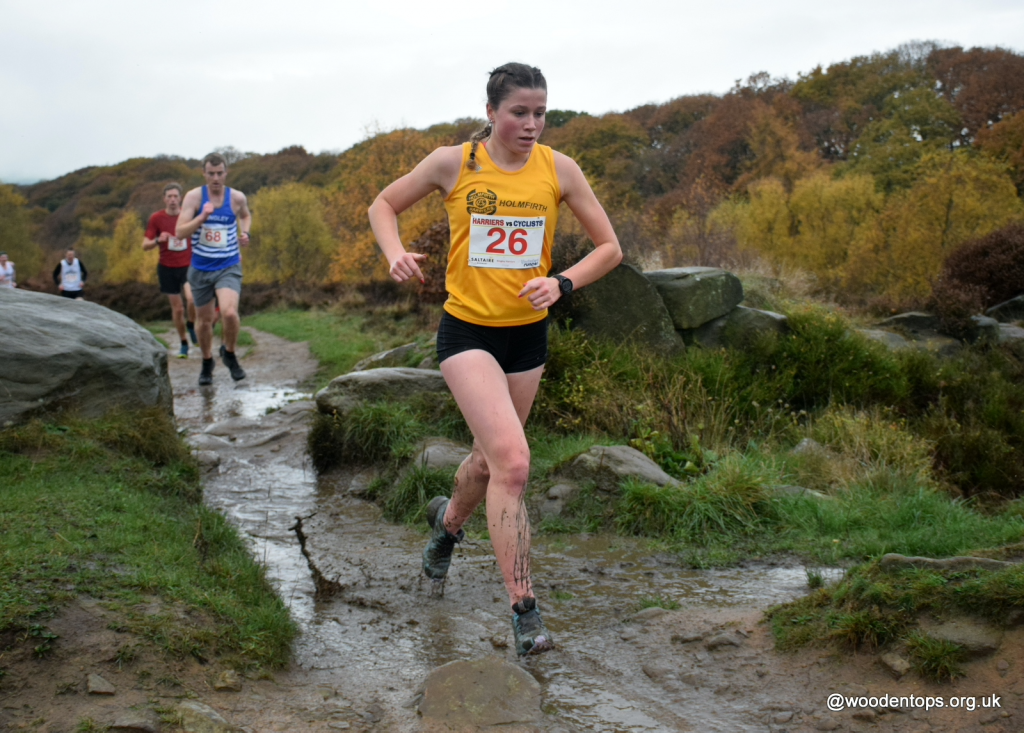 Time for the latest Fell update/review for November – the clocks have gone back, the days are short, but there’s always the weekend for some fell-running!

First up we had the Yorkshire Vets Champs at Cop Hill on Sunday 6th November – Rob has reported elsewhere on the Vets successes, but we had 24 Harriers competing in total (including new recruit Jamie Harris) & picked up plenty of open prizes as well, including Helen Haigh (1st lady & 1st FV45), Sally Coldwell (5th lady & 2nd FV45), Fran Whitworth (1st FV50), Karen Sinkinson (1st FV60), Barbara Hinchliffe (2nd FV65), Elaine Stewart (3rd FV65), Andy Hauser (3rd V65) & Kevin Yewlett (3rd V70). In addition, Helen, Sally & Fran bagged the Ladies prize. Well done to all who raced – I think we all got a little wet towards the end of the 2nd lap. Steve Frith was out snapping as usual & took some great shots of us all in varying degrees of suffering!

Doesn’t look as if anyone made it over to deepest Lancashire for the last race in this year’s Champs, the Tour of Pendle, so many congratulations to Tim Brook, who topped the Mens leader-board with an impressive 246 points, just pipping Adam Sunderland (238 points), Curtis Firth (204 points) & Keith Baird (169 points). As well as completing 8 of this year’s races, Tim also took part in all 5 of the fell relays we entered, as did Adam, demonstrating great commitment to the Holmfirth cause! Unfortunately, none of you Ladies completed enough races to count, so here’s to increased involvement next year.

Finally, it was the Lee Mill Relay over in Rossendale on Sunday 27th November. Big thanks to Jean for rallying the troops, who all looked to have enjoyed battling the bogs! Jean has already reported elsewhere on the race, but special mention for the Ladies team of Katie Walshaw, Helena Croft, Sophie Cromwell & Fran Whitworth who won the very handsome Ladies team trophy by over 10 minutes. And well done to recent recruit Di Baldwin, who survived her first fell race in about 45 years!

For the juniors, their last outing was over at Shepherds Skyline on Saturday 5th in what would have been some testing conditions, so big shout out to Arthur Gibbs who won the U9 race, and his sister Florence, who was 2nd GU13. In terms of the Champs, we have a few juniors who have completed the required 4 qualifying races, so well done to Isaac Morris (BU11), Bethan Morris (GU11) & Izzy Richardson (GU19) on winning their categories.

Elsewhere in the month, reckon I’ve only spotted a couple of you racing (unless you tell me different), so well done to Jamie Wood, who Legged It Round Lathkil and Harried the Cyclists and to Erica Byram, who was also at Harriers vs Cyclists and took the fastest lady prize – nice one! Certainly looks like an interesting race that one  – result is based on the first 10 runners against the fastest 10 cyclists & this year, the runners beat the cyclists, which probably takes some doing!

I’ve started planning next year’s Fell Champs & as with last year, the Section Secretaries/Captains are liaising to try & avoid too many clashes throughout the year. First up is likely to be Stanbury Splash, as it’s such a good race to introduce people to the fells, followed by another reasonably local race, Flower Scar, which has been an English Champs race in the past, so will be a good test for us all.

Don’t forget it’s the Tinker Cup on Saturday 17th – if you’re not planning on racing, then please offer to volunteer – I think Diane still needs a couple more marshals/helpers.

Finally, some fairly local races to have a go at in December/early January:

The Stoop (Haworth) – junior & senior races – Sunday 18th (for those whose legs aren’t too mashed from the Tinker Cup)!

Auld Lang Syne (Haworth) – Saturday 31st – pre-entry only, but not full yet.

Wormstones (Glossop) – Saturday 31st – pre-entries open, but will be EOD – a few of us did this last year & it’s a great little race, organised by Des Gibbons, starting & finishing at The Beehive pub, so round off your race with a pint! I’ll be there again this time. Here’s the link to enter:

Giant’s Tooth (Ogden Reservoir, between Halifax & Keighley) – Sunday 1st January – supposed to be pre-entry, but haven’t seen the link go up on SI Entries yet.

See you at the Tinker Cup (if not before).