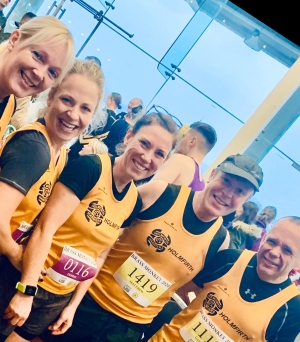 The Brass Monkey seems to get a lot of negative press at the Harriers – much I feel is understandably the result of a crazy registration system which puts many of the less patient off.  In the past, the registration system has been horrendous – opening at silly o’clock, being slow, unresponsive and often crashing due to the number of entrants eagerly trying to get a place. This year registration opened at the more convenient time of 8pm (Sunday 2 September 2019) and was full by 8:43pm with a good few Harriers securing a place.

For me this would be my eighth time taking part in this event. I like the race, it’s not too far away with HQ located at York Racecourse, it’s well organised and a good fast course; the only challenge is the weather and thankfully for this year, whilst wet, it was mild with calm conditions.

The race starts at 10am so doesn’t require such an early start; leaving Holmfirth at 7:45am we arrived at York Racecourse at our scheduled time of 9am. As per normal, parking and pre-race organisation was near perfect and with 15 minutes to go, after a brisk warmup  we headed towards the start.

The conditions were wet with light rain and a promise from the met-office, conditions would improve. Perhaps we were too far back as I didn’t hear the start gun. I shuffled towards the start with Damian and as we arrived at the timing mat we picked up pace and were off.

One thing we’d established in the car heading over, we’d all been a little indulgent over the festive period. For Naomi, she’d also had the pleasure of a trip to Thailand – ideal for life enrichment but possibly not the best prep for a half marathon so soon after her return.

The course is a quick course on closed roads, reasonably flat with just a couple of climbs. The roads were wet, flooded at times but in the main the conditions were good for running. For this year, the organisers had replaced plastic bottles with plastic cups – stations were signed well in advance and there were plenty of officials available to get you around safely and provide encouraging words of support.

Ten Harriers completed the race, first home for Holmfirth was Ben Parkin in an impressive 1:22:25.  Close on his heels and currently running very well Damian McQueen finished with a new PB of 1:24:37. With perfect preparation of an evening in York boozing, Garreth Humphries ran a gutsy first half marathon finishing under 1:30 in 1:28:46.

For Damian, Naomi and Debbie, these performances bode well as they start their training for the London Marathon in April.

The momentos were delightful, and a change from the norm of medals and t-shirts – how about a “chilli-esque” drinks bottle and block of shampoo – magic!

The race winner was Richard Start of North Derbyshire RC in 1:07:33 and for the ladies Lorna Young of Leeds City in 1:18:30.

Certainly a race I’d recommend – registration can be a pain but I’m finding that’s the same for any popular/fast course. Keep your eyes peeled towards September 2020 and get yourself entered 🙂