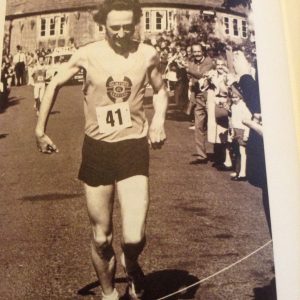 We are saddened to hear the death of Edward  Crosland  who died on Sunday 4th April 2021 aged 73 years. Holmfirth Harriers offer their sincere condolences to his wife and his family

Ed joined Holmfirth Harriers in 1965 aged 17 and was club captain from 1969 to 1973 and again from 1974 to 1976. He was instrumental in the continuation of Holmfirth Harriers in the late 1960’s. Training runs commenced from his parents cellar in New Mill, Trevor Ramsden’s parents kitchen in Washpit and Barrie Stacey’s home in Netherthong. Barrie was predominantly a track athlete, with a vast athletic knowledge, which Ed embraced to the full. Trevor was simply his best friend, a friendship that lasted a lifetime.

Ed competed on all surfaces, cross country, fell, track and road. At this time 10 miles was the benchmark for road racing, the surface and

He continued improving his times during 1971, and was recognised as the leading Holmfirth athlete with a personal best of 52min 45sec when finishing 27th in the 1971 Derwent Water 10

Ed’s advancement and his role as club captain which he took very seriously rejuvenated the club. He was now edging his way to every road runners aspiration, the sub 50 minute club. Coaching was not a concept embraced by Holmfirth Harriers at this time, you just ran. Ed teamed up with new work colleague Bill Dance and a motivational partnership developed with lunch time runs along the Huddersfield canal.

This partnership ensured his progression and again he improved his personal best to 51.38 when finishing 10th in the 1972 Scunthorpe 10. Ed was now chasing individual honours not just faster times, finishing 4th in the Yorkshire 10 mile championship, Roundhay Park Leeds in 51min 29ec. Consistency was now evident in his performances finishing 3rd in the Burnsall 10 again in a personal best time 51.19.

Ed produced one of his best runs, not over 10 miles but 15 miles in Holmfirth’s 1972 annual K & M 15 finishing 3rd in 76min 21secs. This performance supported by team colleagues David Cliffe and Rod Brook secured Holmfirth Harriers the team victory.

In the 1973 York Rowntree Mackintosh 10, his 6th place in a high quality field, produced a personal best and new club record of 48min 50sec. Becoming Holmfirth Harriers first runner to break not only the 50 minute barrier but also sub 49 minutes. Success continued In 1974 winning the  Ferriby 10 mile road race, in 50min 46sec.

Ed was now at the high point of his athletic career and these performances were inspirational to other Members, moving the club forward and enhancing the name of Holmfirth Harriers AC.