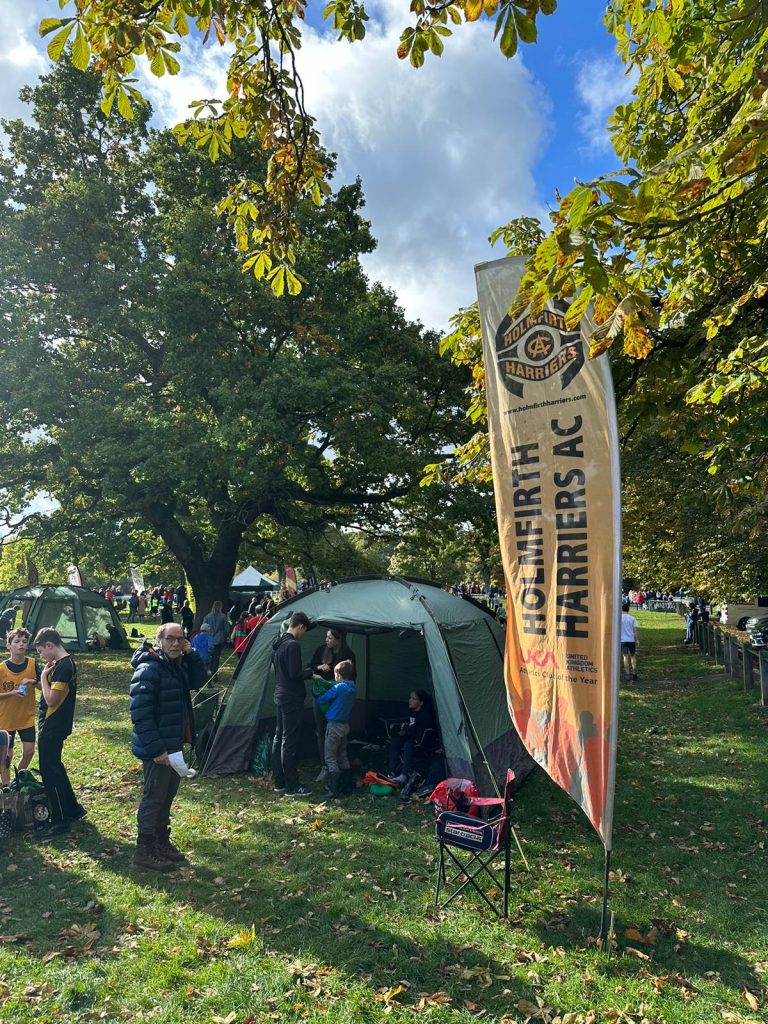 The Cross Country season kicked off on Saturday with the first race in the West Yorkshire League series, hosted by Skyrac A.C.  at Nunroyd Park in Guiseley.  The weather was glorious, and almost too warm at times for racing, but a super day for spectators and surprisingly dry underfoot despite the recent rain.

The Under 11s got the club off to a great start with team medals in the boys finishing third, led by Henry McFarlane in an excellent 2nd place. Lewis Bentley was 17th and Isaac Morris 21st. Also representing Holmfirth was Ewan Plumb in 27th and Isaac Courtney in 31st.  The U11 girls went one better to finish second team; with counters Bethan Morris 7th, Sophie Senior 9th and Soraya Thomas 16th.  Amiya Bradshaw was 20th and Saski Wright 30th.  An excellent turnout from this age group! 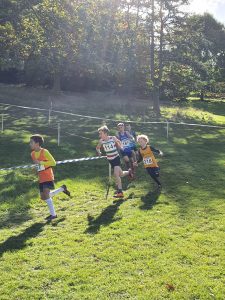 Henry on his way to 2nd place, and Amiya and Soraya before the start of the U11 Girls.

The team success continued in the Under 13 boys, with Alexander Burke in 7th, George Smith 10th and Bobby Morris 21st giving the team third place.  Alexander Dalton was 38th and Alexander Elliott close behind in 40th.  Annabelle McFarlane (25th) and Florence Gibbs (45th) raced in the U13 girls and were unfortunately one short to finish a team.

Joey Mclaughlan was the sole representative in the Under 15 boys, finishing 45th and in the U15 girls it was good to see five athletes taking part, with Emily Wood 30th, Isobel Coulson 35th and Sophie Mayes  45th giving the team 9th place.  Florence Jones finished in 60th place.

In the Under 17 races Jack Sunderland was 15th in the men’s and Annie Mclean 13th in the ladies.

An unfortunate clash with the National Road Relays at Sutton Park on the same day meant that a few of Holmfirth’s senior women were missing, however it didn’t stop those that had opted for the cross country dominating and winning the team event,  giving them a great start to the series.  The fixture clash appeared to have affected other clubs with only 63 finishers, compared to around 80-100 in most of last season’s races.

Claire Leaver-Hewitt made her usual rapid start in the 5500m race, chasing the lead group into the second lap.  Helen Haigh gradually worked through, overtaking Claire around halfway in, with the pair finishing 4th (20:25) and 5th (20:37) respectively.  Helen was also 1st V45 and Claire 1st V40.  Jo Jones, a relatively new member of the club, seemed to very much enjoy her first cross country race in perhaps thirty years, finishing in a credible 24th (22:48) and 3rd V45. Kath Farquhar completed the team points not far behind in 34th (23:46).  Unfortunately Jo Bailey-Taylor had to retire due to an injury. 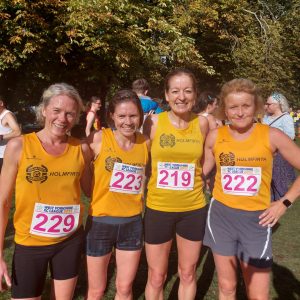 More photos can be found on https://twitter.com/WoodentopsFR

The next race in the league is at Thornes Park in Wakefield on Sunday 30th October. Anyone else wanting to enter can do so by contacting Chris Beadle, Cross Country Secretary, and paying before 20th October.