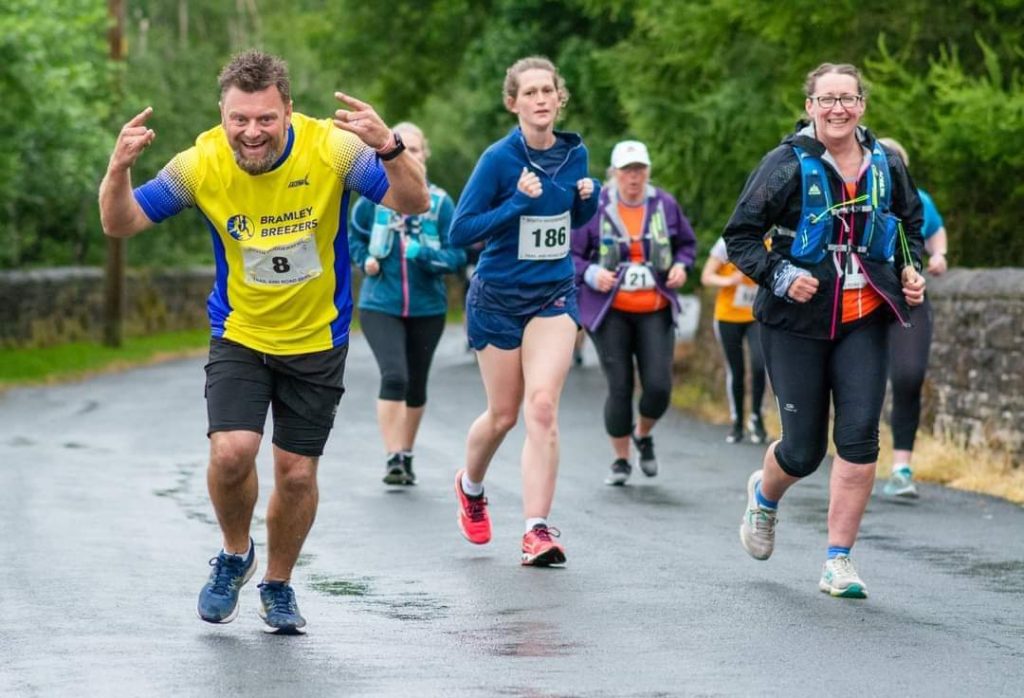 An unseasonably cold wind, overcast and a touch of drizzle heralded the Holme Valley 5 miler, the latest race in the South Huddersfield Road and Trail Series.  Not what was expected for the last Friday in June.  The uncertainty over the weather was reflected by many of the runners:  trail shoes or road shoes ?  leggings or shorts ?  long sleeves, t-shirts or vests ?  In the end all of the above made an appearance for what was a well organised out and back run from Holmbridge along tarmac to Brownhills Reservoir then loose stone, sand and puddles past Yateholme to the turn-round 2 ½ miles later. This was the second running of this event and saw 162 competitors from clubs across the area.

Following strict covid rules, runners were discouraged from congregating in large groups as they registered and made their way to the start.  As the race was chip-timed, runners assembled in socially distanced groups of 30 and set off in several waves meaning that 5 miles later, the winner could not be crowned until everyone had finished.

There was a good turnout from local clubs with Meltham, Barnsley, Denby Dale, Stadium and Holmfirth shirts all in evidence.  The route has an ascent of 500 feet (150 metres), nearly all of it in the first half as it twists and turns up the valley towards Holme village, although it feels like more than that.  The well placed marshals and other supporters on the course gave loud vocal encouragement to the runners which was very welcome.

With particularly bad timing, the main event organiser, Jon Burdon, caught covid-19 a few days before the race (thanks to the generosity of his daughter) and so with the whole family isolating a number of last minute volunteers ably stepped up to the plate.  Thanks must go to them for making sure the event could go ahead and for ensuring that the race was well run and safe.  I’m pleased to say that Jon and family are recovering well and Jon hopes to be out running again in a week or so. He would like to say THANKS especially to Mike Jones and Rob Kersey who took over as stand in Race Directors and well done to Mike who is a new member of the club for taking this on.

It was good to see a turnout of 25 registered athletes from Holmfirth with our new Road secretaries trying hard to form the required teams of 5. In 2019, the inaugural event, we proudly won both team trophies. That wasn’t to be this year but that wasn’t due to lack of a good turnout from our club, so thanks everyone for representing your club.

Chatting to competitors afterwards everyone agreed that the course was challenging, the event was well organised, the marshals were fantastic and that maybe trail shoes were preferable, particularly in the soft sandy bits on the sharp right hand corner about 2 miles in !

Teams results were for teams of 5 male or 5 female athletes, no mixed teams or vets teams.

The overall results can be found here.

Racing is only part of the story….