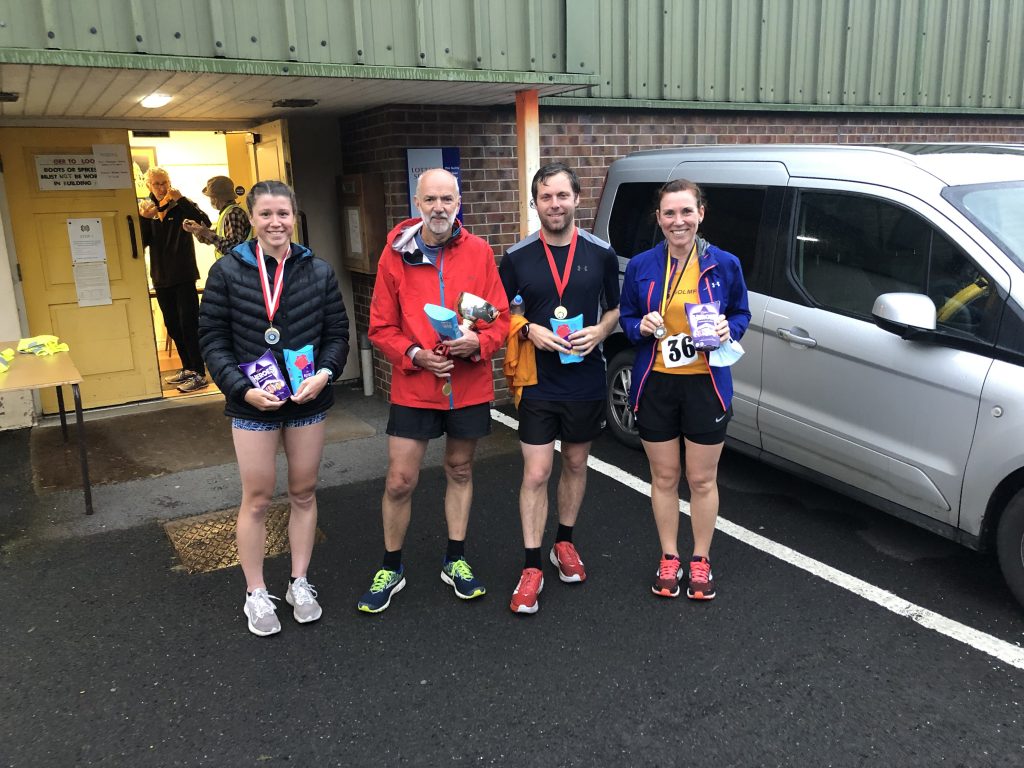 25 runners, 18 marshals and 1 cyclist prepared themselves to be drenched as the waterproof numbers were collected and start times pondered for the Club 10 mile race. The route was a relatively flat course with just over 500ft of elevation but mentally tough with New Mill Road featuring not once but three times.

Like the Club 5 mile race, handicaps are calculated before the event and positions were worked out with the runners actual time and handicap meaning that the trophy could be presented to any athlete.

With pre race instructions that everyone should aim to finish the route by around 8.15pm, the runners set off from a lamppost ‘somewhere close to’ Rockmill Road, in two groups.

The course was basically two loops. The first shorter loop cuts down Smithy Place to re join New Mill Road before heading back to the same spot but this time carrying on to Holmfirth then to New Mill before turning back towards Honley.

New member Jack Walker led the way in the first group showing himself to be a strong runner by setting himself such a challenge for his first race. First and third handicap winners were also part of this group although they didn’t know it yet. Coming down Smithy Place allowed time for some smiles, forced or otherwise, as Sean Doyle braved the rain, to kindly take some fantastic photos.

14 runners made up the second group. It didn’t take long for eventual fastest time, first female and second handicap winner Lucy Byram to pull away – although Alexander Hannay was never far behind. Lucy finished in an incredible time of 1.01:19. Alexander held his position as first male in 1.01:46.

Thank you to all the marshals and in particular Nikki Crust who, for a second time, swapped her trainers for her bike to follow the runners home as a sweeper.

Well done to all the runners with so many performances to be proud of.

Full results are on the following link

The latest Club Road Championship leaderboard is on the following link

Photos are also available on the Club 10 page