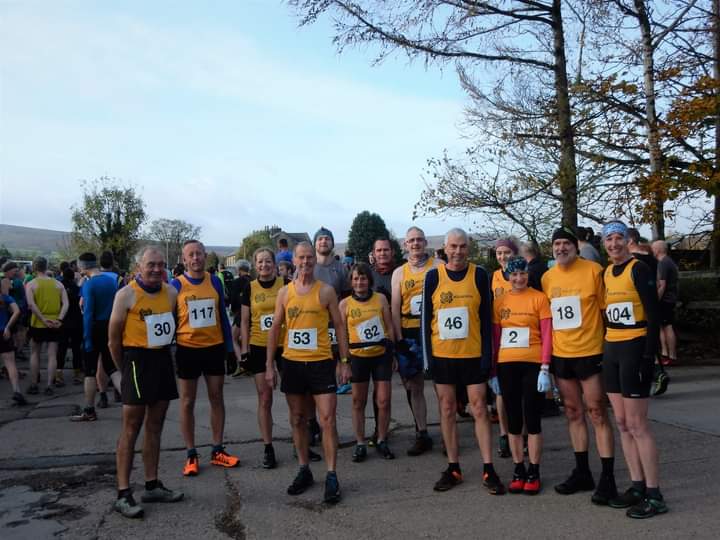 Well done to everyone who’s been out racing over the last few weeks – have seen some snaps of amber vests here & there, including Jean Shotter at Race You To The Summit, Tim Brook with an excellent 4th place overall & 1st V40 at Soyland Moor, Keith Baird at Dunnerdale, Curtis Firth & Graeme Smith at the Wadsworth Half Trog, plus Jean again at the Litton Birks Loop!

We had an excellent turnout of 16 Harriers at the recent Cop Hill race on Sunday 7th November, which was doubling up as the Yorkshire Vets Fell Champs, so attracted a decent field, particularly amongst the local clubs. Rob has reported elsewhere on the Yorkshire Vets medal tally, but there were plenty of prizewinners in the open categories, including Adam Wakelin (2nd MV45), David Williams (1st MV60), Kevin Yewlett (2nd MV65), Neil Midgley (2nd MV70), Helen Haigh (2nd Lady & 1st FV45), Fran Whitworth (2nd FV50), Jean Shotter (1st FV55) & Elaine Stewart (2nd FV60), so congratulations to everyone!

I’ve started looking at the races for next year’s Championship, so if anyone has any suggestions for a favourite race that we haven’t been to for a while, please let me know! I’ll definitely try to include a couple of the English Champs races, including the new Lower Borrowdale race (which is near Tebay, not Keswick, to add to the confusion)!

Don’t forget it’s the Tinker Cup on Saturday 18th December, so make sure you’re fit & raring to go for the club’s premier race! And if you can’t race, then I know we’re still looking for marshals on the day, so please let Rob know if you’re available. You can enter & volunteer via this link – The Tinker Cup.

There are a few decent races to consider in the run-up to Christmas, plus a couple around New Year that are worth a shout as well if you haven’t over-indulged! Next Sunday 28th, it’s the Lee Mill Relay, where Jean has rustled up 3 teams (Mens, Ladies & Mixed) to head over to Rossendale for the 10k, 4-leg race – let’s hope the legs hold out!!

Other races of interest coming up:

That’s all for the time being – see some of you at Lee Mill & am definitely headed to Mytholmroyd, so can offer a lift across.