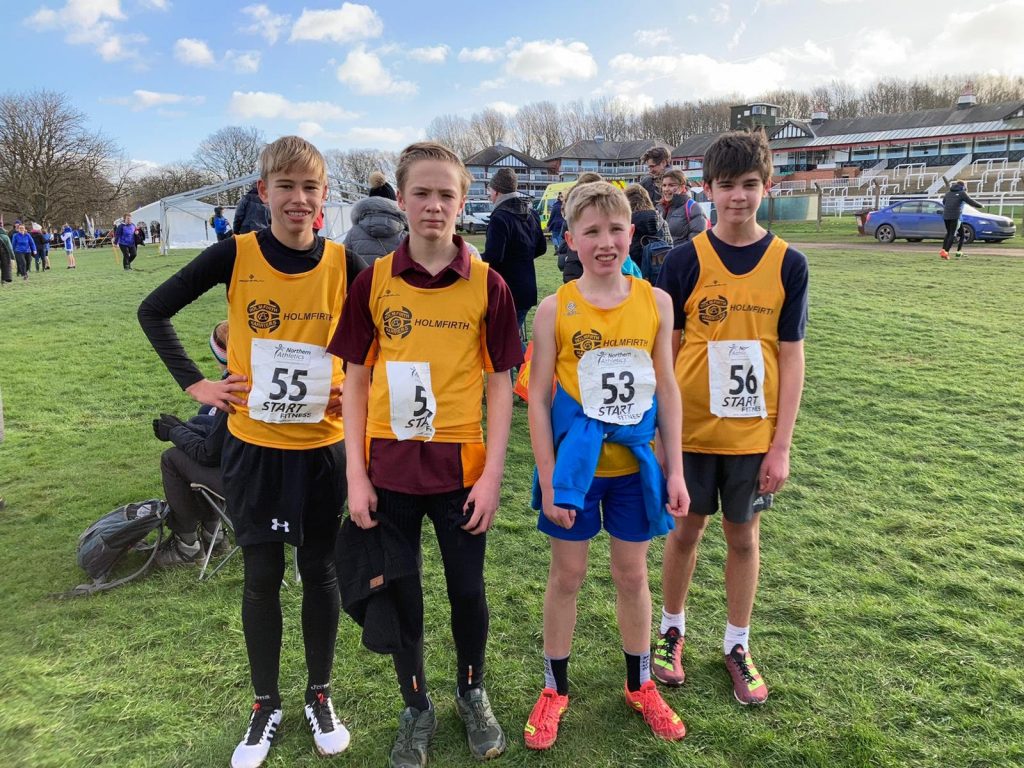 Pontefract racecourse provided an excellent venue for the Northern Athletics Cross Country Championships on Saturday 29th January.  The course stretched from the start and finish area in front of  the Grandstand down towards the M62 motorway and was great for spectators to view.

This Championship event consists of clubs from every county across the North of England and the standard is extremely high, with many GB internationals leading the field. Holmfirth Harriers had a number of athletes competing.

The course was firm and fast, and somewhat flatter than the Harriers are used to, but the strong wind was certainly a challenge and tested strength! It was so windy that club tents were banned and the changing marquee was taken down to avoid it ending up on the M62!

The Under 17 women were the first to brave the wind, with Isabel Richardson having an excellent run to finish in 14th place. Annie McLean was not far behind in 31st and Elena Inch bravely battled on to finish in 74th. Unfortunately, Holmfirth Harriers were one short for a team result in this age group, with four people needed. 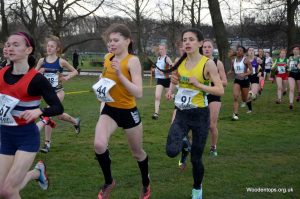 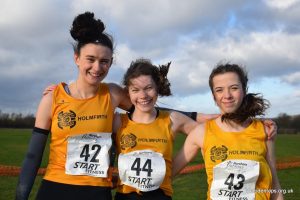 Photos courtesy of Woodentops; left Isabel Richardson and right; Elena, Isabel & Annie being blown around by the strong winds!

Rory Bryant was the only Harrier in the Under 17 men’s race. Rory looked strong as he powered through to finish in an impressive 30th place.

Harry Gilligan for the U15 boys finished a credible 112th, with Emily Wood and Sophie Mayes running well against tough opposition and a strong headwind in the Under 15 girls’ race, finishing 82nd and 111th, respectively.

The only complete junior Harriers team of the day was in the Under 13 boys’ race. A fantastic turnout in their first race at this level saw the team placed 14th overall, thanks to George Smith (78th), Harvey Baxter (89th), Charlie Straw (97th) and Ollie Joyce (103rd). 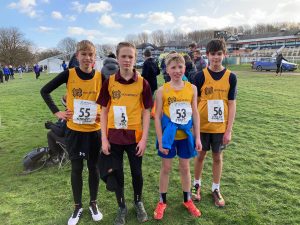 The Senior Women’s race was held over a two-lap, 8km course.  Despite having a smaller turnout than previous cross country events, the team demonstrated their strength and excellent form to finish 5th team, behind teams from much larger towns and cities. Julia Jagger continued her good form, running strongly to finish in 21st. There was a good battle between Ruby Sykes and Helena Croft, with Ruby taking the edge on the final run in to the finish line, to take 38th ahead of Helena in 45th. Helen Haigh was the final team scorer, still not up to full fitness, in 56th. Claire Leaver-Hewitt was just 5 seconds behind in 59th place. Unfortunately Zoe Storr had to retire mid-race due to injury. 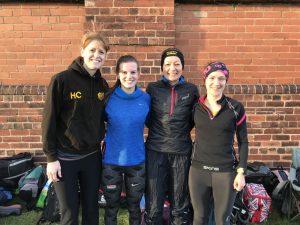 In the Senior Men’s three-lap 12km race the Harriers had a number of new faces competing, which was great to see.  Kai Sunman had a great race in 59th. Phil Hinchcliffe, in his first cross country race since moving to Holmfirth from Rochdale Harriers, proved a valuable member of the team finishing second counter in 126th. With Jamie Wood, another first-timer in this event for Holmfirth, 150th, Jonny Mclean in 214th, Alex Hannay 248th and Men’s Captain Damian McQueen 262nd, the men finished 17th team.  In a field of over 500, the men produced a good turnout, with five others completing the race; Neil Dutton 352nd, Gavin Baxter 399th, Kevin Dessoy 419th, Chris Beadle 479th and President Rob Kersey 500th

The club also had volunteers helping set out and marshall the course, for which they received deserved thanks from Northern Athletics.  Roger Bradley, Tim Cock and Phil Senior were probably more tired than the athletes after a very long day in such windy conditions!

The teams will next be in action at the English National Cross Country Championships, which  this year is being held at Parliament Hill Fields in London on 26th February.