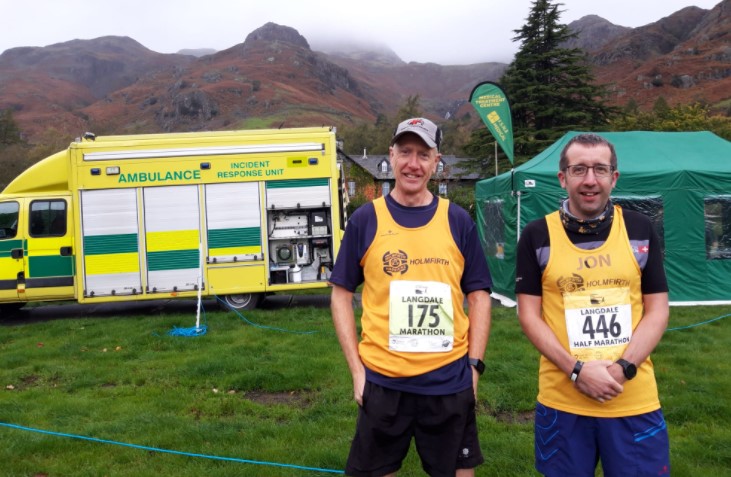 Langdale Marathon and Half Marathon October 2021

The 33rd running of the Langdale Marathon and Half Marathon was held on Saturday 23rd October, organised by The Brathay Trust and starting and finishing in Great Langdale in the Lake District.  The course consisted of one (or two laps) of a 13.1 mile circuit and the run is advertised as the UK’s toughest road marathon. 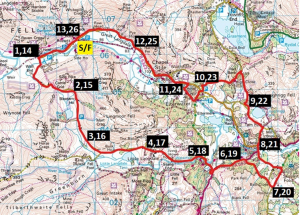 Jon Burdon and Kevin Dessoy from Harriers made the trip to Cumbria, planning to do the full run but a few days before the race, Jon dropped to the half due to illness.  The fact that he didn’t pull out completely is testament to his determination.  On arrival at the car park the main decision was what to wear.  The forecast was for a cool breeze but dry and when they got there, there was more than  a hint of drizzle in the air and the sky was very grey.  Having decided on T-shirts under the amber vest they made their way to the start area.

The organisers had arranged staggered start times from 9:40 for those that wanted them, followed by a mass start at 10:30.  Jon and Kevin elected to set off at 9:50 although as it turned out as the race was chip timed, you could cross the start at pretty much any time.

The first wave set off promptly and Jon and Kevin followed soon after, not quite waiting for the official 9:50 time and setting off with a small group of others.  The first mile or so is fairly flat and is a good warm up for the first major hill of the day from the valley end up to Blea Tarn on the way to Little Langdale. 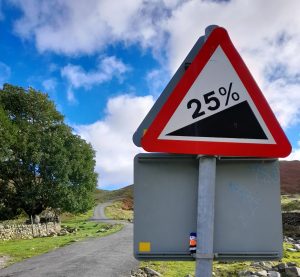 At the start of the Blea Tarn climb

Jon and Kevin were determined to run all the way if possible and so passed several walkers on the way up. 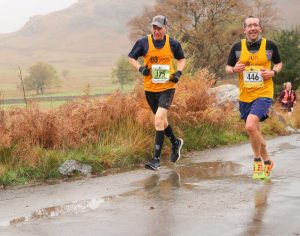 At the top of the Blea Tarn climb – looking remarkably chirpy

The first water station was a welcome sight particularly as it was crewed by Harriers Andy and Deb Clarke who had volunteered to help with the race and provide the loudest cheers at the sight of the amber vest.  There followed a long down hill into the picturesque village of Little Langdale with a few more supporters outside the Three Shires Inn.  The route then followed the narrow lanes to meet the main road before detouring off to the right to go through Skelwith Fold before re-joining the main road at Skelwith Bridge.  The main road crossings were well marshalled with Stop/Go boards for the cars ensuring that runners were able to get across safely.  After Skelwith Bridge the route hits the second major climb of the day at Foulstep Hill, another 25% incline that  hairpins back and forth up to Loughrigg Tarn, hugging the side of Loughrigg Fell.  Common sense says that for every ascent, there has to be a descent and so it proved down into the small village of Elterwater.  This was a steep and long slope down which left the knees and quads screaming (well, it did mine anyway).

A pleasant detour through the Langdale Estate led back to the main road at Chapel Stile and the undulating tarmac back to the finish.  Jon and Kevin parted ways here and the announcer on the PA recognised that by saying that Holmfirth were bidding a fond farewell as Jon ran through the gate to finish and Kevin started the second lap.

Elevation profile for the full distance

Which was pretty much like the first although a lot fewer runners.  For much of the second half there was only the occasional glimpse of another competitor although the marshals made up for that with their support and encouragement.  At Elterwater we were joined by a couple of e-type Jaguars and it was pleasing to pass them on the narrow sections where they had to wait for runners.  You could certainly hear the roar of the exhaust coming up behind afterwards.

And so to the finish where loud applause greeted everyone crossing the line. 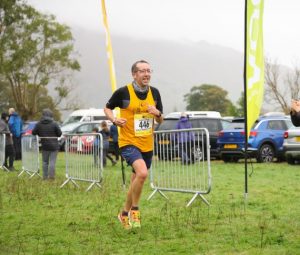 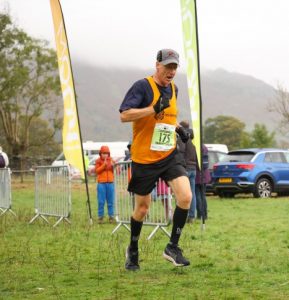 The full race was won by Jarleth Mckenna from Bristol and West AC in a time of 2:41:34

The authors apologise for lack of photos of Jon at the finish.  He was faster than his support crew expected and so they weren’t there to meet him !

This was a tough road race and as always, thanks must go to the organisers, officials, first aiders, marshals and all competitors  for making this a thoroughly enjoyable event.  It is well recommended to any Harriers wanting a bit more of a challenge and given that there are five pubs on the course it could be a perfect place for a Road section vs Fell section friendly….