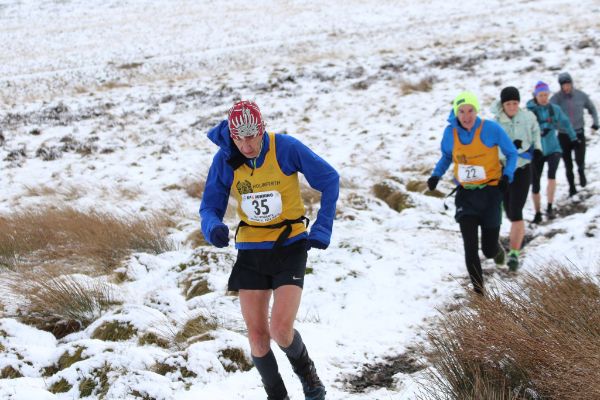 March 2020 – who could have predicted this?! In lockdown now, but for a couple of weeks, it was nearly business as usual, so best report on that, as could be the last opportunity for a while!

First up, the juniors had the Hoppits Hill races on Sunday 1st March. Organised by Nicky Spinks, these races are a great introduction to fell-running & we had 7 juniors taking part over the various age-groups, some for the first time I think. Tightest battle had to be in the U15 Boys, where Declan Levay just managed to hold off the challenge of Jack Sunderland to win the race in 17.33 (from Jack’s 17.35), with Harry Gilligan just behind in 4th place! Congratulations also to Annie McLean, 3rd GU17 & to everyone else who gave it a go – likely to be a while before they’re out there again. Great also to see Jack’s dad Adam having a bash at the senior race, coming in a very respectable 23rd overall – one for the future!

For the seniors, at least we had the opportunity to go out in style, with a great day at the Ian Roberts Memorial on Sunday 8th March. In its current incarnation as an out-and-out race, rather than the Fell & Road Relay it started out as, we had a record entry of 154 runners which was great to see. Thankfully, decent visibility & a few more flags (& marshal points) meant we didn’t have a repeat of last year’s moorland wanderings and most of the field managed to get back before the brief hailstorm turned the time-keepers finish sheets into papier mache! As well as all the marshals & other helpers (many thanks once again) & considering it was also the Yorkshire Vets XC Champs on the same day, we still had a decent turnout of 15 Harriers for the race itself. We managed to pick up a couple of prizes, including Helena Croft (40th overall & 3rd lady), Fran Whitworth (64th overall & 1st FV50), Barbara Hinchliffe (99th overall & 1st FV60) and Bill Hunter (134th overall & 1st V70), as well as the ladies team prize with Helena & Fran joined by Lucy Farquhar – hope you all enjoyed the wine!

Sadly, the racing was brought to an abrupt halt the following weekend after the first of the British Champs races in Wales, with the last race taking place being Des Gibbons’ Lads Leap on Sunday 15th. At the time of writing, there will definitely be no races taking place until at least 1st June & in all likelihood, it will be some time after that before we can all get together again. As you know, I’ve had to cancel the West Nab races this year, as it just wasn’t possible to find a date later in the year that didn’t clash with the XC season, other re-arranged fell races or shoots on the moor! The good news is that we’ll still be selected to host a Junior English Champs race in 2021 – the planning starts now (from a safe distance)!

And the organisers of the Calderdale Way Relay have confirmed that our 4 entries for this year’s race will be carried over to 2021, so at least we don’t lose out there.

Finally, other results of note this month are as follows: