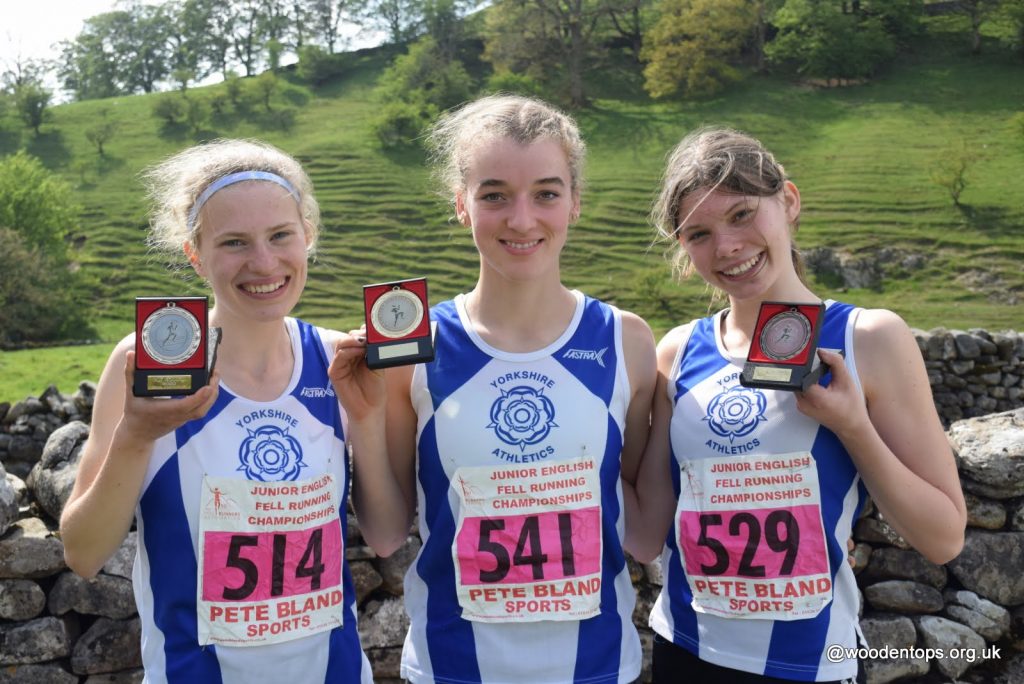 Afternoon everyone – hope you’re all enjoying the extended Bank Holiday weekend. Here’s the latest Fell Section update for May to whet the appetite for the summer.

Potentially, the juniors had a very busy month, with 3 of the English Junior Championship races to go at. First up on May 7th was Todd Crag in Ambleside, but unfortunately it doesn’t look as if anyone made the trip up. Then it was Whernside on May 15th, which was doubling-up as the junior Inter-Counties race. It was left once again to Izzy Richardson to fly the flag, which she did in some style, having been selected to run for Yorkshire. She had a great race, finishing 4th FU19, thereby claiming the individual bronze Inter-Counties medal & helping Yorkshire to team Gold, so many congratulations to her. 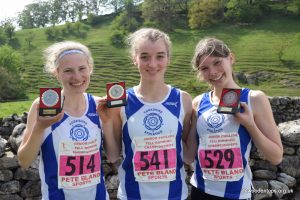 Finally, on May 22nd, it was the Guisborough Woods race, but sadly, no Harriers made the journey to the North Yorks Moors.

For the seniors, it was then a return to local (& not so local) rivalry at this year’s Calderdale Way Relay on Sunday 15th May, where once again, we managed to put out 4 teams (48 runners) – the traditional Open, Ladies & Vets teams, plus the famous Cote de Holme Moss team, which is always a mixture of new & old recruits, some willing, some press-ganged! This is a great team event & I’m pleased to say that there were lots of smiling faces from everyone who took part! At the sharp end, the race was won by perennial winners Calder Valley in 6.01.58, ahead of Barlick (6.18.47) & Wharfedale (6.27.58). For the record, the Open team finished an excellent 6th overall (6.41.21), the Ale Stars were 29th overall (8.02.31) and the Cote de Holme Moss were 41st overall from 88 completed teams (in 8.45.00). The Ladies couldn’t quite match last year’s heroics & had to settle for 2nd place (38th overall in 8.29.08), swapping places with Barlick, who won in 8.09.51. Individually, results of the day included Lewis Byram & Aaron Kettlewell posting the 2nd fastest time on Leg 6, Alex Robinson & Joe Minchella 4th fastest on Leg 3, as were Tim Brook & Phil Hinchcliffe on Leg 4, whilst Olivia Dyson & Annie McLean had the 2nd fastest Ladies time on Leg 3, as did Helena Croft & Julia Thomas on Leg 4.

The following weekend saw the next race in this year’s English Champs, the Lower Borrowdale Skyline, which is a new Medium race on the fells near Tebay. 3 Harriers made the trip up the M6 & once again, Tim Brook was first home, finishing 91st overall & 13th V40 in 2.03.14. Close behind was Curtis Firth, 130th overall in 2.11.02, followed by Keith Baird, 237th overall & 24th V50, all picking up valuable points for the Senior Fell Champs.

Many congratulations to Katie Walshaw, who earned another senior Yorkshire vest at the Inter-Counties race on Saturday 7th May, this year held in Llanberis at the Moel Eilio Ridge race. She had a great race, finishing 4th lady & 1st Yorkshire counter, helping the county to Team Silver.

Elsewhere, there was plenty of opportunity for people to get out & about, with Tim Brook 5th overall & 2nd V40 at Coiners, plus another great turnout at the 3rd Trunce, including Declan Levay (2nd Junior Male), Phil Hinchcliffe, Kath Farquhar (3rd FV50), Dave Milton, Barbara Hinchliffe (1st FV60), Kevin Yewlett, Ruth Churchill-Dower, Diane Lee & Richard Whale. And special mention to Stu Sharp, who won the South West Traverse on 29th May – a 45 mile, 6500 foot race, going from The Lizard to Lands End, along some spectacular coastal paths – looking forward to the report, Stu! Again, if I’ve missed out anyone racing, please let me know – always good to mention sightings of amber on the hills.

Coming up in June, the seniors have Harden Moss on Saturday 18th, followed by the Kinder Trog on Sunday 26th, whilst the juniors have a month off. As I mentioned last time, I’ve volunteered to organise the Harden Moss race this year, so I will need a handful of helpers on the day if anyone would like to volunteer! Locally, there are a few other races to have a go at, including a new race at the Big Stone (near Chinley) on Saturday 5th, Knowl Hill on Saturday 12th, Brown Wardle on Wednesday 15th, Trunce 5 on Monday 20th, Ogden Midsummer Madness on Wednesday 22nd & finally either Cragg Vale or Eddies Revenge on Wednesday 29th!

Hope to see you all soon.