It is with great sadness that we announce the death of Dave Gledhill (81), who passed away peacefully on Monday 28th November after a short illness.  Dave joined Holmfirth Harriers in the late 1970s and was key to many team events at the club, both athletic and social, with the highlight being the record breaking Pennine Way Relay attempt in 1986 when he, as the oldest member of the team (44) had the honour of touching the wall at the Border Hotel to complete the new course record of 29 hours 7 minutes 58 seconds.  A photograph of the team can be found on the wall at the Neiley clubhouse. 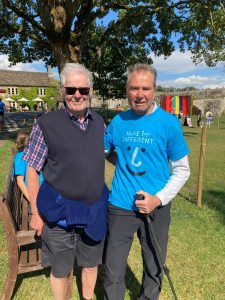 David’s favourite event was the Fellsman Hike, a gruelling 12 hour event in the Yorkshire Dales. Just completing the distance within the allocated time was an achievement. Dave achieved this 21 times consecutively between 1977 and 1997 more than any other Holmfirth Harrier..

Dave’s legacy was the Marsden to Haworth walk covering 28 miles on the 28th December each year during the 1980s. The walk is the predecessor of the current Christmas walk which takes place on 28th December from Holmfirth, taking in Holme Moss, Black Hill and Blackpool Bridge. A distance of approximately 13 miles.  This will always be Dave’s walk and this year will be a special memorial to Dave.

We extend our condolences to Dave’s wife, Val, and children Mark and Samantha and family.

Funeral will be at 10:30 on Wednesday 21st December at Huddersfield Crem.

Pictured below, front row second from left, on one of Dave’s favourite events with the Harriers; the Welsh Weekend. 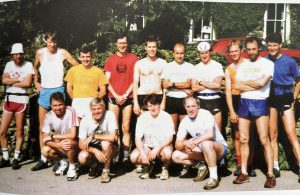