It is with sadness that we announce the death of Brian Boothroyd (92) who died recently. Brian joined the club in 1967 after a period with Longwood Harriers, where he won their 1 mile Championship, and at Holmfirth won the Tinker Cup in 1989/90 and was runner up to Trevor Ramsden in the 1973-74 Winter Championship. Brian was still running in his later years.

He was club Treasurer for four years in the 1970s and contributed far more to the club than just his running.

Funeral is Monday 19th December 11:15am at Huddersfield Crem.

Brian is pictured far right below, at the 1976 Club Presentation Evening. 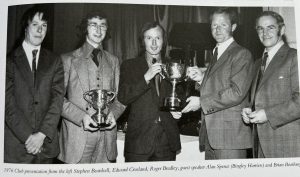